The general population does not always feel engaged by Kassel's modern art show, but the Documenta 14 wants to change this. Even before its opening on June 10, several participatory projects are underway. 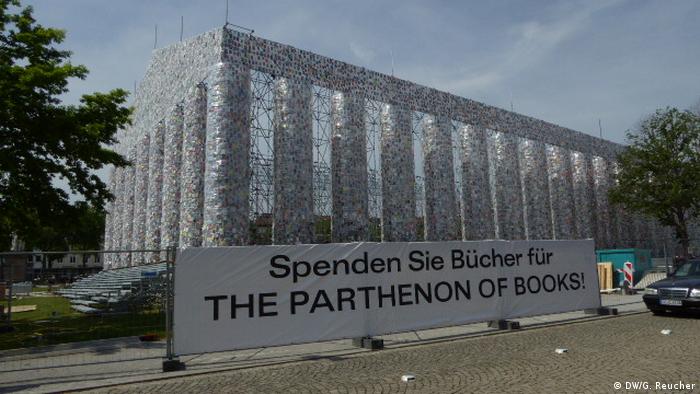 A life-size reproduction of Athens' most famous landmark, the Acropolis, stands on the Documenta's central square in Kassel, the Friedrichsplatz.

"While I was in Athens, I didn't think it would ever fit in this space," says the art educator Diana Rothaug, pointing to the huge steel frame reproducing the temple in its original size, while people are still screwing and hammering the structure in progress. Books wrapped in plastic bags hang from the pillars and the roof. The work, called "The Parthenon of Books," is by Argentine artist Marta Minujin. 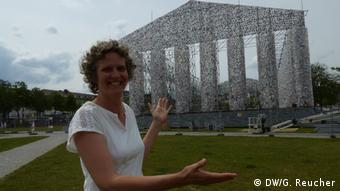 Diana Rothaug is impressed by "The Parthenon of Books"

One can't walk past this artwork during a guided tour without a stop to discuss it, says Diana Rothaug. As an art educator for the Documenta 14, she is already planning what she will be telling visitors during the tours. She finds the artwork is a beautiful symbol for democracy.

"The Parthenon is accessible through steps all around it. I find this very inspiring. It will become a wonderful meeting place."

The pillars of "The Parthenon of Books" are not completely covered by books yet. A huge sign calls for book donations, more particularly "forbidden" books, which were either censored by authorities or whose authors were persecuted.

The temple reproduction is to carry up to 100,000 books. The location of the installation is also symbolic: The Nazis burned some 2,000 books in May 1933 on Friedrichsplatz. 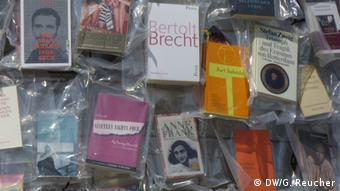 Forbidden books: Many among them were burned by the Nazis

The Parthenon is one of many art projects calling for the population's participation during this Documenta. A special department is dedicated to public education. Its employees not only organize workshops for the art educators like Diana Rothaug, they also put artists in touch with the residents of Kassel through various projects.

Public education is important at the Documenta

One of the projects of the public education program is called "Lose Fäden" (Loose Threads). For some time already, women with immigrant backgrounds meet at a sewing circle and discuss topics related to the Documenta, such as the oral transmission of knowledge.

Anton Kats is working on another project dealing with the transmission of art. The Ukraine-born artist spent some time in Germany as a refugee and developed ontacts with people in Kassel ahead of the Documenta. With his initiative "Narrowcast House," he developed projects with cultural organizations, which could end up being part of the Documenta.

"The goal is to listen to the neighborhood, to learn from each other and to undertake something together," says Clare Butcher, coordinator of the public education department.

Why the Documenta's art educators form a 'Chorus'

Starting June 10, 150 art educators, known as members of the chorus, will be connecting the population with the Documenta's works. They are not only there to provide background information about the artworks, but to initiate dialogue and debates. 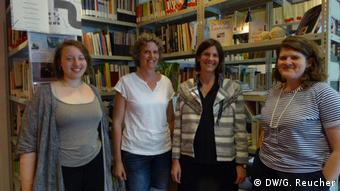 The term chorus is used in reference to Ancient Greek plays. During the performances at the time, "the chorus could comment on what was happening on stage," says Clare Butcher. It was normal for the Greek chorus to temporarily switch roles by interfering in the play - and this has inspired the Documenta's concept for public education.

"It's about shifting power relations and hierarchies," Butcher explains. "Who has something to say? Which voice is relevant? Who do we listen to?"

'The concept of this Documenta is more radical'

Keeping hierarchies flat, crossing borders and changing perspectives: Those are central themes of this Documenta, held both in Athens in Kassel.

Chorus member Doro-Thea Chwalek was also active as an art educator at the previous art show, held five years ago. At Documenta 13, they were not called members of the chorus, but rather "Worldly Companions."

"The idea was to connect different fields of knowledge with the art," says the teacher of the previous Documenta. "It was part of the concept that our personal knowledge should be integrated in our reflections on the artworks."

She finds the concept of the artistic director of Documenta 14, Adam Szymczyk, even more radical. At this Documenta, artists, artworks and exhibition curators shouldn't be more important than the visitors. According to the concept, there is no hierarchy: "Every perspective, every point of view is different and has its own meaning for every given person. We are trying to bring these different voices to ring together: That will create the Documenta's overall sound."

The numerous voices of the Documenta will not always sing in harmony. Art educator Diana Rothaug can already imagine which artworks will spark heated discussions. 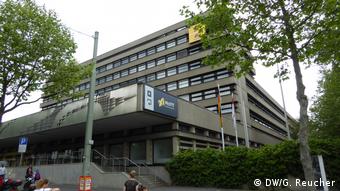 The Nordstadt district of Kassel will also host Documenta exhibitions, including some at the Alte Post gallery

For example, she is already thinking about how she will talk about the work by American-Nigerian artist Olu Oguibe with the visitors.

It's an almost inconspicuous grey concrete obelisk, erected in front of a department store in the center of the city, right by the Nordstadt district - a neighborhood with a high concentration of people with an immigration background, but which is undergoing an important gentrification process.

The obelisk features a Bible quote, "I was a stranger and you took me in," in different languages. Rothaug knows that discussions related to the refugee issue can become heated. She plans to stay open to dialogue with people who are against accepting refugees in Kassel.

The sound of the Documenta's chorus - of the people visiting the art show and of its artistic contributors - will only start resonating when the event opens in Kassel on June 10, after its Athens leg is completed.

Every five years culture vultures make the pilgrimage to one of the planet's biggest art exhibitions. This time around Documenta is in Kassel and Athens – and features political art reflecting reality. (10.04.2017)