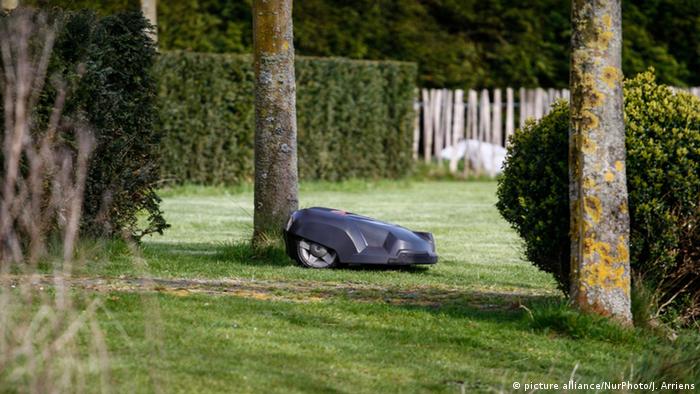 Robot lawn mowers are a good example of where intelligent machines can replace boring, repetitive work

On a recent visit to the German town of Rheinsberg, my husband and I stayed in a charming bungalow with a beautiful garden whose central feature was a wooden swing which hung from a large, old tree.

The young man who greeted us on arrival was solicitous, guiding us through a well-stocked country-style kitchen, a cozy living room lined with books and a map detailing the main attractions of the town.

Just as he was preparing to leave us to settle, he issued an apology. "I'm sorry about the grass," he said. "We've been having some issues with our mower."

Not that we would have noticed ourselves, but the lawn did indeed look a little unconventional, with streaks of wild growth coexisting alongside impeccably trimmed sections.

He motioned in the direction of a hedge, where a small, disc-shaped machine was parked. "It's not performing as it should," he said.

Over the course of our three-day stay, the robot lawn mower became an uneasy presence in our lives. Once, as we were enjoying a dinner of tortellini on the terrace, I got the fright of my life when from the corner of my eye, I spotted a free-roaming object emerge from the shadows and begin to roam clumsily around the lawn.

The garden, with its unforeseeable bushes, swing and tree was a challenge to the machine, whose response to unfamiliar objects was to back off, startled, only to doggedly pursue an alternative course. The result was an intensification of an already comically irregular pattern.

The more conscious we became of our own robot lawn mower, the more we noticed its brethren elsewhere on our travels. In the lakeside town of Bad Saarow, its kind were abundant, often employed to manage the lawns outside restaurants and villas. In some places, signs had been erected to warn passersby to heed the machines. Their creeping whir became a soundtrack to our waterside drinks.

Like many others I suspect, I have an ambiguous relationship to automation. I marvel at robots performing complex surgery, disposing safely of bombs and reducing time spent on boring, repetitive tasks. At the same time, I shudder in horror at the idea of Amazon's unstaffed grocery stores, where cameras monitor your every move and sensors identify how many packets of tofu you pick up. Similarly, I am frustrated by my own propensity to feed big tech companies with my data, only to complain when it is spat back out at me in the form of uncannily appropriate advertisements for electric pianos, nipple cream and furniture I can't afford.

If automation was on the march before the pandemic, it has now accelerated into a gallop.

According to the International Federation of Robotics, COVID-19 has been the single biggest driver of change within the industry. At a time when human-to-human interaction became hazardous, nothing else was to be expected.

With so many people still suffering because of the virus, it can seem like a luxury to discuss more abstract questions, like what trends represent progress and which regression. But we are doing ourselves no favors by neglecting to observe the bigger picture, especially during a crisis.

Over the past few years, there have been some spectacular examples of the failures of automation. The two Boeing 737 MAX crashes in 2018 and 2019 which killed 346 people were caused by a software problem that lowered the nose of the plane, causing the pilots to lose control. Human failings, including cutting costs on safety, were undoubtedly also to blame.

A similar shortage of investment in humans alongside technological advancement has led to spectacular failings in social media algorithms too. In 2019, Facebook's content moderation system failed to detect the terrorist attack in Christchurch, New Zealand, resulting in a 17-minute live video of the horrifying incident being streamed live on its platform.

These are two extreme examples of failed automation. But even in more benign cases, it's worth asking: does the benefit outweigh the cost?

In 1997, we learned that a machine could beat the world's best player at chess. Nearly a quarter of a century later, we have not developed a tournament for machines, and the name Garry Kasparov slips off our lips more easily than Deep Blue, the computer that defeated him. Perhaps this is because chess, unlike work, acknowledges human fallibility as a key component of its modus operandi.

Naturally this brings us back to lawn mowing. As I watched the robot discs bumbling their way across pastures, bumping into hedges and loungers like an apprentice gardener plagued by performance anxiety, I realized I had been overlooking one of the most essential qualities of automation: a near-human capacity for imperfection. As we rush to share more pastures with our robot colleagues, we would do well to take heed of this particular characteristic.

Labor negotiations for 22,000 dock workers on the West Coast are causing anxiety among US industries who fear disruptions to trade. The dock workers' union says automated ports are job killers and less productive.