Dissident family shattered by justice system in Iran | Middle East | News and analysis of events in the Arab world | DW | 07.03.2017

The Iranian journalist and human rights activist Narges Mohammadi was a thorn in her government's side. Now she is in prison. Her husband and children still hope she will be released. A portrait of an incomplete family. 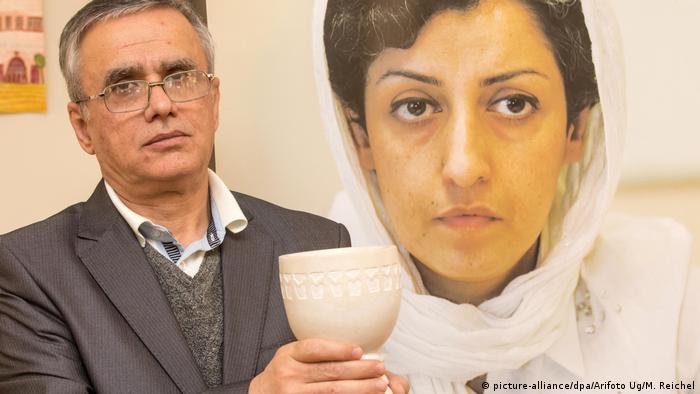 "The ministry official told me we had to go," Narges Mohammadi wrote from her prison cell in an August 2015 letter addressed to her children, Kiana and Ali. "I tried to get Kiana off me. She was hanging on with all her strength, her arms wrapped around my neck. She was wailing." Mohammadi was writing about the day that "broke her heart." It was the first time that her children had to watch as their mother was taken from her home and thrown in prison. They had just started kindergarten at the time.

Over the next couple of years, the children had to witness many similar situations. Each time they watched helplessly as their mother - or sometimes their father, who has also been persecuted for his journalism - were arrested at their home and then taken off to jail. The twins cannot recall any happy family memories: Too often, one of their parents was absent, and the fear of the next separation is too present.

Now 10 years old, Kiana and Ali have lived in exile in France with their father, Taghi Rahmani, since July 2015. Their mother is in Tehran's infamous Evin prison. Last May, a court in Iran's capital found her guilty on several counts and sentenced her to 16 years.

Mohammadi received 10 years in prison for her public opposition to the death penalty and for "forming and managing an illegal group." She was given a further five years for "gathering and conspiring with the aim of committing crimes against national security." And one year was added for "propaganda against the state." She could be released before serving all 16 years of her sentence, as Iranian law stipulates that, when people found guilty on multiple counts must only serve the longest of their sentences.

Rahmani cannot say with certainty how his wife is doing behind bars: He is not allowed to visit or speak with her. "The last time I saw her was five years ago, when I had to leave for France," Rahmani told DW. He left Iran to protect himself.

The journalist has been arrested and detained five times himself for reporting on religious modernization and for his own political involvement. "In all I spent 14 years in prison, two of them in solitary confinement," Rahmani said. He added that the isolation and loneliness were the worst parts of it all.

Rahmani is completely dependent upon secondhand reports from others to help him determine how his wife is doing. Relatives living in Iran have contact with Mohammadi. "She is being treated normally in prison and is not being tortured," Rahmani said. It is conspicuous that he expresses himself with such extreme caution.

"It is known for its inhumane conditions," the International Society for Human Rights reported in its description of the Evin prison. "Eyewitnesses report that prisoners are abased, humiliated and tortured on a daily basis. Furthermore, the prison, originally built to house 320 inmates, is chronically overcrowded." Moreover, ISHR found that Mohammadi, like many other political prisoners, is being "treated especially bad."

Mohammadi is being denied medical treatment. She is extremely sick, suffering from a blood clot in her lungs, as well as a neurological illness that leads her to have repeated seizures and signs of paralysis. "She became sick in prison," Rahmani said. "That is where her illness was diagnosed." He added that her condition is stable at the moment and she is receiving medicine, but "her illness is incompatible with the prison - that is why her condition is constantly worsening."

Amnesty International is of the opinion that Iran's insufficient medical care for its prisoners is a violation of its pledge to uphold human rights. Last June, the organization reported that "the denial of medical care could be equivalent to a violation of the absolute ban on torture and abuse."

Germany's government has also made appeals to Iranian authorities for Mohammadi's release. "She should be released from prison immediately considering her extremely poor health," Bärbel Kofler, Germany's federal human rights representative, said in a statement released after the verdict against Mohammadi last May. "Iran must finally uphold its human rights responsibilities and respect the rights of its citizens." So far, all such appeals have gone unheeded.

It is difficult for the twins to hear how poorly their mother is doing so far away and not be able to do anything to help her. "My son is very understanding," Rahmani said. "He is trying hard to comprehend what is going on and to help me. My daughter is much more rebellious. She doesn't understand it, and says that we have a right to be together as a family." The children, unlike their father, have the right to speak with their mother: "They are allowed one call a week, on Saturdays."

Should Iran release Mohammadi after a decade, her children will be 20 years old. At that point they will have spent their adolescence without their mother. "I have spoken to my children about it, and they know the situation," Rahmani said. "But they still hope she will be released early."

One can see that the last several years have cost Rahmani a lot of energy; they have marked him. But, he said, giving up is not an option. "I don't want my children to grow up in the same world that I did - in a world in which a government treats its citizens like this."