Dhaka High Court orders probe into lawyer′s alleged murder | Asia| An in-depth look at news from across the continent | DW | 10.05.2019

Lawyer Palash Kumar Roy died after prison officials allegedly torched him in a jail in northwestern Bangladesh. As officials and the victim's family trade accusations, a Dhaka court has ordered a probe into the incident. 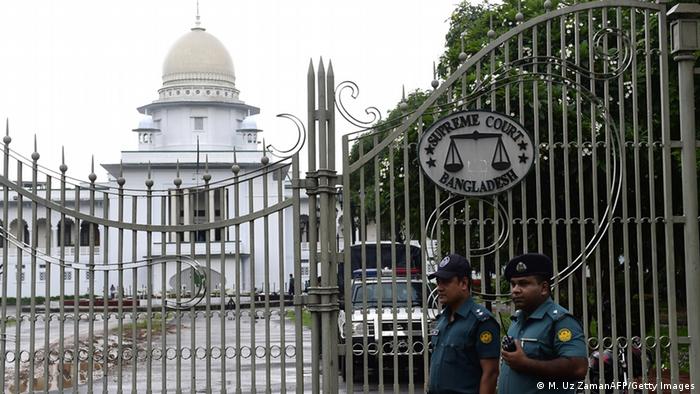 On April 26, suspects torched Palash Kumar Roy in a prison in Panchagarh district in northwestern Bangladesh. The lawyer, referred to as "Palash” by the local media, died four days later while undergoing treatment at Dhaka Medical College Hospital's burn unit.

Previously, in a recorded conversation obtained by DW, the 37-year-old said that he had joined the Kohinoor Chemical Company as a legal officer in 2013. However, he was asked to do various illegal and immoral activities, including possession of government land, but he refused. In 2016, he resigned from the job, after which a false case was filed against him for allegedly embezzling 3.1 million taka ($11,381).

On March 25, Palash and his family began a hunger strike in front of the office of Panchagarh's deputy commissioner and followed it up with a human chain on the highway. Palash was giving a speech when he was arrested by the police, who accused him of insulting Prime Minister Sheikh Hasina in his statements. A case was filed against him and he was sent to the district jail.

He was threatened several times during his prison term, but his complaints were unheard and officials did not take any action. "On April 25, around 10 in the morning, two people came to me and threw something from a bottle of Tiger [a local energy drink] and set my body on fire,” Palash said in his audio statement.

Prasenjit Kumar, the lawyer's nephew, recorded the audio just before Palash died. "Palash was suffering from breathing difficulties. We did not think he would die. He asked me, does your mobile have a recording option? I want to talk about something. Then I recorded his words on my mobile phone. He died after half an hour," he told DW.

By holding a free and fair election, Bangladesh could have shown to the world that it's managed to transform itself into a functional democracy. But the country wasted the opportunity, writes DW's Zahidul Haque. (31.12.2018)

Voting has ended in Bangladesh's general election, which was hit by violence, voting irregularities and rigging allegations. PM Sheikh Hasina is widely expected to win a historic but controversial fourth term. (30.12.2018)

Speaking to DW, Palash's mother Mira Rani Roy said, "On April 26, when I went to meet him [Palash] in prison, I came to know that he had been set on fire. Though, they [the jail authorities] concealed it from me. I went to the Panchagarh Sadar Hospital but they didn't allow me to meet my son.” Roy added that her lawyer son had been sent to the local Rangpur Medical College Hospital's burn unit and then to a hospital in the capital. "His treatment was neglected even after I repeatedly said that 40 percent of his body had been burnt.”

Mira Rani Roy alleged that the prison authorities did not administer first aid and also neglected his treatment. "My son showed me his two fingers repeatedly. ‘Two people, two people.' he tried to say to me," she said, indicating that her son may have had some idea about his attackers. "While in jail, some people met my son and threatened him. Besides, the Kohinoor Chemical Company sent people to collect information about my son. My son has been burnt to death in a planned manner," she told DW.

However, Mushfiqur Rahman, who heads the prison in Panchagarh, denied the allegations. He said, "Palash set fire to his own body with a lighter in the jail's bathroom. Our staff extinguished the fire and he was sent to the prison hospital.”

When asked how he came to know of this and if anyone had seen Palash lighting up his own body, Rahman said he had heard about it and was saying so according to his impression of the event. He also claimed, "We have not been late to treat Palash. But we have to maintain everything in accordance with the jail jurisdiction. We sent him to Dhaka Medical College just shortly after that day."

The Kohinoor Chemical Company, Palash's former employer, did not react to any queries from DW about allegations against its officials.

No case for murder -yet

Until now, no official case has been filed and no suspects named in Palash's death. Panchagarh Sadar Police Station chief Abu Akkas Ahmed said, "In my police station, there is a case against him for insulting the prime minister. No one has been sued over his death, and he died in Dhaka. So if there is a case, it will be there [in Dhaka]."

Palash Kumar Roy's mother seems helpless: "We have not sued yet. I cannot understand what to do now and how."

Meanwhile, Dhaka's High Court has ordered a judicial investigation into the incident following a writ petition by lawyer Sayedul Islam Sumon: "He [Palash] was burnt in jail and died. The prison authorities have to take this responsibility. And in the statement before he died, Palash said that two people torched kerosene on him and set him on fire. We're calling it a murder."

The court has now ordered a probe into Palash's death. According to Bdnews24.com, the local content partner of Deutsche Welle, "the order calls for a judicial inquiry into the incident by a magistrate under the supervision of Panchagarh's chief judicial magistrate. They are required to submit a report within 30 days of receiving the order.”

Judges have justified their decision saying a jail should typically be among the most secure places around. The probe will look into how it was possible to get kerosene or petrol inside the prison and use it to set fire to a person.