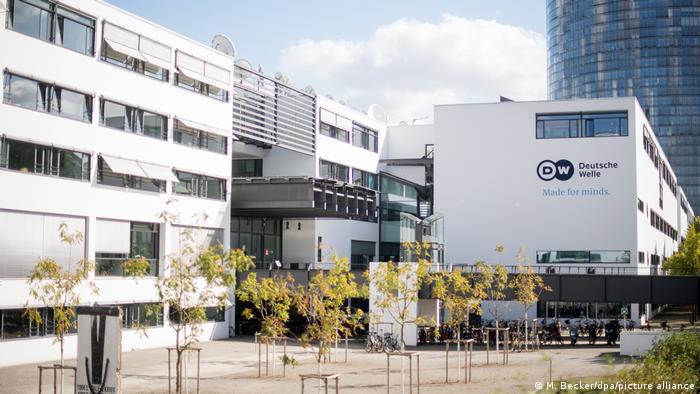 German media outlet Deutsche Welle is based in Bonn and Berlin

The website of Germany's public international broadcaster Deutsche Welle (DW) has been blocked in Belarus.

Belarus' Information Ministry announced on its website that access to several news portals, including DW, had been restricted.

Authorities have tried to justify their decision by saying that these media outlets are spreading "extremist" content.

DW Director-General Peter Limbourg condemned the government's move, saying that it is an act of desperation.

"The accusations against DW are absolutely ridiculous. Mr. Lukashenko has shown that he will stop at nothing to maintain his hold on power in his struggle against his own people," Limbourg said, referring to Belarusian President Alexander Lukashenko.

"The heavy use of independent news outlets clearly shows that people in Belarus no longer trust the government-controlled media," he stressed, adding: "We protest against the suspension of our offering because the people there have a right to objective information on the situation in their country."

On Thursday, users first called attention on social media to the fact that DW news pages were no longer accessible via numerous providers. Since then, the government has apparently rolled out the suspension across the entire country. Mobile use is also being limited.

Websites of a number of other media outlets in Belarus — including weekly, independent newspaper Novy Chas (New Time) — have also been blocked.

In addition, Current Time TV's webpage has been restricted. The broadcaster, which was created by the media corporation Radio Free Europe/Radio Liberty, is a Russian-language television channel with its editorial office based in Prague.

The truth will still find its way

Belarusian opposition leader and former presidential candidate Sviatlana Tsikhanouskaya called censoring independent media an "act of revenge for the truth" and added that organizations censored in Belarus could see the move as a confirmation of their work.

"Those responsible for blockings don’t understand that the truth will still find its way," she said, expressing gratitude for DW's reporting. "Don't stop. Don't let blockings scare you."

Independent media 'more important than ever'

Christopher Resch, spokesperson for Reporters Without Borders, said that "it's another arbitrary act on the part of the Lukashenko regime."

"The regime is stepping up its crackdown on the digital sphere, repeating the accusation that these media outlets are spreading extremist content," he noted, adding: This opens the door to arbitrariness as it's not clearly defined what extremist content is."

"This is a German media outlet, and the German government must get more involved and increase the pressure on the regime," he added.

DW has expanded its reporting on Belarus since the spring of 2021 to cover the activities of civil society in the country.

Germany's State Minister of Culture Monika Grütters called the decision to limit freedom of the press a "sign of weakness."

"The fear, even on the part of those in power in Belarus, of Deutsche Welle's reporting, of the freedom of art and the independence of the media, in reality, is a sign of weakness," Grütters said in a statement. "People living in Belarus are increasingly deprived of their participation in world affairs and the opportunity to form their own decisions. In view of the increasing restrictions on freedom of opinion and freedom of the press in various authoritarian regimes, Deutsche Welle, as the voice of independent quality journalism, is now more important than ever in many places."

DW has been working to provide solutions to circumvent censorship and provide information to the people in many countries worldwide.

For instance, people in countries whose governments block or restrict access to independent news can access DW content securely and anonymously with the Tor Project. Websites accessible through Tor (The Onion Routing) can be recognized by the extension '.onion.'

A special browser such as the Firefox-based Tor browser is necessary in order to gain access to the websites.

DW has also been working with Psiphon, a commercial provider in Canada, to create censorship-bypass tools for the needs of free media.

With this technology, users in countries like China and Iran have been given the power to access unbiased information from reliable sources.

The foundations for independent journalism

Our mission: to convey the country as a nation rooted in European culture and as a liberal, democratic state based on the rule of law, as well as to promote exchange between the world's cultures and peoples.

Deutsche Welle and Cologne University’s Institute for Media and Communications Law continued their series of events.