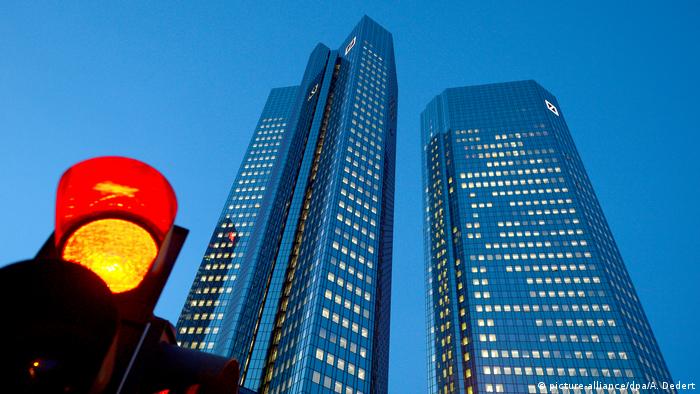 Shares in major banks took a beating on Monday after the FinCEN leak revealed several institutions may have handled more than $2 trillion (€1.7 trillion) worth of dirty money between 1999 and 2017.

Deutsche Bank, Germany's largest bank in terms of assets, saw its shares fall by 8.8%, according to the Xetra trading system. On the Frankfurt and New York exchanges, the bank's shares fell by 8.4% and 8.2% respectively.

The bank appeared prominently throughout the investigation and has beenunder intense scrutiny for several years.

The bank agreed to pay the US state of New York $150 million to settle claims that it broke compliance rules in dealing with alleged sex offender Jeffrey Epstein. Epstein died in a Manhattan jail in August 2019 while awaiting trial on sex trafficking charges.

The bank's Frankfurt headquarters were raided on suspicion of helping clients set up offshore companies that were used to launder hundreds of millions of euros in 2018. The raid came from the release of the Panama Papers.

The FinCEN papers, which included more than 2,000 suspicious activity reports (SARs), were released following an investigation b Buzzfeed News and the International Consortium of Investigative Journalists (ICIJ). While some banks said the transactions happened long ago, the reports revealed massive problems with the monitoring system of policing money laundering and other criminal activities.

"It confirms what we already knew: that there are huge amounts of SARs being filed with relatively low numbers of cases brought through to prosecution," said Etelka Bogardi, a Hong Kong-based financial services partner at Norton Rose Fulbright.

Germany's Commerzbank was also mentioned in the report. It's shares fell by 5.4% on the day according to Xetra.

British banks HSBC and Standard Chartered saw their shares fall to their lowest level in as much as 25 years after the release of FinCEN.

The UK government said it would work on reforms to its corporate registry system and require more checks on company directors.

"If the government cares at all about the UK's reputation globally, it must stop rolling out the red carpet to the criminal and corrupt, and refuse to legitimize their money through our companies and banks," said international NGO Global Witness.

American banks JPMorgan and Bank of New York Mellon also watched their shares tumble on Monday. They fell by more than 4% by mid-day trading in New York.

Bank of New York Mellon said it has complied with "all applicable laws and regulations." JPMorgan said it has "thousands of people and hundreds of millions of dollars dedicated to this important work."

Compliance experts said part of the problem that lead to the FinCEN document release was banks were struggling to distinguish between transactions that were and were not suspicious. The were filing so many SARs that enforcement agencies could not keep up.

"Lots of banks are struggling with high false positive rates and the backlog (of existing cases). That's why you see that sometimes SARs were raised over 100 days after the transaction," said Cliff Lam, a director at AlixPartners in Hong Kong.