Definitely not an arms fair — ITEC comes to Stuttgart | Germany| News and in-depth reporting from Berlin and beyond | DW | 16.05.2018

Definitely not an arms fair — ITEC comes to Stuttgart

The ITEC trade fair has brought some of the world's biggest military tech companies to the German city of Stuttgart. Some locals are not happy that their conference hall has been given over to war simulators. 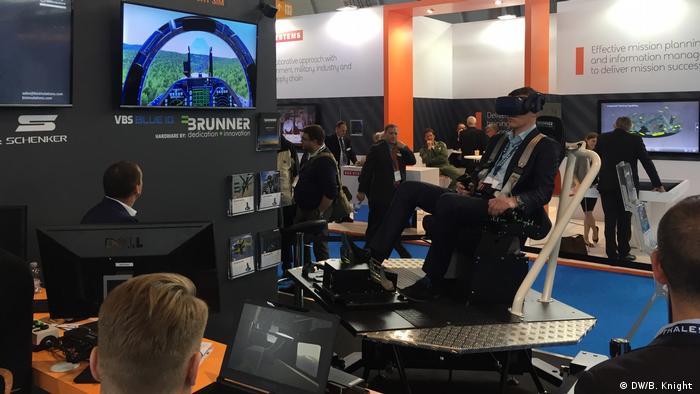 The ITEC fair, which descended on the southern German city of Stuttgart this week, is officially called the International Forum for the Military Simulation, Training and Education Community. And it's significant that the "M" has been left out of the acronym.

Everyone involved is keen to emphasize that this is not a military show. "At its heart this is a technical conference, and it brings together technical experts in the military field but also in the civil security field," said Rear Admiral Simon Williams, Royal Navy officer and chairman of the UK events organizer Clarion, which organizes the annual show in a different city every year.

But, walking around the giant hall next to Stuttgart Airport, it's hard not to feel the military stamp everywhere — many of the attendees are in uniform, and many of the exhibits they're looking at involve high-definition simulations of military combat, usually on huge curved "immersive" screens. There are tank battle simulations — with software that can be customized to whichever tank your army happens to use — as well as airplane dogfight simulations, infantry ground troop simulation, and coordinated air force and infantry operations that involve laser guiding hardware and game-console type handsets.

There's even — courtesy of one French startup with an eager young CEO — a walk-on virtual reality simulator, which includes a small bowl you can run in and a converted assault rifle. This, the brochure says, is designed for "apex soldiers and police officers" to simulate countering a Paris 2015-style terrorist attack.

It all feels very much aimed at the military market, though Williams insists, "These are just demonstrations of the technologies — how do you attract people to stop and ask a question? And how do you display the highest definition of what you can do? It's by rolling a fast-moving situation that will show the technical demands of a particular system."

Not an arms fair

That sounds like obfuscation to the myriad of peace organizations gathered outside. Thomas Haschke, of the German peace group DFG, is holding a 56-hour vigil for the duration of the event — sleeping in his car between shifts of standing in a tent surrounded by flyers, fake corpses with red paint on them and a giant inflatable of his organization's logo — two hands breaking a rifle in half. 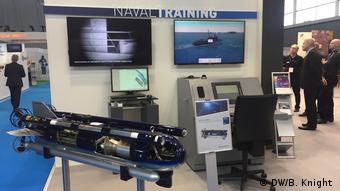 The latest in military technology was on display in Stuttgart

"They're trying to make war training more affordable and more effective, so that you can kill better and quicker, and we're protesting against that," Haschke told DW.

He had a particular problem with the ITEC's "Platinum Sponsor" — the huge German defense corporation Rheinmetall. "For us in the peace movement, Rheinmetall has very, very negative associations," Haschke says. "Their big successful product is the Leopard 2 tank, which is involved in wars that violate international law, such as currently in Syria."

The Turkish government, under President Recep Tayyip Erdogan's increasingly repressive regime, admitted in January that it had used Leopard 2 tanks bought from Germany in its offensive against Kurdish fighters in the Syrian border region of Afrin.

Williams' response to the demonstrators was brief: "We respect people's right to protest — people have a view, of whatever activity, and we have no issue with that," he said.

Haschke, for his part, scored it as a victory that the ITEC had refrained from putting a big banner up outside the hall: "They've shut themselves in — we're open out in the street," he said. 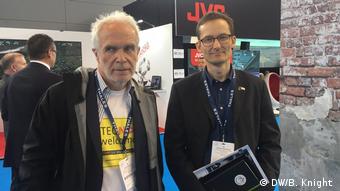 Russmann and Katzenstein were given a guided tour of the ITEC

But, as Williams pointed out, the ITEC does allow journalists into the fair — and the occasional hostile politician. Hermino Katzenstein, local state parliamentarian for the Green party, was given a special tour of the ITEC — supervised by two PR people and accompanied by a veteran German peace activist named Paul Russmann.

"At first, it all looks very harmless, because there are a lot of computer firms here," Russmann, wearing a t-shirt that read "ITEC NOT WELCOME," said after their guided tour. "But I noticed that in the simulations, Rheinmetall for example had built a village, with urban fighting. And if you know that Rheinmetall is trying hard to get into the Middle Eastern market, you do ask yourself whether it is trying to suggest that with its technology you can fight domestic insurgencies better."

Russmann also accused the Baden-Württemberg government — under the Green party's State Premier Winfried Kretschmann — of playing down the conference. "They said: oh, it's for police and fire service technology — but what we're seeing here is almost exclusively military."

"The representative from Clarion kept emphasizing that the exhibitors were producing simulation software — that this isn't about weapons, and that deals aren't actually being struck here," Katzenstein added. "But what I noticed straight away was the military aesthetic of the stands — you see fighter planes flying around everywhere, you see tanks, you see weapons displayed, or at least prop weapons. Of course, it's all about the economy, and jobs, etc — but do we, as the state of Baden-Württemberg, as the city of Stuttgart, really have to provide a forum for that industry here?"