At least 10 people have been killed in a car bombing in Syria's coastal city of Jableh. The city is considered to be a bastion of Syrian President Bashar al-Assad's regime. 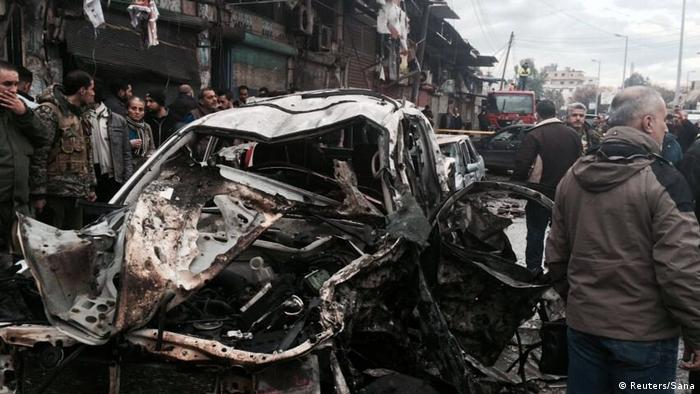 The Britain-based Syrian Observatory for Human Rights put the death toll at 15, saying the blast hit close to a stadium. There was no immediate claim of responsibility.

Hospital officials put the number of wounded at around 30, and several people were said to be in a critical condition.

State media showed footage of scores of cars either overturned or set on fire by the explosion. Nearby shops suffered extensive damage.

Initial investigations suggested a car parked in the area was remotely detonated, the head of the local police force told state media.

The bomb detonated during rush hour when government employees, shoppers and students were crowding into one of the town's main streets. Jableh is located in the coastal Mediterranean province of Latakia. The area is mainly inhabited by members of the Alawite sect to whom Syrian President Bashar al-Assad belongs.

The province hosts Moscow's naval base in Tartous port while a nearby airbase is Russia's main launching ground for an intensive bombing campaign targeting rebel-held territory.

Tartous was targeted by the "Islamic State" (IS) armed group last May when several suicide blasts killed 150 people and wounded 200 others. The jihadist group said at the time its fighters had targeted "gatherings of Alawites," who they consider heretics.

But government-held coastal cities like Tartous and Jableh have been largely spared the wide-scale violence seen elsewhere in the war-ravaged country.

Thursday's attack comes amid ongoing violations of a nationwide ceasefire that went into effect in Syria a week ago.

The truce, brokered by Russia and Turkey, is expected to bring together the Syrian regime and several opposition groups to more lengthy peace talks later this month to end the nearly six-year conflict.

IS and the al-Qaeda-linked Fatah al-Sham Front are not part of the broad truce that the Syrian government and the opposition agreed on last week.

Ankara has said Syrian military airstrikes on rebel-held areas in Wadi Barada could jeopardize planned peace talks in Kazakhstan. Damascus has accused the rebels of deliberately cutting off the capital's water supply. (05.01.2017)

The UN has approved a Russia-drafted resolution supporting a shaky but functioning ceasefire in Syria. The measure calls for immediate and speedy access for humanitarian workers to the country's hardest-hit areas. (31.12.2016)

Multiple explosions have rocked the Syrian coastal cities of Jableh and Tartus, killing dozens and wounding over a hundred. The terrorist group "Islamic State" has claimed responsibility for the attacks. (23.05.2016)