Multiple explosions have rocked the Syrian coastal cities of Jableh and Tartus, killing dozens and wounding over a hundred. The terrorist group "Islamic State" has claimed responsibility for the attacks. 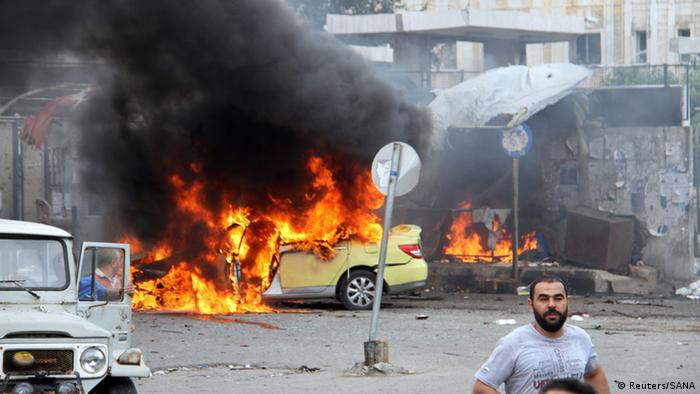 Over 100 people were killed in a spate of bombings in pro-Syrian regime cities along the Mediterranean coast on Monday, reported monitors from the Syrian Observatory for Human Rights.

Fifty-three people were killed in the city of Jableh and another 48 died further south in Tartus, according to the monitoring group. Over a hundred are reportedly injured.

Syrian state media confirmed the attacks, but placed the death toll lower, at around 78.

Shortly after the blasts, the militant "Islamic State" (IS) group claimed the attacks, according to a news agency linked to the group.

Monitors said a total of seven explosions hit the region - with four in Jableh and three in Tartus. State media reported that two suicide bombers and a car bomb hit a gas station in Tartus.

One of the blasts targeted a government hospital in Jableh, as well as a bus station.

The cities targeted were known as Assad strongholds, whose family comes from the village of Qardaha, just 25 kilometers (15 miles) east of Jableh. The area also hosts a Russian air base, which intervened last September in support of Assad.

Jableh and Tartus have been relatively insulated from the devastating war raging in Syria, which has killed at least 270,000 people since March 2011.