A deadly fire spread through Russia's Admiral Kuznetsov while the aircraft carrier was docked for maintenance work in the Arctic port of Murmansk. Responders battled the blaze for many hours. 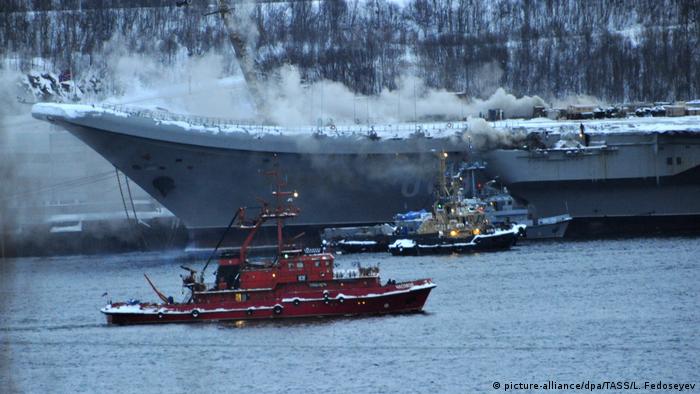 At least two Russian navy officers were killed after a fire broke out at Admiral Kuznetsov, Russia's sole aircraft carrier, on Thursday morning. At least 11 more people were injured.

The blaze reportedly started while workers were conducting welding operations in the vessel's engine room, while the ship was docked in Murmansk. It was only extinguished a day later.

One of the servicemen lost his life after heading towards the area to "ensure the safe evacuation of workers," Russia's Northern Fleet said in a statement.

Images from the scene showed thick smoke billowing from the vessel. Russia's federal investigators were looking into the incident.

According to Russia's Kommersant paper, the fire started when melted metal fell down a shaft and landed on an oily cloth. The fire then reportedly spread to the electric cables.

The Admiral Kuznetsov has faced multiple malfunctions and technical issues since its launch in 1985. The non-nuclear vessel is currently undergoing a pricey renovation and maintenance program and is not due to return to active service before 2021. Russian authorities said that the repairs, reportedly set to cost up to $1 billion (€880 million), would modernize its power plant and electronic systems. 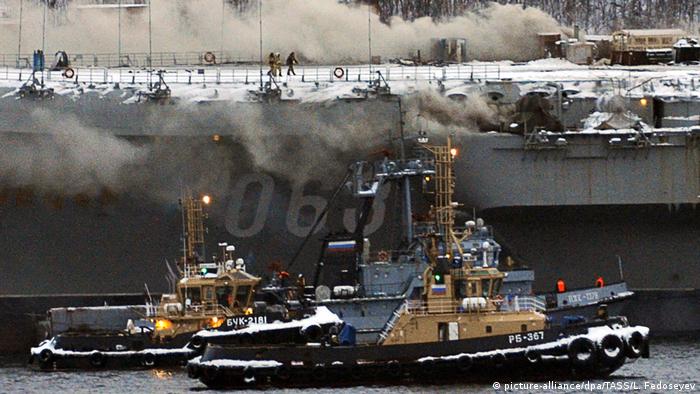 The ship was evacuated after the fire

Moscow deployed the ship to the eastern Mediterranean in 2016 to boost Russia's military campaign in Syria. Two of Admiral Kuznetsov's fighter jets were lost while trying to land on the carrier. While returning to Russian waters, the ship was photographed belching black smoke due to an apparent malfunction.

In 2018, the  Russian navy's enormous floating dock sunk during repairs and a 70-ton crane crashed onto the deck Admiral Kuznetsov, leaving a hole of 20 square meters (215 square feet).

All other Soviet-era aircraft carriers have since been decommissioned.

Beijing has launched major military exercises encircling the island in a show of force after US House Speaker Nancy Pelosi's visit. Taiwan has decried the "illegitimate, irresponsible" drills.