Moscow has accused London of staging a "show" by escorting a Russian aircraft carrier through the English Channel and criticizing Russia. Earlier, the UK defense secretary called the Admiral Kuznetsov a "ship of shame." 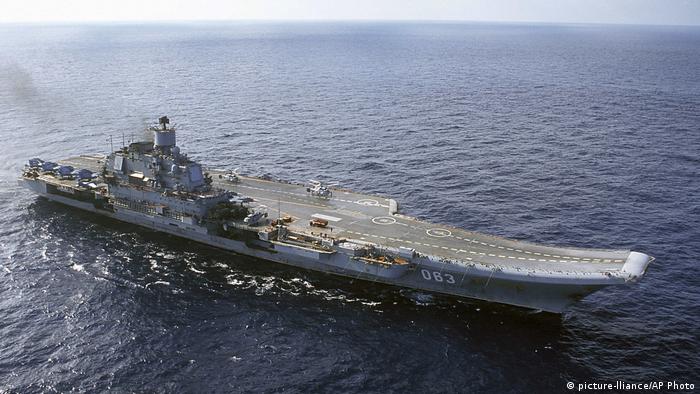 Russian warships "had no need" for a British military escort, as they know "how to hold course and navigate" on their own, Moscow's defense ministry spokesman Igor Konashenkov said on Thursday.

The UK had deployed a Royal Navy frigate and Typhoon jets to monitor a convoy of Russian vessels passing through the English Channel. The convoy, led by  the aircraft carrier Admiral Kuznetsov, is on its way back home from their mission in Syria.

"We will keep a close eye on the Admiral Kuznetsov as it skulks back to Russia," Defense Minister Michael Fallon said in a statement on Wednesday. Fallon also described the aircraft carrier as a "ship of shame whose mission has only extended the suffering of the Syrian people."

"We are man-marking these vessels every step of the way around the UK as part our steadfast commitment to keep Britain safe," he added.

In response, Russia's Konashenkov described the move as a "show" aimed to "distract the attention of British tax payers from the real state of the British Navy."

"We would also recommend Mr. Fallon to pay more attention to the British fleet, especially because there are reasons to do so, as reported by the English press," he added. The jab was aimed at Sunday reports of a failed missile test which apparently sent a British nuclear-capable missile towards the US. The missile, part of Britain's Trident nuclear deterrent program, was unarmed.

Unlike Russia, the British Navy currently has no aircraft carrier in service. The Soviet-made Admiral Kuznetsov, however, has long been plagued by performance issues and breakdowns.

Specifically, he commented on earlier media reports that Kuznetsov was releasing heavy smoke on its journey towards Syria.

"Okay, so Kuznetsov was smoking, but it completed its combat mission, did it not?" he said.

The vessel entered service in 1991, and is currently Russia's only remaining aircraft carrier. Moscow lost its ability to produce equivalent ships in the breakup of the Soviet Union, with its Black Sea Shipyard remaining under Ukraine's control. Russian officials believe they would be able to start building a new aircraft carrier in 2019. Even so, the new ship would take several years to complete.