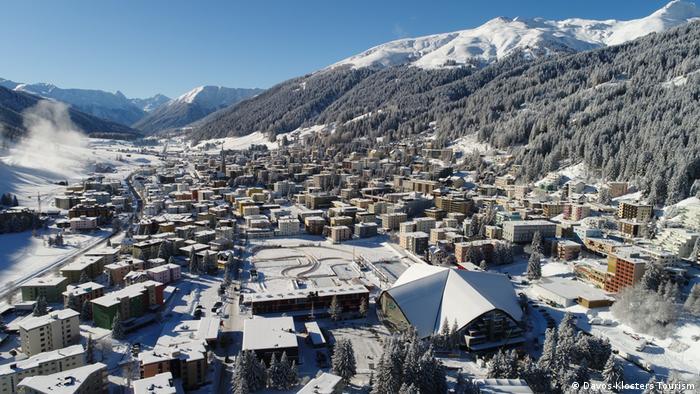 Davos – best-known for hosting global elites – owes a lot of its fame to a German doctor.

It was Alexander Spengler who first brought this then tiny farming village in the spotlight in the 1860s. Spengler noticed that the village's climate somehow made its people immune to tuberculosis, a deadly disease that was wreaking havoc across Europe.

As the word spread, Davos began attracting patients from across Europe. A number of hospitals sprung up, many of them catering to rich foreigners, who doled out large amounts of cash to lounge in their wide sun-kissed balconies.

It marked the beginning of Davos' tryst with the rich and famous. The first ones being Sherlock Holmes creator Arthur Conan Doyle, who stayed in Davos while his wife was treated for TB, novelist Robert Louis Stevenson and German writer Thomas Mann, who too came for his wife's treatment.

Today, Davos no longer attracts TB patients and many of its sanatoriums have been converted into luxury hotels such as Hotel Schatzalp, which is thought to have been the sanatorium Mann described in his novel "The Magic Mountain."

But patients have not deserted the Alpine resort altogether, it's just that their illnesses have taken a modern form. Davos and some nearby towns are seeing an increase in patients suffering from burnout and depression.

"The specialty of Davos is the mountains, it's the touch of nature that you can experience here," Michael Pfaff, the chief psychiatrist at Clinica Holistica Engiadina, told DW. "The possibility to get in close contact with nature really helps people get their inner balance back."

Davos tourism authorities are collaborating with local hospitals to come up with tailor-made offerings to promote the region's medical prowess. They plan to organize a special rehabilitation camp this summer in nearby Klosters for people suffering from burnout.

The participants would be encouraged to spend some time on a nearby farm, take part in light sports and trek up mountains, Samuel Rosenast, a spokesman for the Davos tourism department, told DW.

"There are many people who work a lot and get burned out. They look for a place to undergo rehab — a place where there is good air and no stress," he said.

Pfaff's clinic, not very far from Davos, is the only hospital in Switzerland specializing in treating chronic stress patients. The 55-bed clinic brims with patients throughout the year; it is already fully booked for the next eight weeks.

Patients come here from as far as Germany with complaints of body pain, depression, anxiety and other psychosomatic disorders, many of them middle-level managers, who Pfaff says are inundated with tasks in their offices.

"When this clinic was founded 10 years ago, we thought it would be a place for top managers and that that they would need nice wellness facilities and a may be a glass of red wine in the evening," said Pfaff. "But as it turned out, we didn't really get the top managers but people from higher or middle management. They seem to have the most pressure."

The biggest culprits in Pfaff's view are the financial and insurance companies, who continue to pressure their employees to work long hours and in stressful conditions by luring them with hefty paychecks. Many of his patients come from Zurich — the financial capital of Switzerland.

The World Health Organization (WHO), which classifies burnout as a disease, has estimates that nearly every fifth child or teenager and every fourth adult will be affected by burnout in their lifetime.

In Germany, the number of sick leaves related to mental illnesses has tripled since 1997.  In Switzerland, it has increased by more than 50% in the past 7 years. A Gallup poll showed 25% of employees feel burned out at work very often or always. The problem is worse among millennials. A study in the US showed 84% of millennials have experienced burnout at work. Experts say women are more likely to be afflicted with the illness than men.

A 2018 study estimated that mental illnesses will cost the global economy $16 trillion (€14.4 trillion) by 2030. Despite a rise in burnout and depression cases, experts say companies are not doing enough to tackle the problem.

It's for this very reason that mental health is a major talking point at this year's World Economic Forum with several sessions dedicated to the topic.

"I am certainly not advocating companies, organizations, managers to turn into therapists but what we need to do better societally is to understand that the system that's in place does have an impact on employees' mental health," Peter Varnum of the WEF told DW. "We as employers should be promoting our employees mental health because the research shows that leads to more productive and efficient employees but it's also the right thing to do."

A new study shows that people often misinterpret symptoms of depression in older people as the natural realities of aging. The findings could help more older Germans get the treatment they need. (27.11.2019)