The Global Shapers are a network of more than 6,000 young people working to address local, regional and global challenges. Around 50 of them get invited to the World Economic Forum each year. DW spoke to some of them. 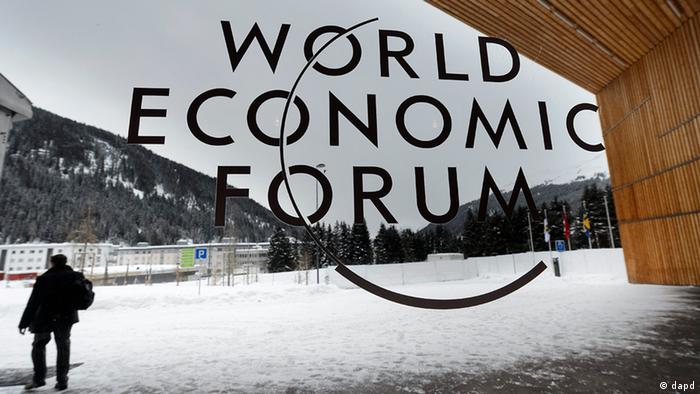 "Why are you still in Venezuela? That's the question we ask ourselves every time we meet in Caracas," says Gabriela Saade. The 26-year old works for a political think tank in Venezuela's capital, one associated with a political party that is critical of the current government.

She has little free time because she spends her weekends visiting schools and the poorest neighborhoods of Caracas as a volunteer.

The trained economist organizes sanitary products for women as well as food and medicine for those in need. She also advises teachers and students how classes could be improved — services that the ailing Venezuelan state has long stopped providing.

Gabriela's two sisters have already moved to the United States, many of her friends and colleagues have, too. Those who can leave the country, but Gabriela wants to stay and make a difference locally. 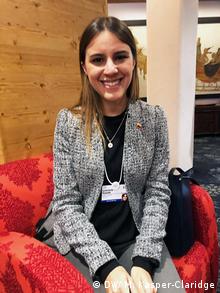 Gabriela Saade at the World Economic Forum in Davos

Together with others, she is active as a so-called "Global Shaper" in Caracas. The Global Shapers are a global network of young people that was founded by the Geneva-based World Economic Forum (WEF).

They exchange ideas, organize meetings and try to make a difference where they live by establishing social and cultural projects. The WEF supports them with contacts to experts and other organizations.

The Global Shapers network already has more than 6,000 devoted young members in 156 countries and regions.

Side by side with Ecuador's foreign minister

This year, Gabriela Saade was also chosen to attend the World Economic Forum in Davos. She had submitted a video message to apply and is visibly proud that she was selected. Together with about 50 other Global Shapers she now wants to give young people a voice at this gathering, where older politicians and corporate leaders tend to dominate.

Among other things, the young economist from Venezuela will be on an official panel on the future of Venezuela at the World Economic Forum, alongside the foreign minister of Ecuador.

Outside, it's minus 12 degrees Celsius and Gabriela Saade is contemplating how she can make a difference to her home country during the few days she has available here in Davos.

"We need to map paths to stability in Venezuela", she stresses, "and raise awareness about what is going on."

More than the establishment

This year, 3,000 people from around the world are attending the World Economic Forum. The issues that the young want to discuss often differ considerably from the usual WEF agenda. Baillie Aaron cares about prisoners. She is a Global Shaper from London and has founded "Spark Inside," an organization that coaches prisoners.

"Many prisoners have no sense of purpose, but coaching can help them to understand that there is a life after crime," she says and proudly points to her achievements.

"Spark Inside has coached over 1,000 prisoners and prison staff in London and South East England — this helped to reduce violence and reoffending."

The Canadian woman isn't shy and wants to solicit support for her project in Davos. Representatives of billion-dollar hedge funds attend the event in the Swiss mountains and she wants to approach them directly, and of course, join the countless discussions about the state of the world.

"There are only 50 of us here in Davos, but with our energy, we can overpower the other 3,000 participants," jokes Jaideep Bansal. The 28-year old from northern India exudes incredible energy. He is confident that the opinions of the young will be heard at the WEF.

"The decisions they take will affect us," he says and stresses: "Take the youth seriously."

Bansal himself proves how serious the young are about changing the world themselves. His project "Energy Access, GHE" has brought solar power-based electricity to 80 villages in remote regions in India. For this project, he abandoned his secure and well-paid job at the multinational consumer goods company Proctor and Gamble.

For Bansal and the other young participants in Davos, it's about the lasting impact of their work on society.

"We want to make a change," says the young man. And off he is to his next meeting at the WEF, trudging through the thick snow of Davos with his bright red turban.