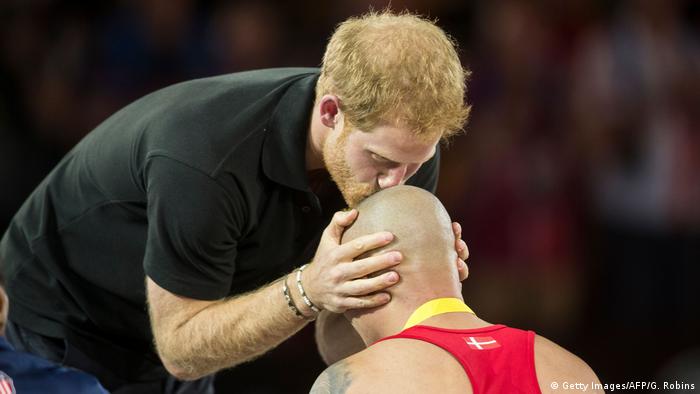 It's a memorable image; Prince Harry kissing Maurice Manuel on the head. The Danish wheelchair rugby player and his team had just won gold at the Invictus Games in Toronto. This image from 2017 is just one of many of Prince Harry from the Games, and this is no coincidence. After all, it was the 35-year-old Duke of Sussex who in 2014 created the Invictus Games for wounded and traumatized soldiers.

"The secret to the success of these Games has been accepting that mental health is the real key to recovery," the prince said. "Our competitors have helped turn the issue of mental health from a sad story to an inspiring one. They want to live, rather than just be alive."

Now, sports fans in Germany will have the opportunity to observe this at firsthand after it was confirmed that the 2022 edition of the games will take place in the western city of Düsseldorf. The local Rheinische Post newspaper had already reported the news ahead of the official announcement.

As a British Army officer, Prince Harry was himself stationed in southern Afghanistan from December 2007 to February 2008, where he took part in front-line operations before being pulled out over security concerns. His experiences in Afghanistan made a big impression upon the prince and, since then, the youngest son of Prince Charles has been committed to helping war veterans and those disabled through wounds sustained in combat.

In 2013 he officially opened the US Warrior Games, which are organized annually by the US Department of Defense for wounded or ill veterans.

This experience inspired Prince Harry to create a similar but wider international event and, in September 2014, the inaugural Invictus Games, involving 400 athletes from 13 countries, were held at the site of the 2012 Olympics in London. Twenty-five thousand spectators turned up for an impressive closing ceremony, which featured performances by international rock stars the Foo Fighters and Bryan Adams.

This was followed by Invictus Games in Orlando in 2016, Toronto in 2017 and Sydney, one year later. The fifth edition of the Games is scheduled for May of this year in The Hague in the Netherlands, before the sixth edition comes to Germany.

The number of nations taking part has risen steadily — with South Korea recently becoming the 20th country to announce that it would send athletes to the event. The 2020 Games will feature 10 sports, including athletics, cycling, indoor rowing, seated volleyball, wheelchair basketball and wheelchair rugby.

With Düsseldorf confirmed as the host of the 2022 games, German veteran Keven Falley will be particularly pleased. In an interview with DW, Kelley said that the Games play an important role in demonstrating "what even soldiers wounded in the line of duty are still capable of."

In 2013, the non-commissioned officer spent half a year as a transport driver with the Bundeswehr (Germany's armed forces) in Afghanistan, coming under live fire. These traumatic experiences would later haunt his dreams.

"I would wake up in a sweat in the middle of the night," he said. "At times I would catch myself screaming."

Falley competed in indoor rowing at the 2018 Invictus Games in Sydney. He says that holding the Games in Germany could help raise awareness here that wounded soldiers shouldn't simply be "discarded into a corner somewhere. They are part of society." 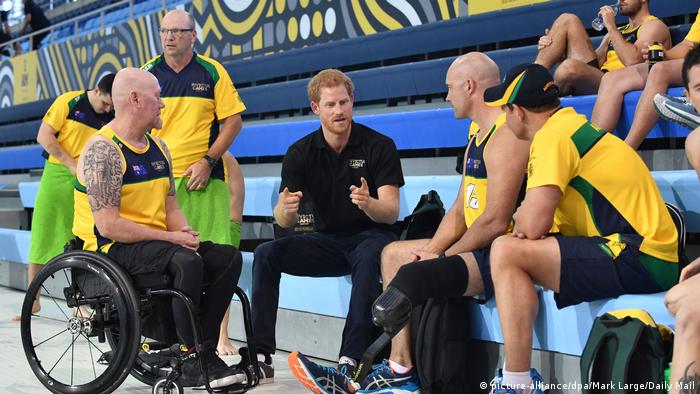 Düsseldorf's successful bid to host the 2022 Invictus Games has enjoyed broad support from Germany's parliament. A resolution passed by the Bundestag in November of last year stated that hosting the games would "send a clear signal of appreciation to German soldiers. At the same time, it would provide more recognition and acceptance for their service and the psychological and/or physical impairments they suffered as a result."

Prince Harry, who has been in the headlines in recent days over an announcement that he and his wife Meghan intend to partially step back from their official duties as members of the British royal family, remains the patron the Invictus Games. At past editions of the Games he was very much front and center, mixing in with the veteran athletes.

The Games remain his "baby" and it seems highly likely that he will also attend the Düsseldorf Games in 2022, adding a touch of glamour to the impressive sporting achievements that can be expected.