Hundreds of Czechs have taken part in a march to remember the deaths of 1,700 ethnic Germans 70 years ago. Some 20,000 Germans were expelled from the city of Brno at the end of World War II. 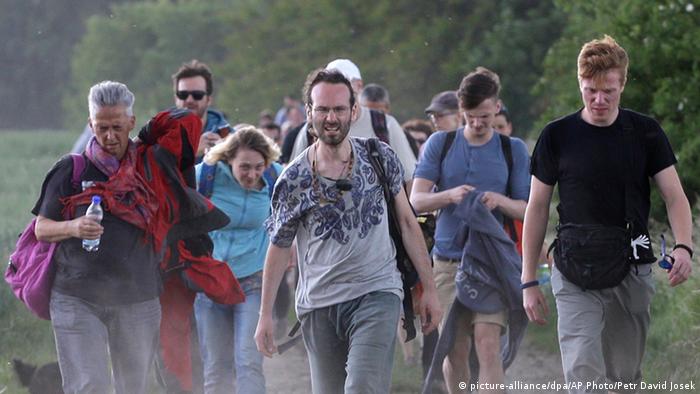 The commemorative 20-mile (32-kilometer) walk began on Saturday from the site of a mass grave in the town of Pohorelice and ended in Brno. Called the "Pilgrimage of Reconciliation," it is the first official event to remember the so called Brno Death March, which started on May 30, 1945.

In 1945, when Germany ended its occupation of then Czechoslovakia, Brno authorities forced over 20,000 ethnic Germans out of the country on foot to Austria, an act widely seen as an act of revenge to Nazi atrocities. Around 3 million ethnic Germans had lived in the country for centuries but were considered as enemies by Czechoslovakia after the war.

"According to witnesses, many were dying on the way of exhaustion, some succumbed to epidemics that spread in the Pohorelice camp, some were beaten to death or shot by the armed guards," Brno's government said in a declaration, which was approved earlier in May. For the first time, the city authorities officially expressed regret about the Germans' expulsion and deaths.

"It is good to talk about what happened to prevent it from happening in the future," said Matej Hollan, Brno's deputy mayor.

The city council has declared 2015 a year of reconciliation and said it planned to face up to its history. It expressed regrets to the survivors and the descendants of those died in 1945.

"It is a unique opportunity to show that Brno is not closing its eyes on its own history," said the city's mayor, Petr Vokral.

At the end of the Brno Death March reenactment, representatives from Brno and Austria will speak to march participants at Augustinian Abbey in Old Brno.

The city government's reconciliation efforts have received criticism from some quarters. A branch of an organization that fought the Nazis during World War II said the march paled in comparison to the injustices suffered under Nazi occupation.

"We see no reason to apologize to the Brno Germans who imposed such injustice and suffering on the Czech people," the group said in a statement.

Abbas decrees first Palestinian elections in over 15 years 7h ago