A surprise outcome in the first round of voting in Cyprus revived hopes that the island will be able to end three decades of division along ethnic lines. 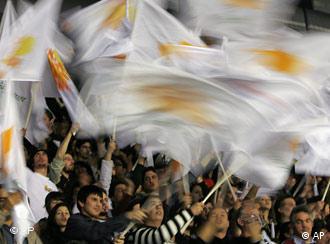 Current President Tassos Papadopoulos, a staunch opponent of dialogue with Turkish Cypriots, suffered a surprising defeat in the first round of presidential elections on Sunday, Feb. 17.

The two front-runners have vowed to change course and find a solution to the "Cyprus problem" which has kept the island divided for three decades.

Conservative Ioannis Kassoulidis and General Secretary of the Communist party Demetris Christofias will vie for the presidency in the final round of voting on Feb. 24. Both have pledged to resume peace talks, which were stalled after Papadopoulos urged the rejection of a United Nations peace plan in 2004. 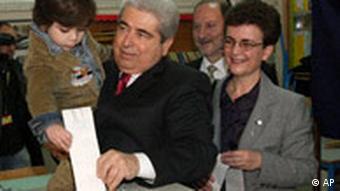 President Papadopoulos was expected to easily make it into the final round of voting, as he was ahead in opinion polls. During campaigning Papadopoulos said his political rivals would "sell out" the Republic of Cyprus if they won.

Kassoulidis, the country's former foreign minister, won 33.5 percent of the vote. Christofias, who is parliament speaker and left the government coalition led by Papadopoulos to run for president, won 33.3 percent of the vote. Less than 1,000 votes separated the two candidates.

Both candidates are appealing to the socialist party EDEK, center-right DIKO and the Greens to join their ticket in the general elections. In Cyprus, where voting is obligatory, the president has to clinch at least 50 percent plus one vote.

"In the end it will come down to party alliances and horse trading,“ Papageorgiou said. 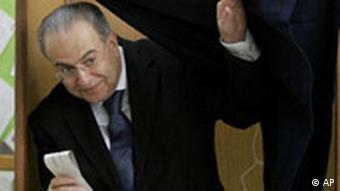 Ioannis Kasoulides wants an end to the "Cyprus problem"

"All those who believe that Cyprus should become a modern European state, now is the time to join together," Kasoulides, 59, said Sunday outside his campaign headquarters. "Now is the time to overcome all that has divided the people on the Cyprus problem these past years."

Cyprus, which gained independence from Britain in 1960, is one of the most popular Mediterranean tourist destinations.

Cyprus was split along ethnic lines in 1974 after Turkey responded to an effort to unite the island with Greece by invading the northern part of the country. Turkish Cypriots have a breakaway state in the north which is recognized only by Ankara. 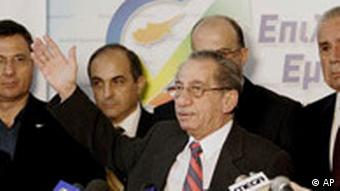 President Papadopoulos was ousted in the voting

“Our goal is to reunite the people of this tragic, afflicted country,” Christofias, 61, said.

Papadopoulos, 74, is seen as responsible for the failure of a UN blueprint in 2004 to unite the country before it entered the EU. After the plan failed, the southern Republic of Cyprus joined the EU in 2004. Turkey has repeatedly accused Greek Cypriots of trying to stop its own efforts to join the EU.

Turkish Prime Minister Recep Tayyib Erdogan said ahead of the vote that he remained hopeful of a Cyprus settlement.

On the first official visit by a Greek leader to Turkey in nearly half a century, the countries' prime ministers focused their talks on the long-standing issues of control of Cyprus and Turkish EU membership. (24.01.2008)

Do you think Cyprus should be reunited? Please include your name and country in your reply.