The South Pacific island nation has ended social distancing measures to get people to safety as a tropical cyclone made landfall. There are fears that a relief operation could introduce COVID-19 to the isolated nation. 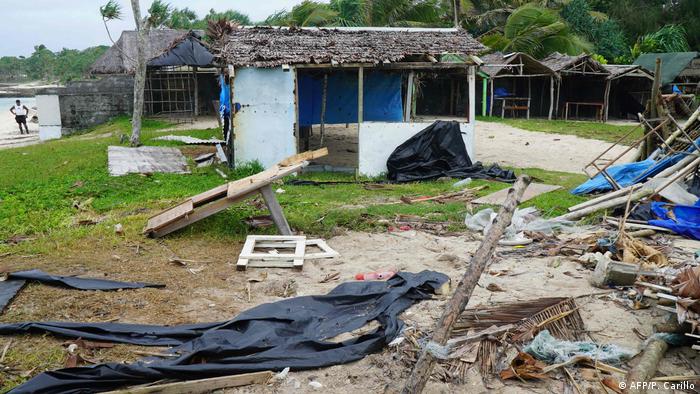 Tropical Cyclone Harold struck the South Pacific island of Vanuatu for a second day on Tuesday, destroying houses and downing telecommunications. The cyclone is expected to continue moving towards Fiji, where it is hoped it will make landfall with less intensity.

The powerful cyclone first hit Sana province on Monday, on an island north of Vanuatu's capital, Port Vila. Winds were as high as 235 km/h (146 mph) and communications were knocked out overnight.

Vanuatu's second largest city, Luganville, bore the brunt of the storm, with the roof of the council building ripped off and trees and other structures felled, according to pictures posted on social media. Luganville has a population of around 16,000.

The havoc wreaked by the storm may also spell disaster for Vanuatu's desire to remain one of the few nations in the world not yet to have a confirmed case ofCOVID-19. Social distancing measures were lifted to get people to shelters but international aid may be necessary to rehouse and feed those affected.

Vanuatuan authorities are yet to assess the full scale of the damage or report on casualties. Cyclone Harold is expected to reach Fiji around 06:00 local time on Wednesday.

Cyclone Harold has already killed at least 27 people in the nearby Solomon Islands.

ed/ng (AFP, Reuters)Every evening at 1830 UTC, DW's editors send out a selection of the day's hard news and quality feature journalism. Sign up to receive it directly here.

Vanuatu is the world's most at-risk country for natural hazards, according to a UN University WorldRiskIndex. And it's not just storms, earthquakes, volcanoes or tsunamis that are the problem. (17.03.2015)

Cyclone Idai struck southeast Africa in March 2019, killing at least 1,300 people in Zimbabwe, Mozambique and Malawi. A year later, DW visited desperate survivors in Zimbabwe, where many are still living in tents. (14.03.2020)

Floods and landslides triggered by the tropical storm battered the island country earlier in the week, with rescue efforts ongoing. Dozens remain missing.