A 160-kilometer journey along the Berlin Wall with elderly passengers celebrates German unity and mobility at any age. October in Berlin isn't the best time for a leisurely bike ride. The cold, often rainy weather is enough to sour the mood of even the most experienced bikers.

But Frank "Fun" Wissenbach, 62, a self-proclaimed "good mood ambassador," pays no mind to the weather today. Even as it downpours, he's laser-focused on providing his two elderly passengers an exhilarating — if not wet — bicycle rickshaw tour around Teltow in Brandenburg, a town just south of Berlin.

"With me, it's always a good-vibes tour instead of just a bike tour," he says.

Frank is one of 25 rickshaw drivers this week who'll be making the 160-kilometer (100-mile) journey along the path of the Berlin Wall as part of "Cycling without Walls" project. Along the way, they'll pick up small groups of elderly passengers for short, hour-long tours of the bustling streets, canals, and forests the wall once divided.

The project has symbolic timing: East and West came together under one democratic German government on October 3, 1990.  November 9 marks the 30th anniversary of the toppling of the Berlin Wall, which divided Germany for nearly four decades.

"It's exciting to now have this path where the wall once stood and to rediscover so many historic events along the way," says Gabriele Meyer, the project's coordinator. "To experience that with the seniors and to get to know their stories is simply incredible." 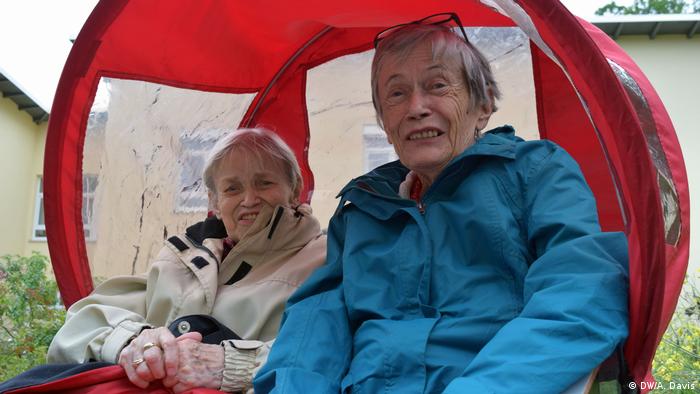 Ruth Alseiks, 90, and Helga Guduhn, 76, prepare to depart for their journey along the path of the Berlin Wall in Teltow, just south of Berlin.

‘It was terrible, but we survived'

One of the passengers along for the ride today is Helga Guduhn, 76, who remembers what it was like when traveling from West Berlin to a neighboring town was virtually impossible.

Though the communist East German regime prided itself on its planned economy and socialist ideology, it couldn't keep its citizens from fleeing to the West in the decade following the end of World War Two. So at midnight on August 13, 1961 — without notice — the East German government closed the border and erected a wall to keep them in.

"We lived near the wall and suddenly we couldn't get through," says Helga, who had family in East Berlin. "We were hardly ever able to get into the East [after that]."

"It was terrible, but we survived," she adds. "Now the border is open. And I'm just as open for everything."

Read more: Reunified Germany is a nation of many faces and variable success 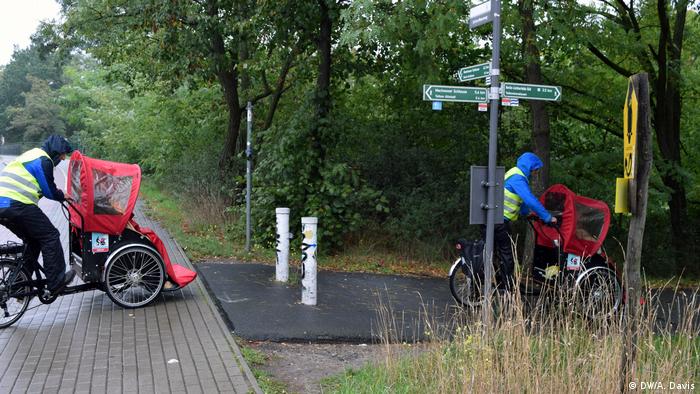 Elderly rickshaw passengers normally wouldn't be able to traverse the bumpy path of the former Berlin Wall in the rain.

That's clear by the smile on Helga's face as the group weaves in and out of former border checkpoints on the path of the Berlin Wall, which is now a nicely paved bike trail.

It's not only that she's now able to cross the border without special permission, she says. Normally confined to a wheelchair, the bicycle rickshaw gives her a chance to be more mobile than she has been in years.

In fact, that's the entire premise of "Cycling without Age," the Danish non-profit organization that launched "Cycling without Walls." What began in 2013 as a small initiative with just five volunteer rickshaw drivers has spread to dozens of countries around the world, including everywhere in the European Union, as well as Canada, the United States and Brazil.

As the organization prepares to enter a new decade of providing innovative mobility solutions to seniors, "Cycling without Walls" celebrates mobility for all at any age, says project coordinator Gabriele Meyer.

"I was 14 when the wall fell — I lived it and remember my mother saying 'To be in Berlin right now!'" she says. "That in Germany we can do without a wall, when other countries are building one — it's great to experience [this project] like that."