The German pavilion at the Venice Biennale was designed decades ago to reflect the aesthetic ideals of the Nazis. Is it a hindrance to artists that should be demolished, or a piece of history that should be preserved? 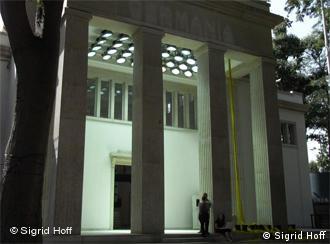 Germany's past looms large in Venice

In a few weeks, people from around the world will flock to Venice for the 12th Venice Biennale of Architecture, which showcases new projects by big-name architects and designers.

Altogether, 28 national pavilions will be open to visitors, including the controversial German pavilion, which is a prime example of Nazi architecture. Now, the Federal Chamber of German Architects (BAK) has started a debate about the building's future.

The German pavilion building - situated in the southern part of Venice's Giardini Park, where the Biennale is held - is not particularly inviting. The entry is large, with four imposing pillars supporting a heavy-looking roof. The room inside has windows high above the ground, not offering any views of the surrounding area. 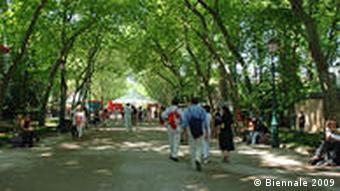 Arno Sighard Schmid, president of the Federal Chamber of German Architects, does not think that the temple-like Nazi-era building represents modern Germany. He wants to see it torn down, saying that it is "neither suitable for art, nor for architecture" and has "no connection to the Venetian skyline."

Instead, he finds that it reflects the character of the Nazi era, which brings an emotional aspect into the debate.

The German Pavilion was first erected in 1909 as the Bavarian Pavilion, based on the designs of a Venetian architect. With its Ionic-style columns, it bore a resemblance to an ancient temple. In 1938, it was altered to reflect the Nazi regime's aesthetic ideals.

Then, in 1993, German conceptual artist Hans Haacke smashed the travertine floor of the pavilion's hall, where Hitler and Mussolini had once stood, leaving the fragments lying on the ground. He called the work "Failed Hope."

A place for expression

But according to Susanne Gaensheimer, director of the Frankfurt Museum for Modern Art and curator of the 2011 Art Biennale - the building is suitable for showcasing contemporary art, though it does represent a challenge for the artists.

"There are many examples of exhibition halls with ideological or ideology-related architecture that show that this very confrontation with architecture has led to fantastic projects and artworks," said Gaensheimer. "You need to differentiate between the outer architecture and what happens on the inside."

Fantastic works of art have been presented in the German pavilion, she added - "and that is what represents this country." 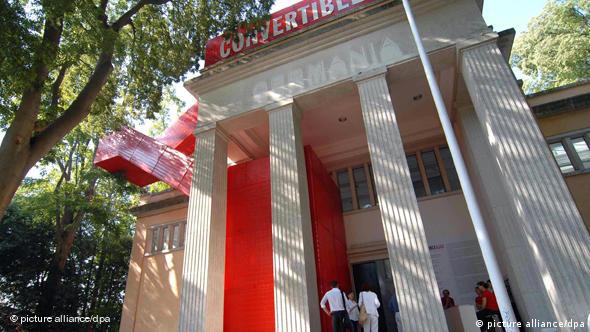 In 2006, the German curator team highlighted the most attractive aspect of the pavilion: the roof

One example was the German presentation at the 2006 Architecture Biennale, which was titled "Convertible City." The team of curators, from the architecture firm Gruentuch Ernst, positioned a bright red staircase through the window on the side of the pavilion, which allowed visitors to climb up onto the roof. From there, they had a magnificent view of Venice.

The project was a good idea, conceded Arno Sighard Schmid, but not one that can be repeated over and over.

Constructing the staircase "was a difficult undertaking, but showed that the roof offers such wonderful possibilities," said Schmid. "And that's the reason I've proposed that our current democratic republic should present itself abroad in other ways than what this pavilion allows."

However, the curator for next year's Art Biennale, Susanne Gaensheimer, maintains that history can't just be torn down.

"Demolishing architecture doesn't mean that you can change history," said Gaensheimer. "On the contrary, we can use architecture to preserve our consciousness of history." 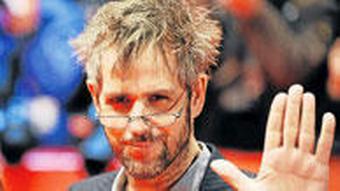 The curator has invited German performance artist Christoph Schlingensief to design the pavilion for 2011. Schlingensief, who is battling lung cancer, has not yet commented on his plans. However, he has been quoted as saying that he wished the German pavilion could be erased with a mouse-click.

Gaensheimer does not interpret this to mean that Schlingensief favors the destruction of the building.

"I can imagine that he meant he would like to make this whole discussion disappear with the click of a mouse," she said. "That's what holds us up, always getting caught up in this discussion."

In his personal blog, Schlingensief has called the idea of tearing down the pavilion "idiotic," saying it was just a quick, unimaginative solution.

In the coming weeks, a museum dedicated to Knut Hamsun, one of Norway's most notable authors, is due to open to the public. Organizers say the writer's association with the Nazi party will be explored in the exhibition. (09.05.2010)

Can a philosopher's life be seperated from his work? The question is at the core of an ongoing debate about German philosopher Martin Heidegger and his links to Nazism in the 1930s. A new book reconsiders the issue. (22.12.2009)