Fighting has taken its toll on the culture scene in the eastern Ukrainian city of Donetsk. But cultural activities continue nevertheless. While the opera still celebrates premieres, other art forms are less welcome. 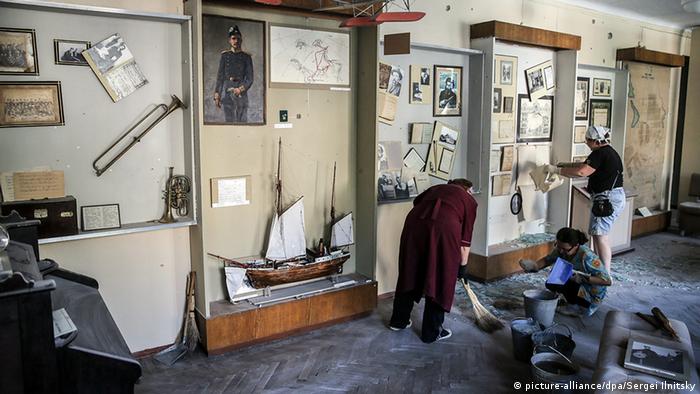 In November, the Donbass Opera in the Ukrainian city of Donetsk offers some easy to digest pieces: Emmerich Kalman's "The Gipsy Princess" operetta, Giuseppe Verdi's "La Traviata" and Luigi Rossini's "The Barber of Seville." It almost seems as if cultural events are responsible for spreading good vibes in the heavily destroyed city.

"For the time being, we're playing for free to see whether anyone shows up at all," says Lidia, who didn't want her real name to be disclosed. "The people here need a distraction from the war."

Lidia sings in the choir and has been a member of the Donbass Opera since the fall of 2012, when they made headlines with their first Wagner opera: "The Flying Dutchman," a German-Ukrainian showcase project.

But these glamorous days are over now. The entire stage setting and all the props were destroyed during the Donetsk conflict. Hit by anti-tank missiles, the depot burned to the ground. 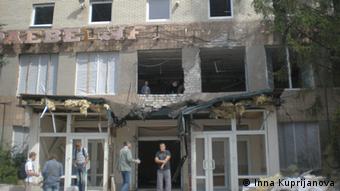 The conflict in Donetsk has destroyed many cultural institutions in the city, such as the State Museum

According to Lidia, most of the singers and musicians fled and only about a third of the orchestra and choir stayed behind.

"It's infuriating," says Vadim Pisarev, a famous choreographer and ballet instructor whose Donetsk-based dance academy once provided many Russian, Ukrainian and German dance company with solo dancers. "Our theater is on a territory where the war still rages."

The Donetsk Theater was once a center for contemporary theater, which mainly performed in Ukrainian. One of the most recent premieres was "The Nation," a play based on a novel by Maria Matios . It's about Ukrainian insurgents fighting against the Soviet powers in the 1930s.

But now, the theater is forced to do a complete U-turn: "If we staged Ukrainian plays today, the people would be shot on the spot," says Ukraine's Culture Minister Evgeny Nishuk. "But we'll continue to stage performances, we have plenty of Russian plays in our repertoire." 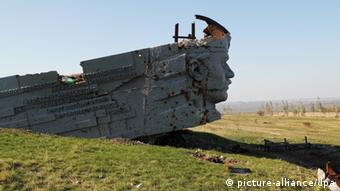 The Savur-Mohyla memorial has seen decades of war and bloodshed

Authorities say more than 30 cultural institutions in Donetsk have been destroyed or heavily damaged. The Savur-Mohyla memorial, erected in the 1960s to honor the fallen soldiers of World War II, collapsed after weeks of shelling. The hill the memorial was built on saw violent clashes between Germany's Wehrmacht and the Red Army in 1943. And in July and August 2014, countless men lost their lives there again when clashes between pro-Russian separatists and the Ukrainian army erupted.

The popular Donetsk Regional Museum of Local History is another victim of the war. The building was hit 15 times by anti-tank missiles. "I don't think those were targeted attacks," head curator Tatyana Koynash says. "We must have been in the line of fire by accident."

All the same, the museum's director Evgeny Denisenko estimates that more than 30 percent of a total of 150,000 exhibition pieces were destroyed.

"If I didn't have grey hair already, it certainly would have turned grey at the shock," he says. Presumably, the damage would have been even greater if his employees hadn't evacuated particularly fragile and valuable exhibits to the basement well in advance, the director adds. According to him, the employees all helped out because they are so enthusiastic about their work. They received their last paychecks in spring. 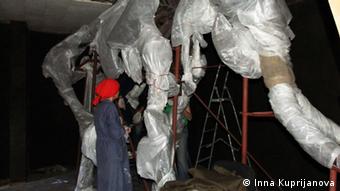 Miraculously, this mammoth skeleton emerged from the shellings unscathed

The costs of renovating the museum would amount to about 6 million euros ($7.4 million), Denisenko says. Right now, volunteers are busy getting the building ready for winter. Igor is one of them. "The museum is our history," the unemployed construction worker says. "It must and it will function again."

The employees of the Izolyatsia Center for Contemporary Art are far less optimistic.

Modeled on Germany's Ruhrgebiet - an industrial landscape with a strong cultural focus - a private foundation had created a modern center for contemporary art in an abandoned factory building on the outskirts of Donetsk. "Culture through change, change through culture" was the motto.

But then pro-Russian separatists occupied the property, destroyed the artworks and looted the book store. The center's employees fled to Kyiv, where they now continue their work as "Izolyatsia in Exile".

"I may not be an expert, but I can tell real art from this pornography," says Leonid Baranov, one of the occupiers. Like a trophy, he holds up a photo by a famous Ukrainian photographer, Boris Mikhailov. "That much I can promise: in the Donbass People's Republic, we won't have this kind of art!"

More casualties amid fears of an escalation in eastern Ukraine conflict

There are growing fears that a full-blown conflict is set to break out in eastern Ukraine. Meanwhile, the Royal Australian Navy has said it is tracking Russian warships in international waters off its northern coast. (13.11.2014)

Painting a revolution at Kyiv's Maidan

Kyiv's Maidan was the site of clashes between anti-government activists and Ukrainian authorities in early 2014. Artist Mariya Diordichuk took her paintbrushes to the frontlines to document the revolution through art. (04.07.2014)

With its expansionist approach in Ukraine and controversial laws at home, Russia's ties with the West are strained. Kasper König tells DW what's difficult in planning a modern art show there, and why it's so important. (03.06.2014)