When Little Tiger is lying in the hospital, he longs for "trout with almonds," just like Little Bear cooks for him at home. And when Little Tiger and Little Bear strike out for Panama, following the smell of bananas, they eventually end up back in their small, cozy home. What's to be learned from all this? Perhaps that it's always best at home.

For children's book author and illustrator Horst Eckert, aka Janosch, home is Tenerife, the largest of Spain's Canary Islands. He's lived there for more than 30 years with his wife Ines. His 1978 children's story, The Trip to Panama, brought him fame and fortune.

What he likes best, says Janosch, is to lounge in his hammock doing nothing at all. But even at 90, he isn't really idle. The author writes for Die Zeit magazine supplement, and he's also working on a new children's book. 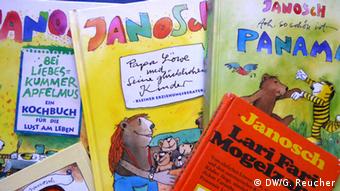 Born on March 11, 1931 in the town of Hindenburg (today the Polish town Zabrze) in what was then Upper Silesia, he and his family fled to West Germany after World War II. Janosch studied art in Munich only to be discharged after a few semesters for "a lack of talent."

That early setback didn't deter him, however. Janosch worked as a freelance artist and soon discovered that he also had a knack for writing stories. His first children's book, Die Geschichte von Valek dem Pferd (The Story of Valek the Horse), was published in 1960.

He is best known, however, for his touching 1978 tale of two friends who set off to find the land of their dreams in Panama. The Trip to Panama won him the German Children's Literature Award in 1979.

Janosch's work is extensive — he has written and illustrated more than 300 books, which have been translated into 40 languages. Children and adults alike enjoy his lovingly drawn watercolors, and the warm-hearted, simple humor. His characters — Little Bear, Little Tiger, Tiger Duck and the rest — do silly things, sometimes even lying or looking out for their own interests, but in the end friendship always wins. 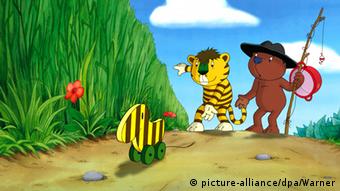 The series has also been adapted into several films, including this 2006 version

"That's always what I'm after, since it was lacking in my own family," he once told his biographer Angela Bajorek. Janosch had an unhappy childhood: his father was an alcoholic and regularly beat him — as did his grandmother, a strict Catholic who threatened him with God's wrath.

The characters from Janosch's stories — above all the Tiger Duck on wheels — have given him cult status around the world, and can be found on countless mugs, plates, pillows, sheets and towels. The stories have been made into movies and of course sold in the form of picture books by the million worldwide.