Croatia cleared to join the EU in July

The European Commission has announced that Croatia will join the EU on July 1 this year. The country has implemented a string of reforms requested by Brussels, the latest report pointed to some work still outstanding. 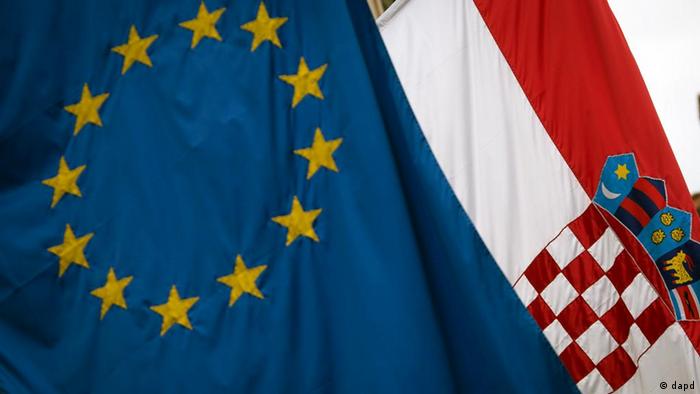 Brussels decided on Tuesday that Croatia was ready to join the European Union later this year. Croatia will become the 28th member of the bloc, with a 15-page final report from the European Commission setting the date at July 1.

"The Commission concludes that Croatia will be ready to join the European Union on July 1, 2013," the report said, adding that Croatia "has shown the will and ability to fulfill all outstanding commitments in good time before accession."

Croatia first signed up as an official EU aspirant in December 2011; the European Commission has published regular progress reports since.

"Croatia is now a different country compared to at the start of the accession process," EU Expansion Commissioner Stefan Füle said after a meeting with the Croatian Prime Minister Zoran Milanovic in Zagreb.

Croatia fears that Slovenia will get in the way of its long-planned entry into the European Union on July 1. Continuing tensions, particularly over Slovenia's largest bank, are threatening to cause a delay. (02.02.2013)

Would-be EU entrants have to demonstrate legislative and democratic progress that brings them into line with EU values. Tuesday's Commission report praised the government in Zagreb for privatizing and restructuring its shipyards, among other measures, while identifying corruption and organized crime as projects where the job was not yet done. The EU executive pointed in particular to the sentencing for those found guilty of corruption.

"Efficient sentences, which serve as a deterrent, are necessary when it comes to cases of corruption, major crimes and organized crime," the report said, warning that this was the only way to avoid a "climate of impunity."

German Foreign Minister Guido Westerwelle welcomed the decision, saying he was confident that the German Bundestag would approve Croatia's accession and "take due notice of the positive findings by the Commission."

"It is also important that the Croatian government has made it clear that it will not relax its reform efforts even after joining," Westerwelle said.

Croatia will become the 28th EU member and only the second of six former Yugoslav republics to join the bloc. Slovenia was granted entry in 2004.