70 years after the author's death, a scholarly edition of Hitler's "Mein Kampf" hit the book stores. Demand is huge for the 2,000 page tome. 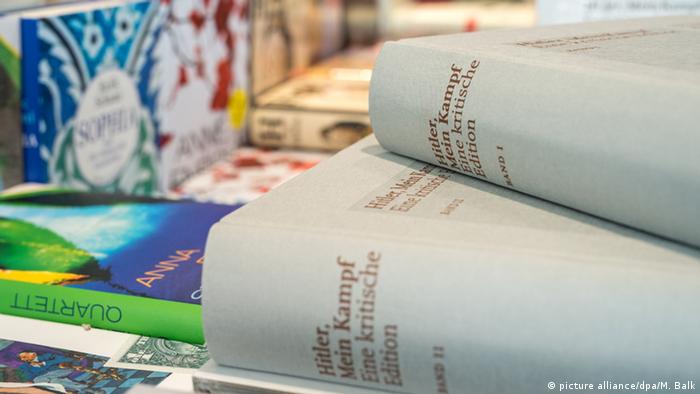 At six kilos, the two plain grey, cloth-bound volumes are heavy, too bulky to be read on the go: books designed for research and libraries. A far cry from the brick red original, with its old blackletter fraktur typeset.

Launched at bookstores just a few weeks ago, on January 8, sales of the 59 euro ($ 64) tome have been surprisingly brisk.

The first 4,000 copies were instantly sold out.

Orders keep coming in, the IfZ says, adding that 15,000 copies have already been reprinted, and a third edition is in preparation.

There are several explanations for the huge interest in the book, Christian Hartmann, who headed the IfZ project, told the audience at a book presentation at the Bonn-based Haus der Geschichte history museum earlier this week. "For one, it's one of the last existing remnants of the Third Reich." And secondly, he added, it's a book many German families are still very aware of.

The politically ambitious project - 2,000 pages and more than 3,000 clearly arranged footnotes and annotations - is a good read for the younger generation, too, a page by page dissection of Adolf Hitler's ideological polemics.

More than 12 million copies of the 780-page-long original "Mein Kampf" were printed and distributed to the German people, and it was translated into 18 languages before the Allies banned further reprints in Germany after the end of WWII. To this very day, more than 1,000 different editions are available in second hand specialty book stores, libraries and online shops.

Deconstructing Hitler's propaganda:"There is hardly any book that is more overladen with such a multitude of myths, that awakens such disgust and anxiety, that ignites curiosity and stirs speculation, while simultaneously exuding an aura of the mysterious and the forbidden," the IfZ notes on its website.

Expectations of a critical scholarly edition were high, and accordingly, the tome is up to date on all aspects of historical research, including chapters on Hitler's use of language, the Nazi party history and how Hitler's ideology was translated into racial policies.

Closely following the original text, the critical edition traces the story of Adolf Hitler's inexorable rise, culminating in a dictatorial autarchy. It's shocking to read how clearly the annotated edition of "Mein Kampf" shows up where Hitler's original work was headed, as well as the early beginnings of Nazi Germany's eventual political development.

"It's important to deal with the symbol - we can't just treat such a work as a regular historical source," he added.

Meanwhile, the IfZ has received 35 to 40 requests for translation rights. The institute isn't disinclined, the director confirmed, adding, however, that no contracts have yet been signed for translations of "Hitler, Mein Kampf."

The first print run for the new critical edition of "Mein Kampf" was surprisingly modest: 4,000 copies. With all the debate surrounding the work, no wonder interest in the book is much higher. (14.01.2016)

The book penned by an imprisoned Adolf Hitler in the 1920s has re-entered the public domain. The new critical edition - replete with copious footnotes - is the first edition put on sale in Germany since 1945. (08.01.2016)