Some 200 works from an art collection in Aachen, Germany, disappeared into the former Soviet Union at the end of World War Two. Parts of these works have now surfaced in Ukraine, prompting a rare exchange initiative. 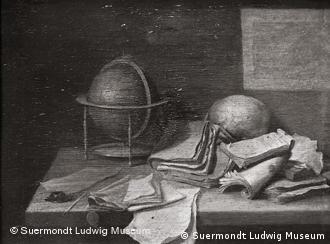 The exhibition "Phantom Gallery" in Aachen's Suermondt-Ludwig-Museum is unusual and for many visitors, irritating. In part, empty frames hang on the darkly painted walls or black-and-white photographs -- reproductions of artwork whose whereabouts are unknown.

"We are showing pictures, which are no longer here," said museum director Peter van den Brink.

Shortly after the exhibition opened in September, van den Brink received surprising news from Ukraine. German tourists had discovered a number of works of German origin in the Simferopol Art Museum in Crimea. The couple photographed and filmed the works, and handed the complete material over to the Aachen art expert.

"We were therefore able to even identify pictures which we had documented in our loss catalog," van den Brink said.

Keeping away from politics

Getting in touch with his colleagues in Simferopol was surprisingly quick and easy, van den Brink said. Soon, a small team of experts from Aachen will be heading to the Crimean capital. 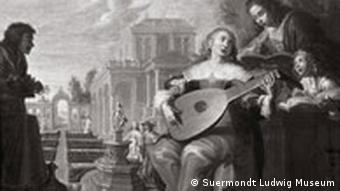 Company in a Garden, Playing Music by Johann Hulsman

"We're going there as a research team in order to determine which pictures exactly are there and in what sort of condition they're in," said curator Heinrich Becker.

The head of the Simferopol Art Museum Larina Kudryashova turned out to be an open and communicative person, van den Brink said.

"As opposed to her colleagues in the former Soviet Union, she had no fears about taking the necessary step and opening doors," he said. The Dutchman said he placed emphasis on personal contacts and wanted to avoid political complications on the delicate topic of looted art.

That's exactly what Kudryashova wanted too. She too emphasized seeking dialog among experts and preferably excluding politics. She said she had high expectations from the visit from Germany. She hoped for cooperation on a large scale, which would benefit not only her museum, but also other cultural facilities in Simferopol.

"Precisely because we are not politicians, but rather museum staff, I expect a constructive collaboration," Kudryashova said. "We will combine our efforts."

The story of the looted artwork began in 1942 with the stock removal of paintings from Aachen. The works from the 17th to 19th centuries -- in part very valuable -- were moved to the Albrechtsburg castle in Meissen near Dresden in eastern Germany to be protected from bombings. 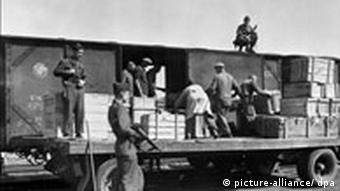 Many works of looted art were returned after the war ended

At the time, Aachen was suffering greatly under the air attacks by the Royal Air Force and Dresden was far away. No one could foresee at the time that worse bombings were to come with the Red Army tied up in bloody battles in Stalingrad.

The paintings probably ended up in Ukraine as looted art via Moscow or the former Leningrad, today Saint Petersburg. For decades, they remained stored away. Now, of course, they can be viewed in Simferopol's Art Museum -- with explicit mention of their provenance.

The museum stresses that the pictures are considered compensation for Ukraine's own destroyed cultural goods. This corresponds to existing Ukrainian laws, Kudryashova said.

At the same time, the Ukrainian art expert has suggested a joint exchange project. 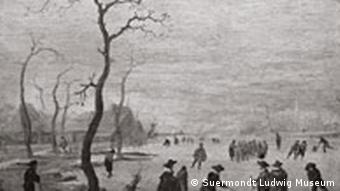 "One could show part of the works we have in Aachen and in exchange, the German side could make works of the same value available to us to show in Simferopol," Kudryashova said.

Aachen's museum director van den Brink said he liked the idea but also foresaw pitfalls. For one, he said, he didn't even know whether Kudryashova was authorized to realize such a project. After all, she was not the cultural minister of Ukraine.

In addition, he said he had to discuss with the German Foreign Office "whether we can even bring our pictures back to Germany, without them being directly confiscated due to legal regulations."

Van den Brink said he was obligated to stick to existing laws and fundamental claims to the works. He said he wanted to exclude political implications, international regulations and German sensitivities on the issue. This was up to top-level politics.

But he said he could imagine that the findings in Simferopol would be discussed at the top level at some point, for example during a visit by German Chancellor Angela Merkel to Ukraine.

Russia has returned six medieval stained glass window panes looted by the Soviet Red Army in 1945 to a church in Frankfurt an der Oder, on the Polish border. (18.11.2008)