Russia has returned six medieval stained glass window panes looted by the Soviet Red Army in 1945 to a church in Frankfurt an der Oder, on the Polish border. 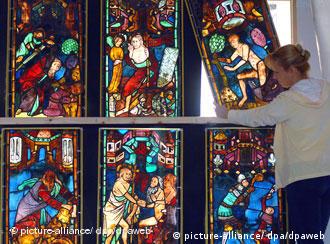 All the Marienkirche's panes should be in place by next year

The 700-year-old windows were thought vanished or destroyed until 2005, when they were discovered by a Russian art historian at a cloister outside Moscow, under the jurisdiction of the Pushkin Museum.

The first 111 panels, which had been in the possession of the Hermitage Museum in St. Petersburg, were returned by Russia in 2002.

Another three years would pass before the remaining six panels dating back to the 14th century would be restored to their rightful home at the Marienkirche, the Church of Our Lady.

Completing the panel of 117 panes in the church's 20-meter (65-foot) high windows depicting scenes from the Old Testament, the panes were delivered by German Culture Minister Bernd Neumann and Russian Ambassador to Germany Vladimir Kotenev. 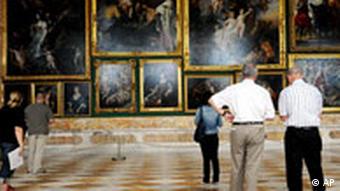 In summer 2008, Berlin hosted an exhibition of photos of paintings missing since WWII

At the ceremony on Monday, Nov. 17, marking the occasion, Neumann said the restitution was a sign of improving relations between the former wartime foes.

"Now that the last of the 117 windows from the Marienkirche can finally return to their proper place it is a further sign of reconciliation and the friendship between our two countries," he said.

The panels had been removed from the Marienkirche during the war to protect them from bombing. They were stored in the basement of the Potsdam Neues Palais, where they were seized by Red Army soldiers in 1945. The Soviet Union claimed them as war booty and shipped them back to Russia.

At the ceremony, Kotenev also noted that Nazi Germany had been guilty of wanton looting during the war and stressed that the process of restoring property to its original owners must be reciprocal.

"I would like to stress the word 'mutual' because there are still harsh critics and the issue of looted art is often treated in the media as one in which it is the Russians who owe a debt," he said. "It is often carelessly -- or intentionally -- forgotten that during the raids of the Wehrmacht many Russian museums were systematically plundered."

Nonetheless, he hailed the return of the panels as "a milestone in a process begun fifty years ago."

"A homecoming is always a special experience," said Kotenev. "Especially when that homecoming follows a long absence." 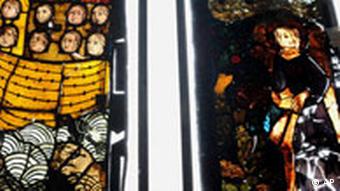 The panels depict biblical stories such as Noah's Ark

In 1958, some 1,5 million works of art were returned to East Germany by the Soviet Union after the Hague Convention for the Protection of Cultural Property made it illegal to use cultural property as war reparations.

Previously, Moscow declared that art seized by the Red Army was retribution for the 27 million Soviet lives lost during the Second World War.

However, disputes over art seized during and after the war continued to overshadow German-Russian relations since the fall of the Berlin Wall in 1989.

Recent years have seen some of the Russian cultural treasures looted by the Nazis returned to Russia. Russian deputies passed a measure in 1997 declaring artwork seized from Germany to be rightful spoils of war to compensate for the sacking of its own collections.

But Germany has refused to relinquish its claims. Experts say that there are still some 2.5 million objects missing from Germany believed to be in the former Soviet Union.

Meanwhile in Frankfurt, mayor Martin Patzelt announced that the missing panes in Marienkirche's stained glass windows will now undergo restoration and are expected to be returned to their original position by next year.

A new Web page run by Germany's Finance Ministry attempts to find the proper owners of looted Nazi art by documenting photos and descriptions of paintings and other pieces of art confiscated during the Third Reich. (01.08.2007)