COVID: US health expert Fauci warns omicron is 'raging' around the world

Top US pandemic adviser Anthony Fauci has urged Americans to get vaccinated and boosted. Meanwhile, two senators have tested positive for the coronavirus.

The omicron variant of the coronavirus is "raging" around the world, the White House's top medical adviser Anthony Fauci said on Sunday.

Fauci said in a TV interview with NBC that the "real problem" for the US hospital system is that "we have so many people in this country who are eligible to be vaccinated who have not yet been vaccinated."

Why is the US government worried?

The US government is expecting a series of breakthrough infections due to increased travel over the Christmas holidays. Fauci said most people who have been vaccinated and gotten a booster should be fine, especially if they wear masks in crowded areas.

In the interview, Fauci urged citizens to get a booster shot to increase protection from the virus.

He also highlighted the importance of providing vaccines to the rest of the world.

"One thing that's very clear... is its [omicron's] extraordinary capability of spreading," Fauci told NBC. "It is just... raging through to the world."

Since it was first reported in November, omicron has been identified in dozens of countries. The spread of the variant has prompted many countries to reimpose travel restrictions and other measures. 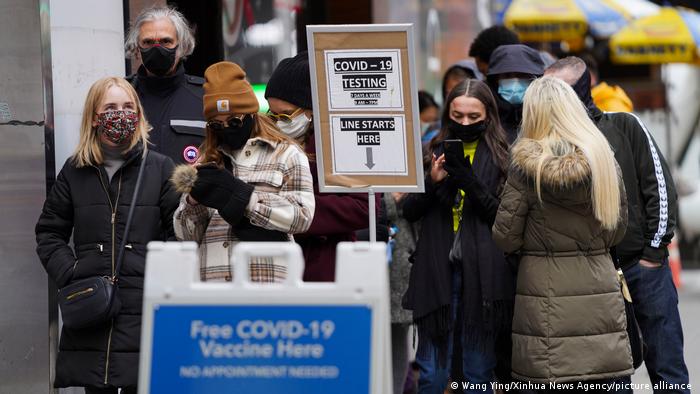 Despite indications that it is not more severe than the delta variant of the virus, early data suggests that omicron could be more resistant to vaccines and have higher rates of transmission.

Fauci called into doubt early reports on omicron's lower severity, arguing that the low rate of hospitalizations recorded in South Africa could be a result of underlying immunity from widespread previous infections.

He also warned that even if the variant causes less severe illness, it could still put a considerable strain on the US hospital system due to how quickly it spreads.

Meanwhile, Senator Elizabeth Warren of the Democratic Party said on Sunday that she had tested positive for COVID-19 and is experiencing mild symptoms. She said in a tweet that she is vaccinated and boosted and regularly tested for COVID-19, and had tested negative earlier this week.

In a subsequent tweet, Warren also urged people to get vaccinated and boosted as this could "save lives."

Senator Cory Booker of the Democratic Party also tested positive for the coronavirus on Sunday. He said in a tweet that he had relatively mild symptoms and had recently had a vaccine booster.

"I'm certain that without them I would be doing much worse," Booker said, referring to the two vaccine doses and booster he had received.