As the United States cuts isolation time for asymptomatic COVID cases in half, scientists are worried the guidelines support the economy, rather than public health. 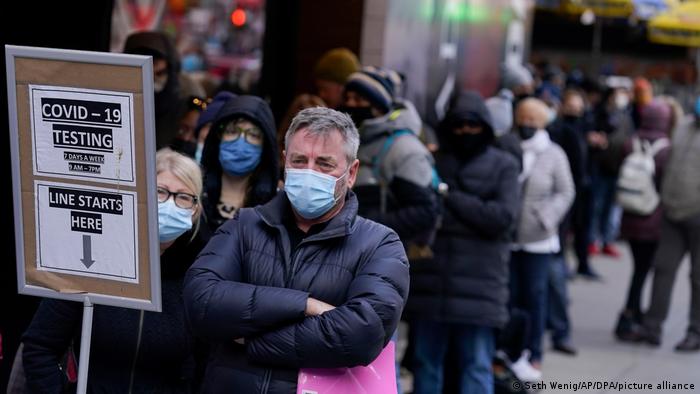 The US national health agency's decision to slash the isolation time for people with asymptomatic COVID-19 has raised concern among scientists who say the decision will increase the spread of the coronavirus and overburden hospitals.

On Monday, the Centers for Disease Control and Prevention said people with asymptomatic COVID-19 only need to be in isolation for five days and don't need a negative PCR or rapid antigen test. The five days of isolation must be followed by five days of wearing a mask around others.

The same rule would apply to people whose symptoms were resolving after five days in isolation.

The decision comes amid fears of staff shortages in industries such as health care and tourism. The US has also faced a shortage of rapid-antigen tests in recent weeks.

The CDC says the recommendation is motivated by scientific data that show that the majority of SARS-COV-2 transmission usually occurs one to two days prior to the onset of symptoms and two to three days after.

US coronavirus cases on the rise: Epidemiologist Peter Chin-Hong speaks to DW

The data that the CDC used to make its recommendations have not been made publicly available.

A study published in the JAMA Internal Medicine journal in August  found that the transmission potential was highest two days before and three days after the onset of symptoms. But it is still possible to transmit the virus after three days.

"The original quarantine periods are set based on what we've found scientifically about how long we detect live virus — in other words, that the person could possibly infect others," Emma Hodcroft, a molecular epidemiologist at the University of Bern in Switzerland, told DW.

Zoe Hyde, an epidemiologist at the University of Western Australia, told DW that, because people are most infectious in the first few days, shortening the isolation period makes some sense, but only if there is a negative test.

"I think it's a very bad idea to do away with the need to test negative, because it's going to lead to a lot of people spreading the virus in the community," Hyde said.

"It also sends the wrong message about how serious the virus is. It might not matter much to the asymptomatic person who's been allowed to leave quarantine, but it could be devastating to vulnerable people in the community they come in contact with," she added.

Scientists fear that the decision to halve isolation times for asymptomatic and rapidly recovering patients is not being driven by public health concerns.

"It's certainly not a public health guideline — it's more towards [needing] to make sure that we are able to keep things running pretty much, so it's more an economic guideline," said Tobias Kurth, a professor of public health and epidemiology at Berlin's Charite hospital.

"In some areas, it may be necessary to be able to relax the rule a little bit, but not as a general recommendation," Kurth said.

Hyde echoed Kurth's concern: "I worry that it's politics driving this decision, not science."

Hodcroft said the real solution to shortage of staff in the workplace would be to get case numbers down.

"By allowing those who could still be contagious back to a working environment, you may enable transmission, letting more people get infected, and potentially perpetuating the problem," Hodcroft said.

Another concern is how hospitals will cope if infection rates rise even higher as a result of asymptomatic people not being in isolation long enough and negative tests not being required.

Kurth warned that, in countries facing waves fueled by omicron — such as the UK, France, the US and Germany — the huge amount of cases will cause health care systems to collapse.

"It really seems like a terrible time to be easing restrictions with the omicron variant spreading so quickly; I can't see how the hospital system is going to cope with this," Hyde said.

The CDC's decision comes as other countries start discussing changing isolation rules for people with different levels of vaccination.

Germany is currently mulling changes to isolation rules for people who have had contact with an infected person if they do not have symptoms.

But, unlike in the US recommendations for asymptomatic cases, a negative COVID-19 test would still be required.