India is facing economic turmoil in the wake of the coronavirus pandemic, with many people out of work and prices rising. Economists say there is little sign of relief on the horizon. 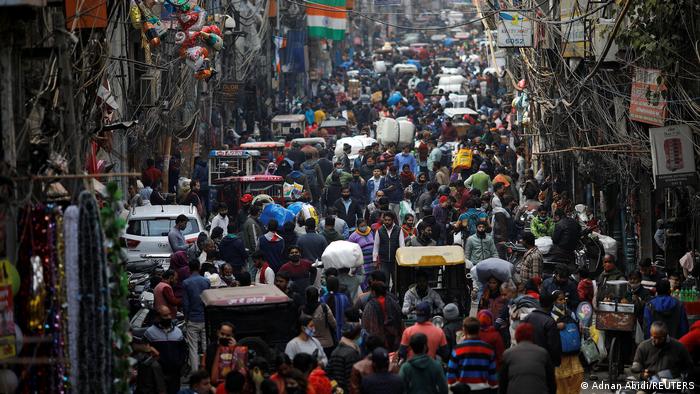 "The authorities had to finally suspend the recruitment. We wanted to draw attention to joblessness that is worsening in the country," Jha said.

Neelam Kapoor, a 26-year-old homemaker from a middle-class household in Delhi, has struggled for two years to keep the lights on and pay rent.

Her husband, Rajesh, a salesman, lost his job in a garment manufacturing firm last year during the height of the pandemic and has yet to find another job.

"Our savings are depleted. Retail prices have skyrocketed. Everything has gone up from oil, cooking gas and services. It is a miracle how we manage every month," Kapoor told DW.

Jha and Kapoor are only two out of millions of people affected by India's current economic woes brought on by acute unemployment and spiraling inflation.

Rising cost of living, job losses and inflation have become full-blown crises, according to economists.

The unemployment rate in India, Asia's third-largest economy, rose to 7.9% in December, which corresponds to about 35 million people, Mahesh Vyas, managing director of the Centre for Monitoring Indian Economy (CMIE), told DW.

"Inflation seems poised to rise in the short run, but nothing seems to suggest that the unemployment rate will climb down commensurately. The near-term economic outlook therefore looks worse than where India stands today," said Vyas.

The nation's deteriorating labor market is likely to hamper post-pandemic economic recovery, as unemployment seems to persist in more than one sector or region, according to CMIE.

Vyas said unemployment has been increasing since September 2020, which is a not a good sign for economic recovery.

Economists have said India will likely be stuck in the near future with persistent unemployment, high inflation, low demand and falling savings and investment.

"Tackling unemployment is the predominant concern in India right now. This is a humanitarian crisis and I argue that the government should be the employer of last resort in such an emergency. Strengthening employment both in rural and urban India is vital," Lekha Chakraborty, professor at the National Institute of Public Finance and Policy, told DW.

"The Indian economy is suffering from long COVID. Lockdown strategies helped to flatten the curve but it has created almost irreversible economic disruptions," she added.

"We observe stable and positive double-digit growth in the credit flows to MSMEs, showing a stable pace of recovery of this sector accounting for a major fraction of the informal labor. The revival of MSMEs is a formidable task that lies ahead," Bhattacharya told DW.

MSMEs are the backbone of the Indian economy. These businesses contribute about 45% to manufacturing output, more than 40% of exports and over 28% of GDP. This amounts to employment for over 110 million people, which in terms of volume is second only to the agricultural sector.

Divide between rich and poor likely to grow

Stagflation is defined as a situation involving rising prices of goods and services combined with high unemployment and stagnant demand.

"Wholesale inflation is over 14% and unemployment has expanded. Without private investment, we may be heading toward stagflation," said Mitra.

Unemployment is especially concerning for young people trying to enter the job market, with no relief on the horizon. Inflation also puts pressure on people's savings. And both factor in to rising economic inequality in India.

According to the recently published World Inequality Report 2022, India is among the most unequal countries in the world with rising poverty and an affluent elite. The top 1% of the population now controls 22% of the national income, and the bottom 50% has a share of just 13% of the country's income, according to the report.