Chancellor Olaf Scholz has pointed to declining hospitalization and death rates as evidence it's time for "a new phase of the pandemic." State leaders have accused him of making unilateral decisions. 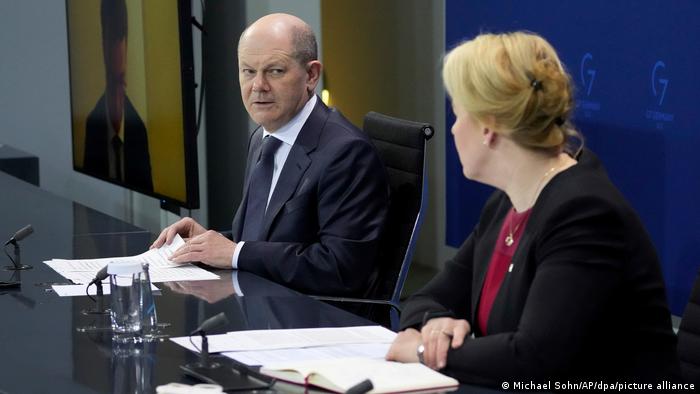 As of Sunday, masks will only be legally required on public transportation, in hospitals and care homes. Current rules about proving that one is vaccinated or recovered from a coronavirus infection in order to enter places like restaurants or museums will also be dropped.

Leaving a meeting with the leaders of Germany's 16 federal states, Scholz acknowledged that state governments have sharply criticized the plan, citing record-high infection numbers across the country.

However, the chancellor said the current wave of infections has not led to the same overwhelming number of deaths and infections as seen in previous waves, and therefore it was time to recalibrate how Germany approaches COVID-19.

'A new phase' of pandemic

"We are entering a new phase of the pandemic, in which we, like nearly all our neighboring countries, will be getting rid of nearly all protective measures," he said, adding that those who are vaccinated and boosted are likely to only get a mild infection, if at all. Scholz said he hoped this would encourage more people to get the jab as Germany's vaccination rate continues to lag behind its neighbors.

State leaders have accused Berlin of making unilateral decisions without consulting them. They have also criticized the end of mandatory masking in most public spaces and say a new rule governing what happens in so-called "hot spots" is almost impossible to implement.

States are allowed to extend the current measures until April 2, but after that the federal mandates will be dropped.

Chancellor Scholz called on individuals to take it upon themselves to continue to take preventative measures "such as masking, where it makes sense."

The German health minister has called on the federal states to reevaluate the coronavirus rules before restrictions are lifted. In other news, a Chinese city locks down as COVID cases rise. Follow DW for more.