The European Union has cemented its support for the German-US vaccine technology by placing a massive order. 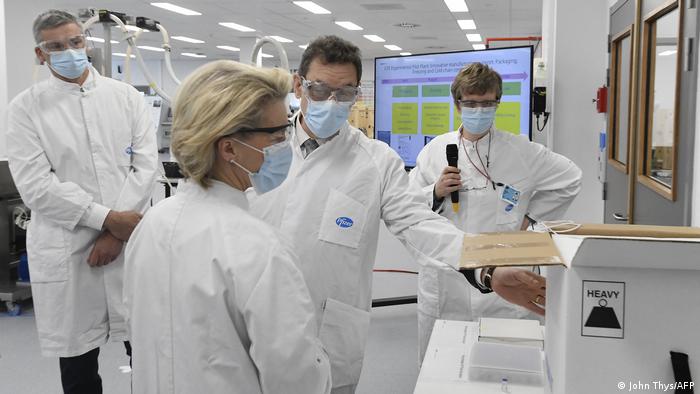 The European Commission has struck a deal with BioNTech-Pfizer to buy up to 1.8 billion additional doses of their COVID-19 vaccine, President Ursula von der Leyen announced on Saturday.

The deal comes as EU countries ramp up their coronavirus vaccine programs after a shaky start, due to delivery delays.

"Happy to announce that the European Commission has just approved a contract for guaranteed 900 million doses," von der Leyen tweeted.

The EU executive's arm announced last month that negotiations on the contract were underway.

What else is in the deal?

The new contract also ensures that all the essential components should be sourced from the EU.

The EU is looking to follow up the deal with "other contracts and other vaccine technologies," said von der Leyen.

How much is the deal worth?

The finished deal with the joint German-US pharmaceutical venture is worth up to €35 billion euros ($43 billion), the German Press Agency reported.

The commission has not disclosed how much it pays its various suppliers per dose.

Bulgarian Prime Minister Boyko Borisov said earlier this month that the cost of each shot in the new deal was around €19.50 ($23.72) — higher than in previous contracts, which reports suggested worked out at €15.50 per shot.

EU sources confirmed that the cost of each new dose would be under €20.

Two shots are needed for vaccination.

This is a hike from the price of the AstraZeneca jab which is purported to have cost the EU under €2 per dose.

What is the BioNTech-Pfizer shot?

It was developed by the US-based firm Pfizer and Germany's BioNTech.

The active ingredient in the vaccine is messenger RNA or mRNA. This contains the instructions for human cells to construct a harmless piece of the coronavirus called the spike protein. The human immune system recognizes the spike protein as foreign, allowing it to mount a response against the virus upon infection.

This is different from the Oxford-AstraZeneca and Johnson & Johnson vaccines that use the more typical viral vector technology.

The different techniques used to create the vaccines explain the variations in price.

Vaccines that 'prove their worth'

Von der Leyen said that the European Union needed to concentrate on technologies that had proven their worth.

She has also said that the mRNA technology used by BioNTech-Pfizer has proven safe and effective.

Her comments were likely a blow to AstraZeneca. The firm has delivered far below the quantities in its contracts. Its jab has been tarnished bya link to very rare blood clots.