The Dutch health minister has announced an end to most restrictions by February 25, as cases and hospitalizations drop. DW has the latest. 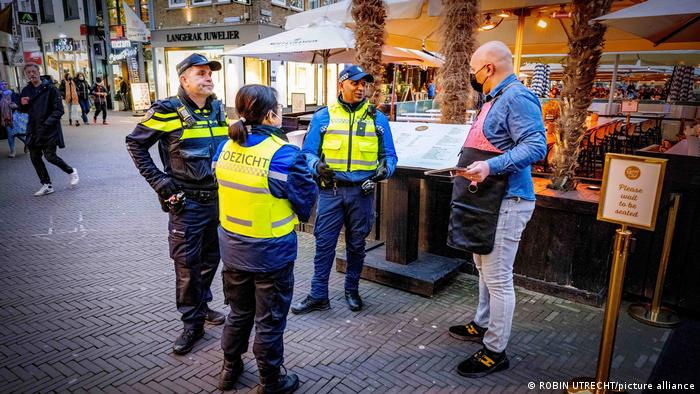 The Netherlands' Health Minister Ernst Kuipers on Tuesday announced that the government will drop nearly all coronavirus restrictions in the country by February 25, as infections, hospitalizations and deaths from COVID-19 have dropped significantly.

"The country will open again," Kuipers told reporters at a press conference in The Hague. "We will go back to normal closing times."

The minister also said social distancing measures would become a thing of the past and noted: "Masks are only obligatory on public transport and in the airport. Keeping your distance and wearing a mask remain sensible, but there is no obligation."

Nevertheless, Kuipers was quick to add that the pandemic was still not entirely over and that vulnerable citizens needed to remain vigilant.

The Netherlands had previously imposed some of the toughest coronavirus restrictions in the EU, especially in the wake of a surge in infections with the advent of the highly contagious omicron strain in December.

In both January and November of 2021, police clashed with rioters looting and violently protesting restrictions. The riots raged for days in each case, with property damage, hundreds of arrests and injuries to both police and protesters.

With the lifting of restrictions, bars, restaurants and clubs will return to normal pre-pandemic opening hours and most social distancing and mask restrictions will be dropped.

Here are the latest major developments on coronavirus from around the world.

The leader of Hong Kong has said a surge of coronavirus cases is overwhelming the city's emergency resources.

Chief Executive Carrie Lam, however ruled out a hard lockdown. "We have no plans whatsoever to impose a complete, wholesale lockdown," she told reporters.

Daily infections have surged by about 20 times over the past two weeks.

Lam said she could not "preclude" the possibility of postponing next month's chief executive election.

Travel giant Trip.com Group will allow staff to work from home for two days a week.

It is the first tech company in China to introduce such a hybrid work policy.

The company's executive chairman, James Liang, said the practice was good for morale and encouraged other Chinese companies to adopt it.

During a trial last year, the company found that staff turnover fell by one-third with no significant impact on performance, while nearly 19 out of 20 employees said the change helped improve their efficiency.

Indonesia reported a record 57,049 new infections on Tuesday, which exceeds the previous record from July 2021 which sat at 56,700.

Health authorities also reported the deaths of 134 people. The surge in infections is being driven by the omicron variant.

The World Health Organization has warned that Eastern Europe is about to be hit by a new wave of the omicron variant.

Over the past two weeks, cases of COVID-19 have more than doubled in Armenia, Azerbaijan, Belarus, Georgia, Russia and Ukraine, WHO's Europe regional director Dr. Hans Kluge said in a statement.

Kluge urged authorities to improve vaccination and other measures.

he would rather miss the French Open, Wimbledon and any tournament rather than being forced to get the coronavirus vaccine.

Djokovic told the BBC that he is not against vaccines, but wants "the freedom to choose what you put into your body."

The Netherlands is dropping most COVID-19 measures, including social distancing, mask-wearing and the coronavirus passport by the end of the month.

Some restrictions will remain for large gatherings such as festivals and nightclubs.

In Germany, Health Minister Karl Lauterbach says the country's huge wave of omicron coronavirus infections has broken and the country can begin relaxing its pandemic response.

"The peak of the omicron wave has passed - pretty much exactly on that day that I predicted a month ago," Lauterbach said in comments to the mass circulation Bild newspaper, adding that a "moderate" easing was now possible.

The minister was speaking ahead of a meeting of Chancellor Olaf Scholz and Germany's 16 state premiers scheduled for Wednesday.

"The measures have been spot on," Lauterbach said of the country's COVID-19 policy so far. "This has enabled us to reduce the number of deaths significantly and we have come through this omicron wave really well compared to other countries."

For the third day in succession, there was a dip in Germany's seven-day incidence of infections to 1,437.5,the Robert Koch Institute for disease control said on Tuesday.

The United Kingdom's Health Security Agency (UKHSA) said that long COVID-19 is less likely to affect people who have been vaccinated than those who haven't, in a review released on Tuesday.

The UKSHA said that this was based on 15 studies.

"These studies add to the potential benefits of receiving a full course of the COVID-19 vaccination," head of immunisation at UKHSA, Dr Mary Ramsay said.

Britain  is still reporting around 50,000 cases a day. The UKHSA said that around 2 percent of the UK population had reported symptoms of long COVID which include fatigue, memory loss and general brain fog.

The Emergencies Act allows the federal government to bar people from gathering in specific locations.

Trudeau vowed it would be time-limited and only apply to specific geographic regions.

The Centers for Disease Control and Prevention in the United States has advised against travel to six countries and territories, including South Korea, Azerbaijan and Belarus, due to widespread COVID-19 infections.

In total, the CDC has listed about 140 countries and territories at the highest warning level, including Canada, Europe and almost all of Latin America.

New South Wales has reported its first omicron fatality with the death of an elderly man. Hong Kong authorities have suspended Korean Air flights. DW has the latest.