The Constitutional Court will rule this Friday on a petition by opposition candidate Nelson Chamisa that Zimbabwe's July presidential election was fixed. The election was the first since Robert Mugabe was ousted. 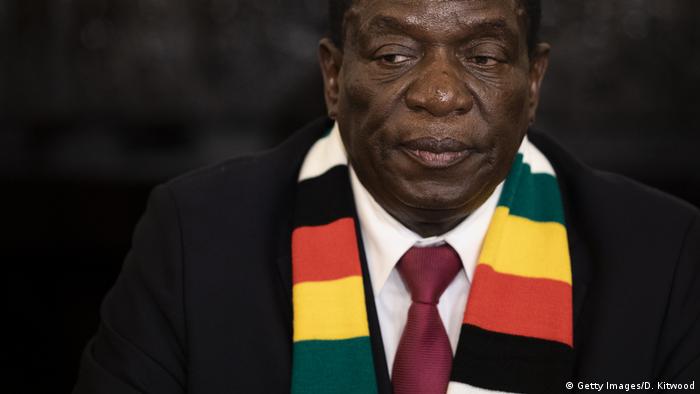 Zimbabwe's Constitutional Court on Wednesday decided to delay a ruling until Friday on a petition filed by opposition candidate Nelson Chamisa that July's presidential election was rigged.

After 10 hours of arguments on Wednesday from lawyers representing Chamisa, incumbent President Emmerson Mnangagwa and the Zimbabwe Electoral Commission (ZEC), Chief Justice Luke Malaba said the decision would be delayed.

Read more: Opinion: Zimbabwe opposition has to go back to the drawing board

Police had closed down key roads in the city center in expectation of protests from supporters of Chamisa's Movement for Democratic Change (MDC), with the ruling originally anticipated to be handed down on Wednesday.

In the July 30 election Chamisa lost the election against Mnangagwa, who won with 50.8 percent of the vote, while Chamisa got 44.3 percent.

The opposition has said the ZEC is guilty of "gross mathematical errors" and wants a fresh election.

It claims the commission increased Mnangagwa's figures via double counts and "ghost" polling stations. "It's like a kid was playing with the figures," a lawyer for the opposition, Thabani Mpofu, told the court, adding that 16 polling stations had identical results.

Malaba asked the opposition to provide the original election result forms to back up their allegations. "We cannot act on generalities," he said.

Mnangagwa's inauguration, originally scheduled for early August, was delayed as a result of the case.

Whoever is awarded the mandate to govern Zimbabwe by the court hearing the opposition's legal challenge to the ruling party's election victory faces the daunting task of turning a crippled economy around. (22.08.2018)

Kenyans wait for presidential election official results +++ Guinea's situation after the dissolution of the opposition +++Widow of the Nigerian man who was beaten to death in Italy +++ The stubborn xenophobia in S.African society +++ Starmakers Intv. Octopizzo, Kenyan hip-hop star

Kenyan voters head to the polls on Tuesday, with the high cost of living a pressing issue for the electorate. The global economic downturn is having a negative impact on the country and the wider African continent.