The announcement came after clashes between opposition protesters and soldiers in Harare left at least six people dead on Thursday. The unrest marred what had been billed as an important milestone in Zimbabwe's efforts to return to democracy following 37 years of repression under longtime leader Robert Mugabe.

In a press conference on Friday, Mnangagwa said there would be an independent investigation into the post-election violence. He also called on the opposition to help him bring about peace and unity, declaring that he would serve all Zimbabweans, including those who didn't vote for him.

"Here was a celebration of Zimbabwean democracy, a festival of unfettered freedom. With the eyes of the world on us we delivered a free, fair and credible election," he said.

Mnangagwa, 75, won 50.8 percent of the vote, ahead of Nelson Chamisa of the opposition Movement for Democratic Change (MDC) party with 44.3 percent, the Zimbabwe Electoral Commission (ZEC) said.

Chamisa, 40, has dismissed what he called "unverified fake results," and said the MDC planned to challenge the outcome of the "rigged" election.

But the ZANU-PF youth spokesman, Tonderai Bosha, told DW on Friday that the opposition would not accept an election loss.

"The opposition is saying we rigged the election. That has been the narrative during the campaigns, before the elections," Tonderai said in Harare. "What they only wanted was victory on their side. If it's victory on ZANU-PF side, it's not victory."

After the first four of 10 provincial results, Chamisa's MDC had a lead of about 50,000 votes over the ruling ZANU-PF. But after the fifth province was announced, the lead had switched to Mnangagwa. He quickly took to Twitter to hail what he called "a new beginning."

To become president, a candidate has to take more than 50 percent of the vote. Chamisa did well in urban areas, but Mnangagwa outperformed him among rural voters.

Chamisa said police raided opposition headquarters in Harare and seized computers. The search warrant indicated they were looking for unlicensed firearms, grenades and stones. Police said 16 people in the offices were arrested.

The opposition indicated it would challenge the result in the courts. "What they have been trying to do of late is to play around," Chamisa told reporters hours before the final results. "That is rigging, that is manipulation, trying to bastardize the result, and that we will not allow." 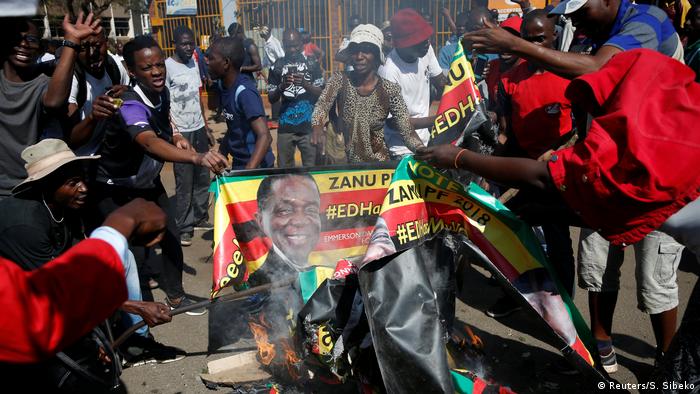 Other results announced by the electoral commission:

Protestors clash with soldiers in Zimbabwe

Elmar Brok, chief observer for the EU's election monitor mission in Zimbabwe, told DW that the vote was marred by a "lot of shortcomings in favor of the ruling party," including through "financing, state media, intimidation, especially in the countryside."

Late Friday, the US said it was reviewing the election results.

"The United States will continue to review the data collected by its own observation teams, by international observation missions and by local observers to make a complete assessment of the overall election," the State Department said in a statement.

It urged all sides to act peacefully and called on the political parties "to show magnanimity in victory and graciousness in defeat."

Turning the page: This week's elections were seen as an important step in Zimbabwe's efforts to break with the repressive rule of Robert Mugabe, who was ousted from power last year. Despite reports that the vote had gone off peacefully, international observers voiced concerns about irregularities and a lack of trust in the polling process. Officials also criticized the delay in announcing the results of the presidential race, saying it had undermined the vote's credibility.

There is now the challenging task of uniting the country and reviving an economy that's been badly battered by years of international isolation.

Post-Mugabe vote: Under Mugabe, 94, the country went from being a prosperous economy to a pariah state wrecked by mismanagement and corruption. Elections during his rule were largely marked by repression and fraud allegations. His successor, Mnangagwa, had promised a free and fair vote, inviting EU observers for the first time since 2002.

Who is Emmerson Mnangagwa? Mugabe's former deputy president and right-hand man was the clear favorite to win the presidential race. Sometimes dubbed "The Crocodile" for his ruthlessness during his years as Mugabe's state security chief, Mnangagwa has tried to cast himself as a forward-looking reformer.

Following independence in 1980, he allegedly was partially responsible for a brutal crackdown on opposition supporters that claimed thousands of lives in Matabeleland. The ZANU-PF veteran was also allegedly involved in deadly violence against the opposition during the 2008 elections.

Zimbabweans are still waiting to hear who will be the country's next president. DW's Privilege Musvanhiri has compiled these election takeaways. (01.08.2018)

Zimbabwe's new opposition leader Nelson Chamisa is 40 years old and he intends to run against President Mnangagwa on a youth ticket. DW's Privilege Musvanhiri asked him how he plans to lead the party. (08.03.2018)