Two disinfection firms in the Netherlands have been found liable for a 2017 food scandal that swept across Europe. Eggs were contaminated with the insecticide fipronil, which saw millions of chickens slaughtered. 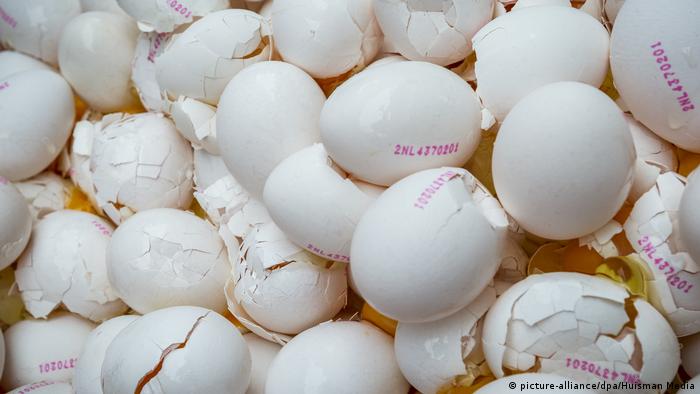 A court in the Netherlands on Wednesday found two disinfection companies liable for a tainted egg scandal that caused tens of millions of euros in damages. The Arhnem court said the firms had failed to fulfil contractual agreements to poultry farmers who took them to court.

The judgment comes more than two-and-a-half years after the food scare, which caused millions of eggs to be pulled from shelves and led to more than three million chickens being slaughtered.

The companies, Chickfriend and Chickclean, supplied farmers in the Netherlands and Belgium with a disinfectant they claimed was natural. The AFP news agency reported that farmers were duped into believing that the mixture — intended to control red mites — was based on eucalyptus and menthol.

In fact, the treatment was a pesticide known as Dega-16 which contained fipronil — a broad-spectrum insecticide commonly used to rid livestock of fleas, lice and ticks. Fipronil is banned from use in the food industry in the European Union, as it can damage the human kidney, liver and thyroid gland.

Some 120 poultry farmers took the owners of Chickfriend and Chickclean to court for damages in the wake of the scare, which saw millions of eggs withdrawn from supermarket shelves and more than three million chickens slaughtered.

"Based on a large number of pieces of evidence, the court assumes that the owners knew that Dega-16 contained fipronil and that its use for the control of red mite was prohibited," the legal website de Rechtspraak cited from the court ruling.

The damage to poultry farmers "is as a result of Chickfriend and Chickclean's use of fipronil," the court said.

Two Chickfriend and Chickclean executives were also arrested in August 2017 and were later released pending trial. The fipronil scare affected 25 countries in Europe, and the scare reached as far as Hong Kong.

The German government has recalled thousands of eggs contaminated with the chemical fipronil. The news comes less than a year after the insecticide found its way into millions of eggs in the Netherlands. (12.06.2018)

A Belgian town has continued its tradition of making a giant 10,000-egg omelet, defying the ongoing egg scandal. The city of Malmedy says it made sure it sourced healthy eggs. (16.08.2017)