EU politicians plan to boycott this summer's soccer championships in Poland and Ukraine over the latter's treatment of opposition members. But how will Ukrainian hooligans react to the influx of foreign visitors? 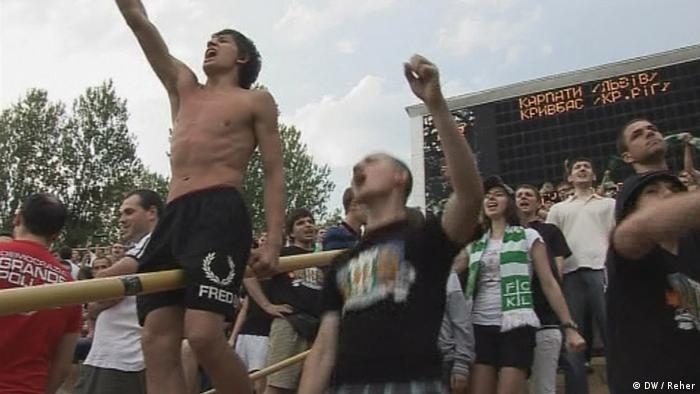 Standing in the local football stadium, the fans of Karpaty Lviv cheer their team on. Igor Babjak and Oles Sigal never miss a game here. Karpaty is in the Ukrainian premier league and represents the western town of Lviv.

Fans here have the reputation of being nationalist thugs. But Igor Babjak says they don't start fights - they're just giving their team support. "As far as other fans go", he says, "I can only say, if they don't provoke us, everything'll be fine."

'A player has to live where he plays' 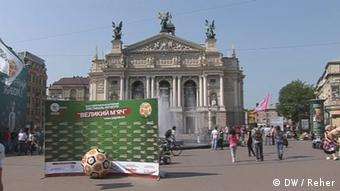 Extremists in Lviv say foreigners aren't really welcome at this summer's European championships. If they had foreign players on their own club, they'd send them back home if they could. "A player has to live where he plays," believes Oles Sigal. "He's got to understand the traditions and history of the country. You can't play for a club if you don't know who you're actually playing for."

Karpaty Lviv protects its players well from its nationalist fans. A year and a half ago, Danilo Avelar came from Brazil with hopes that playing for Karpaty would help him make his way onto one of Europe's top teams. Avelar says he hasn't heard of nationalist fans and hopes it isn't true. "Every game they speak with us and wish us a good game. I think that these rumors of nationalism are not true."

The city Lviv is planning to hold a huge party for tens of thousands of fans from Germany, Denmark and Portugal during the Euro 2012. The German national team is due to play its tournament opener in a brand new stadium just outside the city. Workers are still hurrying to finish the venue. Inside, police and rescue workers are holding drills to prepare them in the event of violence between fans. 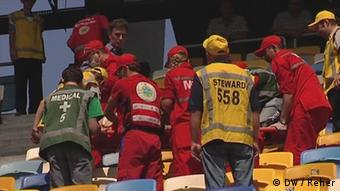 The authorities don't expect trouble, after having analyzed all the different movements within the fan groups. "I can tell everyone from the media, and I hope Europeans are listening", says Michail Kurotshka, the person in charge of security, "The security forces in Lviv are ready."

But there have been problems in the past with violent fans in Lviv. Two years ago, there was a riot in Lviv's historic old town when ultranationalist Karpaty fans clashed with supporters of the German side Borussia Dortmund. It took the police hours to get the situation under control. Both Ukrainian and German fans were injured. 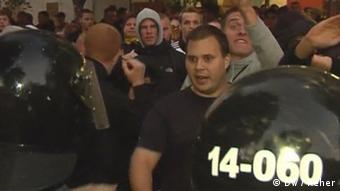 If no one provokes us there's no problem, says Igor Babjak

Now, when visiting fans come in from abroad, the police are out in force. More than 40,000 officers will be on hand to prevent rioting this summer. Police also have lists of names of foreign fans who are known to be violent. They won't be allowed into the country.

Lviv mayor Andrij Sadowij wants to present his town as an open, up-and-coming European city. "Fans are the same everywhere, whether it's in England, Germany or Ukraine", he says. " They're people who are passionate about their clubs and respect their foreign guests. I can't remember any major incidents in Ukraine."

Now is not a convenient time for racist Ukrainian football fans to come into the limelight. The leaders of Ukraine are already making negative headlines for their treatment of opposition leader Yulia Tymoshenko. Many foreign guests are refusing to attend the tournament in protest.

A football tournament shouldn't be influenced by politics at all, says Karpaty Lviv fan Igor Babjak. "And absolutely not by the Tymoshenko case." Sports and politics, Babjak adds, have nothing to do with each other. 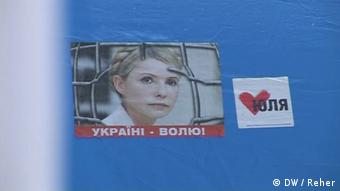 But Tymoschenko supporters say that extreme right, xenophobic fans like those of Karpaty Lviv have long used sporting events to spread ultra-nationalist sentiment, and that now, even the teams themselves are afraid of the riots.

"That many of the teams aren't staying in Lviv says a great deal about the situation", says Roman Ilyk, a political activist. "Many of the fans who want to come are having huge difficulties with finding places to stay." Ilyk sees this as an indication that something is wrong in Ukraine.

In fact, many are saying Ukraine isn't ready to hold an event like Euro 2012 at all. Political despotism and intolerance have forced sport off center stage.

The EU sees Yulia Tymoshenko as a victim of political justice in Ukraine. But EU parliamentarians fail to agree on how to react. Should they boycott the European football championship? (23.05.2012)

A Ukrainian appeals court has abruptly postponed its review of the abuse-of-office conviction against former premier Yulia Tymoshenko. Her legal team says it will now take her case to the European Court of Human Rights. (15.05.2012)

The European Union has put on ice an agreement meant to increase political and economic ties with Ukraine. The move comes in response to deep concerns about the state of human rights in the former Soviet republic. (14.05.2012)