India is the world's largest democracy, but does it live up to that promise? Tim Sebastian meets Indian MP Shashi Tharoor on Conflict Zone.

"There isn't a single crime or misbehavior even in Kashmir that hasn't first been exposed by an Indian individual by an Indian person or authority, by an Indian media person or an Indian NGO," MP Shashi Tharoor has told DW in an exclusive interview on Conflict Zone.

"Indians are the first to bring these up. It's impossible to hide wrongdoings in Kashmir," he said. The Kashmir conflict has divided India and Pakistan since 1947. India's partition led to the formation of India and Pakistan. They have fought two wars over the territory, and Kashmir remains one of the most militarized zones in the world.

When Conflict Zone host Tim Sebastian confronted Tharoor, an MP for the Indian National Congress (INC) party, over the discovery of mass graves in Kashmir, he responded: "Sadly, one of the realities in Kashmir is that the armed forces and the authorities are blamed for a number of the actions undertaken by terrorists. People are too scared to blame the terrorists because they fear for their own lives." 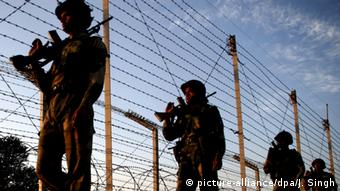 The Kashmir conflict has divided India and Pakistan for six decades.

100 percent of Indian MPs under the age of thirty are from families with a political background, while 65 percent of members in the 31-40 age group are "hereditary" MPs, British writer Patrick French found in 2012. The Indian upper class is "dominated by family cartels, who plant their own over the rest," the New York Times wrote.

Tharoor, who has served as an MP for Thiruvananthapuram, Kerala since 2009, admitted the deep roots of dynasty politics in Indian culture: "It's going on in pretty much every party, so that it's very difficult to single one out and say 'You shouldn't be doing this'. What I have discovered about Indian politics, having entered it, is that a great deal of what you and I might consider to be not the best democratic practice is so deeply entrenched in our culture that it has infected our politics as well."

He added: "The fact that families invade this profession too does not objectively seem ideal, but it’s rampant throughout all of Indian society." Nepotism doesn't just affect politics; all the top actors in mainstream cinema are children of former film makers, directors and actors. Making it to the top without having an influential family is almost impossible.

"We cannot remain silent about corruption"

Transparency International ranked India 79 out of 176 in its 2016 report: "India’s ongoing poor performance with a score of 40 reiterates the state’s inability to effectively deal with petty corruption as well as large-scale corruption scandals. The impact of corruption on poverty, illiteracy and police brutality shows that not only the economy is growing – but also inequality."

Tharoor called on the public to not "remain silent about political corruption and talk about black money as if it is only coming out of real estate transactions and things like that. It's coming out of politics, too." Eliminating black money from the system has been particularly high on Prime Minister Narendra Modi's agenda.

Shashi Tharoor's INC party has a worse record on financial transparency than the opposition Bharatiya Janata Party (BJP). During 2004-05 and 2014-15, 83 percent of the party's total income came from unknown sources compared to 65 percent of the BJP's.

Tharoor acknowledged that this "needs to change" but also emphasized: "Everybody else is doing it." Asked whether it's okay to break the rules because everybody else does too, he said: "No, I think it’s important to amend the rules and be realistic about them. We really have to raise the legal expense limits that people would actually be able to legally raise and spend accountable funds that are actually reasonable to reach." 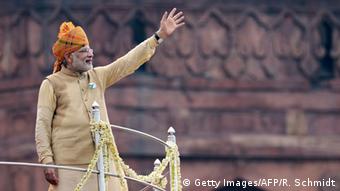 But he also defended his strategy and said if a politician isn't able to reach their two million voters, "you will not be successful in politics, so you have to reach them by whatever means you can, with whatever help you can get. Unfortunately, very often this has implied people doing corrupt things, raising unaccounted money or what is called black money, money on which taxes haven’t been paid and which has not been declared in your election expense returns."

Tharoor's Congress party - the party of the Gandhi dynasty - was handed its worst-ever national defeat last year, after being reduced to just 44 (out of 543) seats in parliament in May 2016. Since then, the party has gone on losing. Does India's grand old Congress party deserve to survive? Find out now on Conflict Zone.

How free is Pakistan-administered Kashmir?

Polling has begun in Pakistan-administered Kashmir with violence on the Indian side dominating the political discourse. In a DW interview, Arif Jamal points to a lack of political freedom in Pakistani Kashmir. (21.07.2016)

The New York Times: Across India, Nepotism as a Way of Life