Coronavirus: US workers fear for their jobs and their health | Americas | North and South American news impacting on Europe | DW | 24.05.2020

Coronavirus: US workers fear for their jobs and their health

US workers are struggling to defend themselves against employers who are not doing enough to protect them from COVID-19. Now there's additional pressure from states who are lifting their stay-at-home orders. 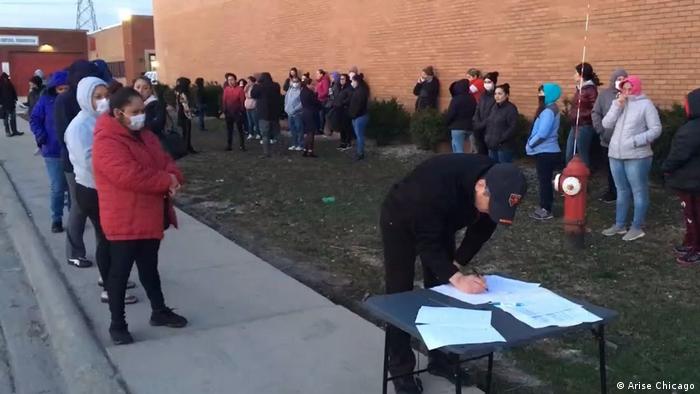 Arise Chicago has never received so many calls and messages. "We are contacted by about 160 workers per week," says Shelly Ruzicka.

She's the spokeswoman for the group that's fighting for workplace protection and fairness in the state of Illinois in the Midwest. Given how weak unions are in the US, private groups like hers and NGOs often take on their traditional role. According to the Department of Labor, only 6.2% of workers in the private sector were organized in unions in 2019.

In the past, says Ruzicka, people mostly asked for help when their employer was not paying their wages. Since the outbreak of COVID-19, the inquiries have been very different.

In March, workers were asking about reduced hours and furloughs, then people would get in touch about whether their workplace, say a nail salon, was actually essential or if it should be closed.

Now, workers fear for their lives. "People are scared. Especially when they're working close together, if they're not being provided with masks or other personal protective equipment, or if there unable to wash their hands," says Ruzicka. In those cases, Arise Chicago helps to organize strikes, formulate demands or starts the paperwork needed to create a union. The organization also reports law violations to the authorities.

Ruzicka says their efforts were starting to generate results. In a suburb of Chicago, the employees at Raymundo's, a company that produces flan and pudding, came together after colleagues were tested positive for COVID-19. The remaining workers stayed home and put together a list of demands. "At the company they're now taking workers' temperatures daily. They're marking the floor to ensure that workers stay six feet (1.80 meters) apart, making sure there are hand wash supplies and breaks to do so, and they're supplying masks to workers," Ruzicka says.

A wave of walkouts

Protests by workers in numerous US states have been rather low-key, such as staying at home and coordinating walkouts. Since early March, the Payday Report website, run by journalist Mike Elk, has been compiling data on strikes across the country and has documented over 200 events. Most of those took place on May 1, International Workers' Day. Workers from major supermarket and department store chains such as Target, Walmart and Whole Foods called in sick or walked out. Drivers for the ride-hailing company Uber formed a protest caravan in San Francisco, while Amazon and FedEx employees refused to work. 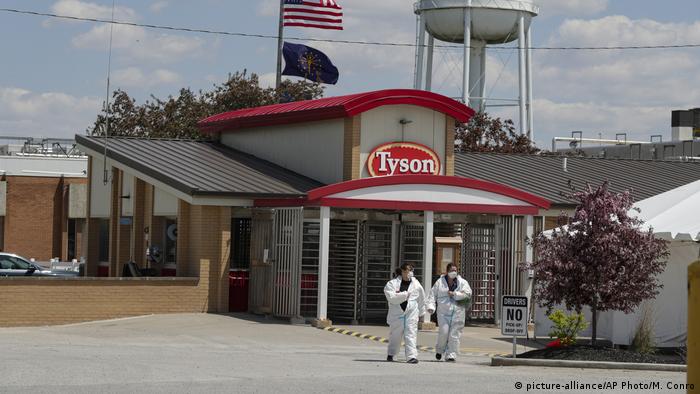 Food production companies have become the epicenter of the coronavirus-related scandals. Tyson beef plant, in Washington State, says it produces enough beef for four million consumers per day at the Wallula plant alone. Around 1,400 people work there.

On March 23, the state issued a stay-at-home order for all residents. Tyson, however, is considered an essential business based on the federal government's recommendation and remained open. About three weeks later, six people fell ill with COVID-19. All were connected to the meat supplier.

A company spokesperson confirmed to local media that more and more workers were staying away. Guadalupe Olivera, a Tyson employee, died from COVID-19. On April 23, Tyson closed the plant. According to the local authorities, 2,236 tests were carried out on employees in three stages — 316 came back positive.

Production has since started up again. On their website, Tyson says that the safety measures have been approved. But employees still didn't feel safe, a group of relatives and friends — the Friends of Tyson Workers — confirmed in an email to DW.

"Some improvements have been made but there is still a lot to do. The issue of transparency and an honest attempt to support workers is still missing. The cafeteria is closed but now people are eating in the locker room, as there is nowhere else. Tyson says they aren't having supervisors call sick workers but that's just false. We know many workers who are being contacted and pressured by Tyson." An online petition by the group is asking for paid sick leave, free COVID-19 tests, communication of safety guidelines in 10 languages and child care. 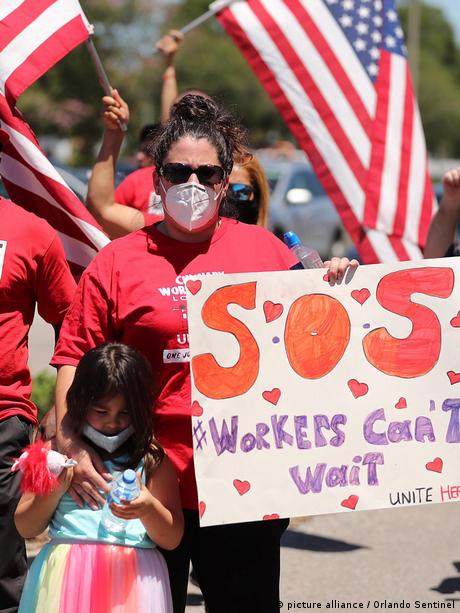 Without unions to help them, workers are often left to fend for themselves

The situation in Wallula is not an isolated case. After receiving a number of complaints, the Centers for Disease Control and Prevention (CDC) in April gathered data from 19 states. On May 1 they released a report about the conditions at 115 meat production sites. According to the CDC "COVID-19 was diagnosed in 4,913 workers, and 20 COVID-19–related deaths were reported."

The meat and poultry processing industry employs approximately 500,000 people. Therefore it's no surprise that the struggle over working conditions has reached Washington, DC. Colorado Senator Michael Bennett is one of many politicians asking for support for employees at JBS and other food processing companies in his region. In a letter to Vice President Mike Pence on May 13, he repeated his request that production facilities should only be allowed to be open if the safety of employees was guaranteed. He also inquired about the delivery of protective equipment.

President Donald Trump on the other hand has been pushing for weeks to reopen the country and get the economy going again as soon as possible. And he is not alone. Protests against the lockdown have been growing. Late last month, demonstrators, some of them armed, stormed the state capitol building of Michigan. And last week in New York around 200 business owners protested against the stay-at-home order.