The US health regulator has approved the second at-home oral treatment for the coronavirus. A similar treatment from Pfizer was approved a day earlier. 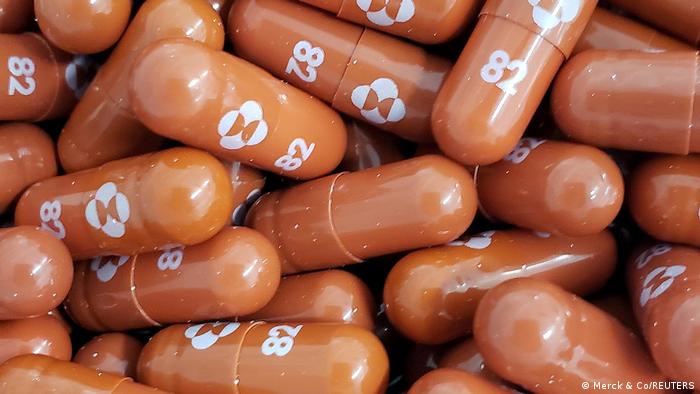 The US Food and Drug Administrator approved Merck's COVID-19 treatment on Thursday.

It will be the second at-home oral treatment available to US citizens.

It comes after it gave the go-ahead for a similar treatment from Pfizer Inc. a day earlier.

Merck’s drug molnupiravir, developed with Ridgeback Biotherapeutics, inserts tiny errors into the virus’s genetic code to stop it from reducing. This has sparked concerns that the drug could spur the virus to mutate into more virulent strains.

The drug targets part of the virus known as RNA polymerase, which has not changed much in the omicron variant.

The approval provides another easy-to-use medication to battle the rising tide of infections. The ,olnupiravir drug is already authorized for use in the UK.It is still under review in the European Union.

Molnupiravir not as efficiant as paxlovid

US federal regulators only authorized Merck's drug for adults with early symptoms of COVID-19 who are most vulnerable to severe disease.

Pregnant women should not use molnupiravir according to the FDA.

Men and women were also instructed to use contraception during and after the treatment.

"Molnupiravir is limited to situations where other FDA-authorized treatments for COVID-19 are inaccessible or are not clinically appropriate and will be a useful treatment option for some patients with COVID-19 at high risk of hospitalization or death,” said Patrizia Cavazzoni, director of the FDA’s Center for Drug Evaluation and Research.

Authorities could soon grant emergency use for the first at-home treatment for Americans. However, concerns over potential side effects remain.