Unmarried partners of German residents in many non-EU countries have not been allowed to visit their loved ones since March. But pressure from the EU and an online campaign caused Germany to change course. 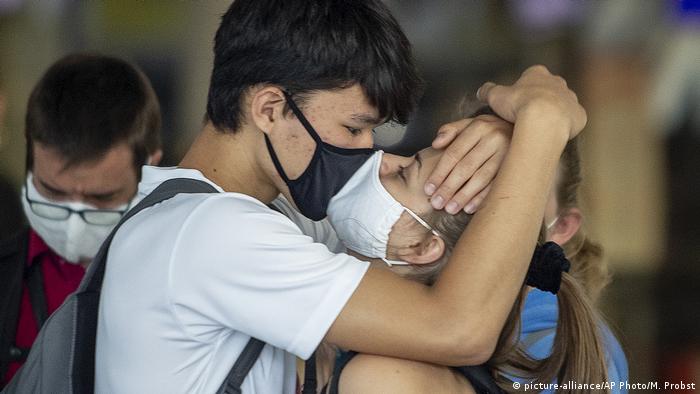 As of Monday, unmarried partners of German residents can once again enter the country from non-EU states — on the condition that couples can prove they are in a long-term relationship.

Following pressure from the European Commission, Germany announced on Friday it would allow in visitors from a list of "third countries."

Unmarried partners from a separate list of "high-risk" regions and countries may also enter, but have to undergo mandatory testing and quarantine until they have a negative test. Countries on the high-risk list include the United States, Turkey and Iran.

Proof of the relationship can come in the form of a previous joint residence abroad or a documented previous in-person meeting in Germany.

The partner living in Germany also must provide a formal visit invitation and the couple must sign a joint declaration affirming the existence of their relationship.

State regulations should be considered

Additionally, each German state may have separate rules to do with quarantining and compulsory testing that may apply to arrivals from non-EU "third countries." A spokesman for the German Interior Ministry told DW on Saturday that travelers should check the official measures of the specific German state they plan to visit ahead of their arrival — and ensure compliance.

"I am delighted that we are now able to make this work within a European framework," German Interior Minister Horst Seehofer wrote on Twitter.

Most non-European Union borders have been closed to non-EU travelers since March, with exceptions made for essential workers and those married to EU residents.

Read more: Coronavirus digest: Travelers to Germany must be tested or face €25,000 fine

'Love is not tourism'

Friday's decision came shortly after the European Union launched a fresh appeal for member states to allow so-called sweetheart visas for unmarried partners of EU residents to enter the country.

According to the "Love is not tourism" movement, an online campaign that called on the EU to act, only eight European countries have so far allowed these partners in. Denmark and the Netherlands were among the first to pave the way for unmarried partners to visit their partners.

Proponents of the cause will hope that Germany, one of the bloc's biggest countries and the current holder of the EU Council's presidency, will set an example for other countries.

Compulsory testing, quarantines and bans on non-essential travel are in place for travelers to Germany from many non-EU regions, regardless of their nationality or reason for travel.

Germany requires coronavirus tests for arrivals — what you need to know

In Mexico, macho men still dominate people’s love lives. In the traditional world view of many men, women should defer to men’s will in every respect. But the younger generation is starting to fight back, with success.