Binational couples separated by COVID-19 want nothing more than to quarantine together. Using hashtags like #LoveIsNotTourism, some of them are campaigning to have reunifications considered essential travel. 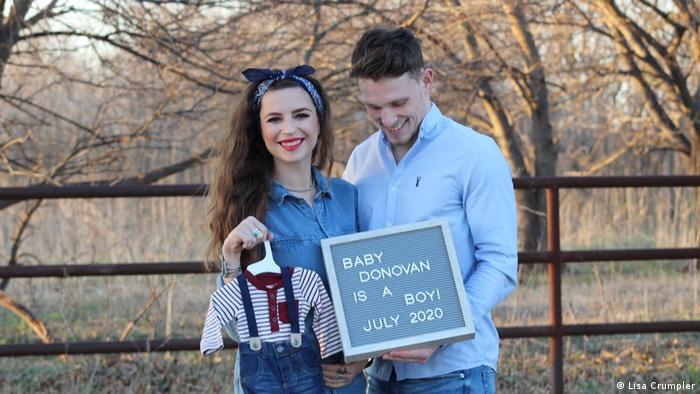 Deep in the Texan Bible Belt, Corsi Crumpler can't believe she could go play slots at a casino or throw back a few brews at a bar, but she can't have her baby's father hold her hand as she gives birth.

The 28-year-old silversmith never meant to become a social activist. Based on the paperwork her attorney filed for her Irish fiancé in February, Crumpler was planning for a dreamy summer: a wedding, a new home together and the arrival of their baby, already named Taos for their shared love of the picturesque New Mexico town.

But the coronavirus pandemic took that all away when American and European borders were closed in March, leaving husband-to-be Sean Donovan helplessly stuck in Dublin.

"I can't even put into words what the stress of all this has done to me," the 39-week-pregnant Crumpler says. "I didn't anticipate that, five months later, my fiancé would not have been able to feel the baby kick one time, to help me put together the baby's crib, the baby's room ... to do all the things that come along with becoming parents for the first time ever."

Her fear of the virus as US infection rates continue to climb is one thing, she says, but watching the Trump administration repeatedly reject the notion of travel exemptions for long-term couples — while allowing them for athletes, for example — brings added agony. Crumpler says she's been blocked at every turn, even hung up on by a consular official, just trying to get information on Donovan's immigration status. So now, she spends her final days before heading to the hospital pointing out on social media what she feels is the height of government hypocrisy over "family values."

Crumpler and Donovan are just one of many thousands of couples all over the world who are in this situation and increasingly organizing online with petitions demanding their governments classify their trips to reunite as "essential travel" allowed under current restrictions. They're using the hashtags #LoveIsEssential and #LoveIsNotTourism, pledging to provide negative coronavirus tests at their own expense both on departure and arrival, to wear masks in airports and planes, to go straight into quarantine and stay home with their loved ones.

That's the kind of system set up now by Denmark, the first country to implement a "sweetheart" exemption. 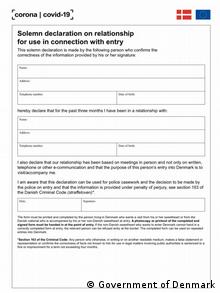 The Danish government offers this privilege for non-EU residents if they have been in a relationship with a Danish resident for a "certain period, normally three months" and have "met regularly in person." The government website warns, however, that "sweethearts whose relationship has been based merely on written and telephone contact are not deemed to have a worthy purpose under the current entry restrictions."

Within the last week Austria and Norway have followed suit.

Undeterred and hoping Germany will #DoItLikeDenmark, as another hashtag urges, computer programmer Sascha Sommer has gathered photos, web chats, videos, plane tickets and other proof of his love affair with New York schoolteacher Zuri Ferguson in preparation for presenting it to authorities for an exemption.

"We have family members that can prove that we were in a relationship," Sommer affirms, dismissing any sense of an invasion of privacy. "I would do anything — almost anything — to reunite with her again and just to see it through together." 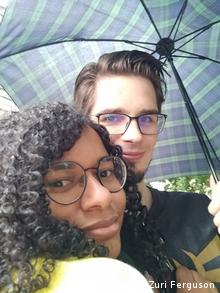 That "almost anything" is more than just a small thing for Sommer and Ferguson. He has a heart condition that puts him in a high-risk category, so traveling to meet up in one of the countries, such as Croatia or Ireland, that are allowing in American citizens, is out of the question.

Their prospects for a reunification on German soil got a bit brighter on Tuesday with the help of German member of the European Parliament Moritz Körner, who has taken up the cause of the split sweethearts, writing personally to the heads of each EU government to encourage exemptions. It's not only that he is "still believing in love," he tells DW, but that he believes Copenhagen has set a common-sense example. "I don't see that Denmark is overwhelmed by all the coronavirus these loving couples bring into the country," he says.

That's why on Monday, with his speaking time allotted in the parliament's civil liberties committee meeting, Körner put German Interior Minister Horst Seehofer on the spot.

Despite German government officials having previously said the process of checking couples' statuses would be too difficult, Seehofer now said he is sure a "sensible solution" can be found.

Körner says he'll follow up on the practical progress in coming days and hopes this will be a turning point for the movement, with Germany serving as the EU's rotating president until the end of the year. "If the German [EU] presidency really tackled this," he said, "other countries would of course follow it."

Zuri Ferguson isn't quite packing her bags yet in New York City, but she says she is encouraged about Seehofer's public response. She's just finished up sending emails about their case to more than 250 German parliamentarians individually.

But it's almost certain nothing is going to happen soon enough to comfort Corsi Crumpler. While Ireland has now decided to admit even American tourists, Washington shows no sign of reciprocating for unmarried couples, regardless of their circumstances. And, she reports, baby Taos is starting to signal he can't wait any longer for his father to arrive.

Greece has come through the coronavirus pandemic relatively unscathed. Athens now hopes to welcome back vacationers, but increasingly foreigners are looking to pick up a home or investment property under the sun. (14.07.2020)