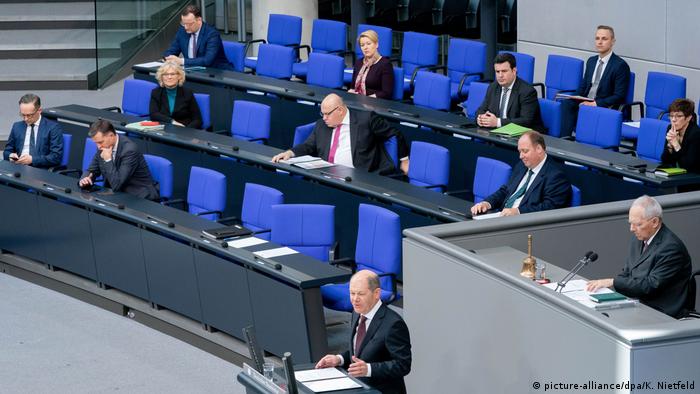 Germany's lower house of parliament has approved a €750 billion ($814 billion) aid package on Wednesday to cushion the economy from the direct impact of the coronavirus outbreak.

In order to fund the emergency measures, Chancellor Angela Merkel's government is planning to take on new debt for the first time since 2013.

The debt ceiling, which is anchored in German law and limits annual government borrowing, was also suspended in a separate vote on Wednesday. It means the government can take on another €156 billion in 2020 as part of the aid package.

The special coronavirus spending plans received broad support in the Bundestag. Only the far-right populist Alternative for Germany party abstained. The measures will now move on to the upper house of the parliament, the Bundesrat, and are expected to be voted into law on Friday.

What are lawmakers saying?

At the start of the debate in parliament, Finance Minister Olaf Scholz had stressed that the government was doing everything in its power to mitigate the damage and protect jobs, businesses and the health sector.

"There's no script for this," Scholz told lawmakers, who were sitting in the chamber with 1.5-meter gaps between them, as required under new social distancing rules.

"We are experiencing a crisis that is unprecedented in the Federal Republic of Germany," he said. "What we need now is solidarity."

Justice Minister Christine Lambrecht told Germany's Handelsblatt newspaper that she would support nationalizing companies to protect them from bankruptcy.

"It is vital that we protect the economic structure of our country during the crisis and prevent the sale or break-up of important companies," she said. "The state is prepared to acquire full or partial stakes in companies, should it become necessary."

What is the situation in Germany?

Germany — Europe's biggest economy — has stopped short of implementing the kind of nationwide lockdown seen in other countries, but it has banned gatherings of more than two people and imposed stricter social distancing rules.

Germans are still allowed to go to work and exercise outside, provided they maintain at least a 1.5-meter distance from others.

They're also the rules that led to an unusual outfitting of the Bundestag chamber. 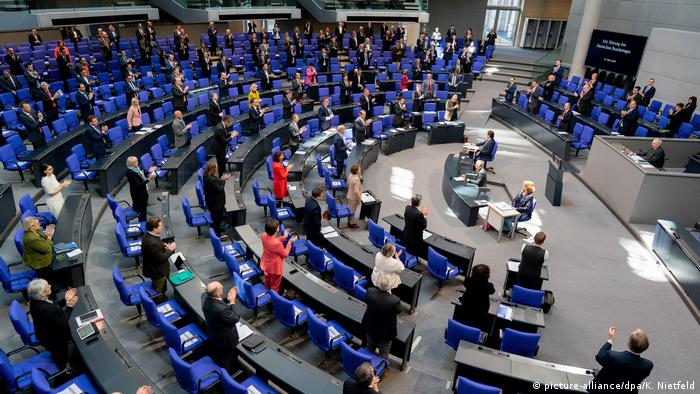 Lawmakers were spread out and without Chancellor Merkel during the debate

Scholz was leading the session in the absence of German Chancellor Angela Merkel, who is in precautionary self-isolation after contact with a doctor who later tested positive for COVID-19. As DW's political correspondent Kate Brady explained, this was just one of the extraordinary measures in place for Wednesday's debate.

"Only every third seat in parliament is being taken today," Brady said. "Many MPs are upstairs watching the parliamentary debate from their offices right now and will come down later to cast their ballots in voting boxes that won't actually be on the floor in the assembly, but rather outside. There are also a lot of other MPs absent today, either suffering from the coronavirus or in self-quarantine."

In Germany, nonessential shops and services have also been ordered to shut. Restaurants and cafes can only offer food delivery or take away. These measures are expected to remain in place until April 6.

Schools across the country will remain closed until the Easter holidays end on April 24.

The coronavirus pandemic has led to widespread fears of a global recession. Germany's measures come after similar moves by other countries to limit the economic fallout.

In the US, lawmakers have agreed to a stimulus deal worth $2 trillion (€1.85 trillion) to help aid workers, businesses and the healthcare system.

France has announced a €45 billion aid package to help businesses and workers, while the UK has unveiled a package of measures including €362 billion in loans and €22 billion in other aid to shore up the economy.

The International Olympic Committee (IOC), has confirmed that the 2020 Summer Olympics in Tokyo have been postponed for a year after IOC President Thomas Bach agreed to a request from Japanese Prime Minister Shinzo Abe. (24.03.2020)

German Health Minister Karl Lauterbach has said everyone should consider a second booster shot as the number of coronavirus infections and people in intensive care increases.

The massive multitrillion-yen package, including cash handouts and aid to businesses, is expected to help support the recovery of Asia's second-biggest economy.

German Chancellor Olaf Scholz has delivered a statement to the German parliament ahead of an EU summit on the war in Ukraine. Scholz described the war in Ukraine as the greatest crisis facing the EU in its history.