With infection rates stabilizing, German hospitals are reportedly experiencing their "first, slight relief" in the latest coronavirus wave. But many warn it is too early to celebrate. 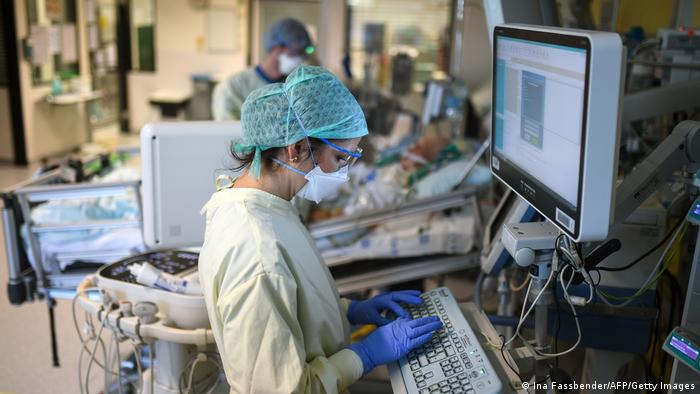 For about two weeks, new infections in Germany have remained "relatively constant," the head of the German hospital federation (DKG) told the mass-circulation Bild newspaper on Sunday.

The numbers "give us confidence that we don't have to be concerned about an exponential rise in patients in need of intensive care," DKG President Gerald Gass said.

Most of the hospitals are now experiencing their "first, slight relief," Gass said, but warned that the pressure on hospitals remained very high.

What is the situation in German hospitals?

When it comes to intensive care units, the number of coronavirus patients there has been relatively constant for about 10 days, the German Interdisciplinary Association for Intensive Care and Emergency Medicine (Divi) reported on Sunday.

According to Bild, some 5,019 COVID-19 patients were currently being treated in intensive care units around Germany — compared to a peak of 5,106 on April 26.

"That looks like a very stable and and quiet situation at first glance, but the opposite is the case," DiVi President Gernot Marx said in a video statement, adding that hospitals were still receiving coronavirus patients every day.

However, Marx was quoted as saying by the Rheinische Post newspaper that he was hopeful that hospital admissions would drop by next week.

"We are confident that the number of COVID-19 patients in the intensive care units will decrease — and that is directly related to the measures taken by the federal emergency brake, as well as the significant progress in vaccination," Marx told the paper.

What is the COVID infection rate in Germany?

"We are not out of the worst yet," Susanne Johna, head of the doctors' union Marburger Bund told Rheinische Post.

What about the vaccinations?

Health officials have been hopeful that a record number of vaccinations could help turn the tide and take the load off of hospitals.

Meanwhile, the government has been looking into exempting immunized people from current restrictions.

Scholz added that he believes the new regulation has a good chance of passing Germany's legislative system by the end of the week.