Sneezing and coughing near other people is an absolute no-go in the current pandemic. But plexiglass may help protect people from the highly infectious virus, with the firm who invented it still being alive and kicking. 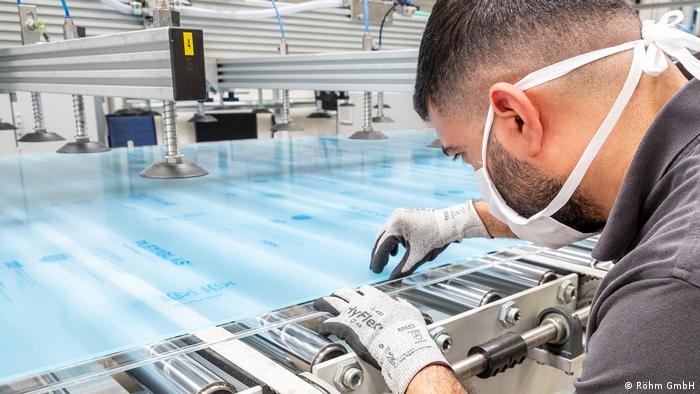 For almost a century now light, transparent and weather-resistant panels made of plexiglass have been in use virtually around the whole world. But spelling the term with a double "ss" — like in the English-speaking world —  is actually a mistake because Plexiglas is a registered German trademark (spelled with a single "s"), and goes back to Otto Röhm, a German chemist, who invented the acrylic glass in 1933.

The Röhm company founded way back in 1905 is still operating today under the name Röhm Plexiglas, with its main German production site located in Weiterstadt.

During the current COVID-19 pandemic, thermoplastic screens made in Weiterstadt are seen at supermarket tills and pharmacies all over Germany, and the phones at the firm keep ringing off the hook, says company head Michael Pack.

"Since the outbreak of the pandemic in Germany in mid-March we have been flooded with orders," the CEO told DW, adding the company is working around the clock to meet the "gigantic demand."

Production output has increased "five to 10 times" since March, as the company aims to manufacture as much Plexiglas as possible, with only little spare capacity left.

Röhm Plexiglas operates 15 production facilities worldwide, employing about 4,000 people. It's among the leading global producers of polymethyl methacrylate (PMMA) as the transparent thermoplastic is scientifically called. Business in the product was brisk even before the coronavirus crisis, although it made up only about 10% of total company revenues to the tune of  €2 billion ($2.16 billion) in 2018. 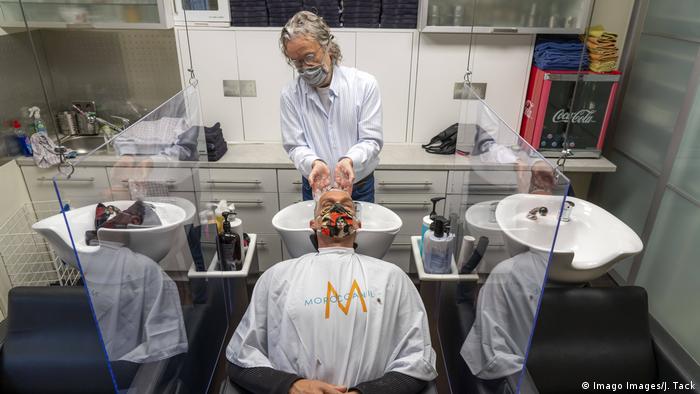 With the coronavirus pandemic in full swing, acrylic glass is in high demand almost everywhere

These days Röhm Plexiglas is probably experiencing the busiest time in the company's 115-year history, with requests coming in fast and supplies of the raw material getting increasingly stretched. But unlike other players in the manufacturing industry, which suffer from disrupted global supply chains, the company can rely on a steady stream of methyl methacrylate from its own plant in Worms — situated just 50 kilometers (31 miles) away from Weiterstadt.

"Distances are short, also keeping the carbon footprint of our logistics very low. This certainly gives us an advantage over our competitors at the moment, who have to rely on deliveries from abroad for their upstream products," says Michael Pack.

Plexiglas panels and sheeting can be found seemingly everywhere in our modern world, as they are used in the car and aerospace industries, as well as for manufacturing computer screens, traffic noise protection panels in road construction or in advertising and a lot more.

Sea world attractions around the globe use them for their aquariums, and even the UK-flag-bearing rear lights of the British MINI Cooper car are made of the thermoplastic.

Even without the virus pandemic, the outlook for manufacturers has been positive, US research firm Adroit Market Research has found.

But demand for the acrylic glass is expected to surge an annual 6% over the next five years, the analysts say, as companies scramble to protect employees from the coronavirus that is transmitted through droplets from an infected person's mouth or nose.

CEO Michael Pack expects demand to remain high in the longer term. "Since [coronavirus] restrictions are being gradually eased everywhere, with more and more shops opening again, we expect a second big wave of orders."

Touted as a simple but effective shield against infections, plexiglass barriers have become a common sight in virtually all spheres of public life where the two-meter (six-foot) social-distancing rule cannot be kept at all times.

Pack believes demand for bigger screens will be especially growing as department stores are sealing off entire payment areas to protect their cashiers, and companies are striving to keep assembly lines virus-free.

At Röhm Plexiglas, the affordable and easy-to-install screens have already been put in place to prevent infections among factory workers, while production management is mainly being done via phone to "minimize person-to-person contact." 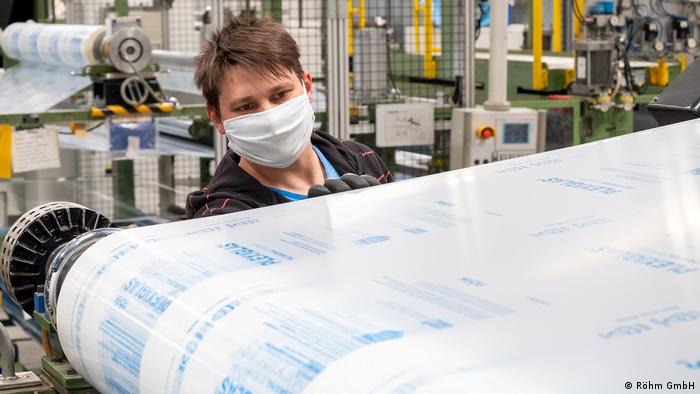 Röhm Plexiglas is owned by US private equity group Advent International, which bought out the acrylic glass business of Germany's specialty chemicals maker Evonik for €2.5 billion in early 2019.

The standalone company has a strong footing in the US and also inSouth African and Chinese markets, with locally made production guaranteeing safe supplies also in times of the global pandemic.

"Especially in the United States we are currently benefiting very much from making raw materials and upstream products in our own home-based production facilities. Our supply chains are working well over such short distances and without crossing borders," Michael Pack says, adding further food for thought in the worldwide debate about whether globalization may have gone too far.