Coronavirus digest: WHO warns of at-risk health workers in Africa

The World Health Organization has stressed the importance of vaccinating health workers in Africa. Scientists are looking into a new, highly mutated variant of the coronavirus. DW has the latest. 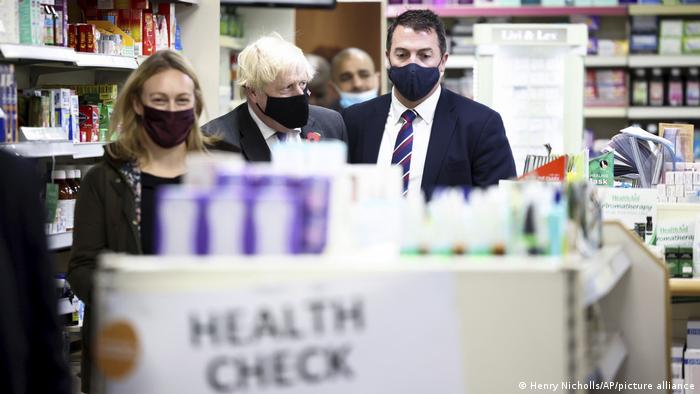 The World Helath Organizaton has warned that a majority of the continent's frontline health workers were dangerously exposed to COVID-19 and only a quarter of them had been successfully vaccinated.

"It is important to have high vaccine coverage among health workers not only for their own protection but also for their patients and to ensure health care systems keep operating during a time of extreme need," WHO's Africa director Matshidiso Moeti said.

Here is a round-up of COVID news from around the world.

The UK on Thursday expressed alarm over the newly discovered coronavirus variant spreading in South Africa.

The UK Health Security Agency said the B.1.1.529 variant contains a spike protein that differs dramatically from the one in the original coronavirus that COVID-19 vaccines are based on.

"This is the most significant variant we have encountered to date and urgent research is underway to learn more about its transmissibility, severity, and vaccine-susceptibility," UKHSA Chief Executive Jenny Harries said.

British Health Secretary Sajid Javid suggested it may impact the effectiveness of vaccines.

"And that would suggest that it may well be more transmissible and the current vaccines that we have may well be less effective."

A World Health Organization working group will meet on Friday to assess the variant and possibly assign it a name from the Greek alphabet.

"We need more contact restrictions," Merkel said, adding that she had "clearly told" chancellor-in-waiting Olaf Scholz that "we can still manage this transition period together and look at all necessary measures."

Germany reported 76,414 new cases and 357 deaths in the last 24 hours, according to data from the Robert Koch Institute (RKI). This takes the total number of infections to 5.65 million and more than 100,000 fatalities.

The seven-day incidence rate hit a fresh high of 438 new infections per 100,000 people per week, the RKI reported.

Germany's air force will transfer COVID-19 patients from overwhelmed hospitals, as the fourth wave takes its toll on the country's health system.

The air force is set to shuttle will seriously ill COVID-19 patients from the southern town of Memmingen to Muenster near Osnabrueck in the north, Reuters reported.

It marks the first time the air force has used planes fitted with up to six ICU beds, which are labelled "flying intensive care units," to transfer COVID-19 patients within Germany.

Czech President Milos Zeman returned to the hospital on Thursday hours after being released as he tested positive for COVID-19. The 77-year-old was admitted to a military hospital on October 10, a day after general elections, to be treated for liver problems.

"The president's program will be suspended while he undergoes treatment for COVID-19," Jiri Ovcacek, the presidential spokesperson said.

Zeman, who had received three doses of a COVID vaccine, showed no symptoms of the disease but would stay for observation, the military hospital said.

France has launched a plan to give COVID-19 booster shots to all adults amid rising infections in the country over the last few days.

Opting against a further lockdown or curfew, Health Minister Olivier Veran announced a reduction in the time gap between second and third shots from six to five months. He added that France already has enough vaccines to launch the nationwide booster campaign.

The European Commission has proposed a change in travel restrictions into the EU, saying the bloc should focus on travelers' vaccination status, rather than geographic zones.

It wants to do away with national travel restrictions, and allow fully vaccinated travelers to enter the EU, increasing consistency across the 27-member bloc.

Chile said it would start vaccinating children aged three and above against coronavirus. The country has successfully inoculated 90% of its initial target population.

Children are set to receive the Chinese CoronaVac shot already used for kids aged six to 15, the Public Health Institute said. For 16 to 18-year-olds, Chile uses the BioNTech-Pfizer vaccine.