Coronavirus digest: 'We can get our normal lives back' in 2022, says German health minister

German Health Minister Karl Lauterbach has reassured that there will be "a light at the end of the tunnel" in the pandemic this year. Elsewhere, new COVID cases have broken records in Italy. DW has the latest. 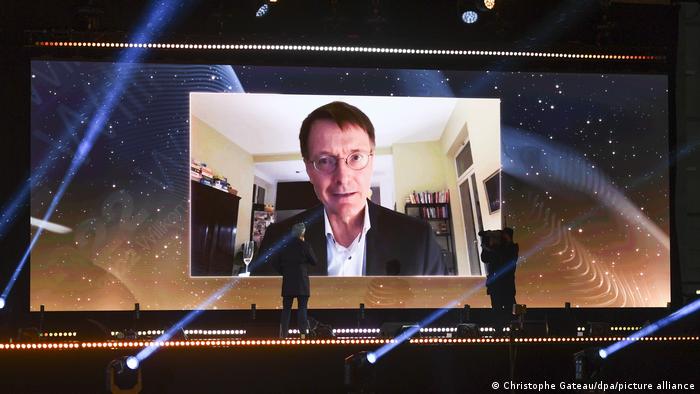 German Health Minister Karl Lauterbach has expressed cautious optimism about the coronavirus pandemic, reassuring there is "a light at the end of tunnel."

Speaking via video during a New Year's Eve show by public broadcaster ZDF, Lauterbach warned that the omicron variant poses a difficult challenge, but said, "It looks as though this variant could be somewhat less dangerous than the delta variant."

"But we don't know for sure because we don't yet know how dangerous the omicron variant is for those who are completely unvaccinated," he added.

However, Lauterbach told the German broadcaster "at no point in time" would there be a risk that the country's health system would be overwhelmed, or a situation "that would get out of our hands."

"I do believe that we can live with the coronavirus. That we can get our normal life back completely. That's what we're fighting for. And next year will be decisive for this," he said.

The health minister appealed to people to get vaccinated and also called for caution during New Year's celebrations.

Citing data from South Africa, Drosten told ZDF's "heute-journal" news program: "In a way, that can reassure us. South Africa is certainly a glimpse into a future, into an endemic situation, which is just getting started there."

"Unfortunately we are still a long way off," he added.

Here's a look at coronavirus-related news in other parts of the world:

In Germany, around 6,500 people joined a protest on New Year's Day in the western city of Düsseldorf to demonstrate against COVID vaccinations and restrictions. Local police said the demonstration was peaceful and that protesters wore masks during the march. The demonstration comes amid rising COVID-19 cases that are being driven by the omicron variant.

German health officials said some 112,000 people were vaccinated on New Year's Eve, bringing Germany's basic immunization rate of a minimum of two doses to 71.2% of the population, according to the Robert Koch Institute (RKI).

What challenges can the world expect in 2022?

Italian news agency ANSA reported that the new infections brought the total number of people currently infected with the virus to over 1 million.

Just a few weeks ago in mid-December, Italy was registering below 30,000 new cases daily before the holiday season.

The Aida Nova ship was unable to reach the port of Funchal on the island of Madeira causing the passengers to miss the planned fireworks display.

In the UK, Liverpool coach Jürgen Klopp will not attend Sunday's English Premier League soccer match against rival Chelsea after he received "a suspected positive COVID-19 test result." Klopp, originally from Germany, is now waiting to get his test confirmed.

England also recorded yet another record number of new infections on Saturday, reaching 162,572 in a single day. The data does not include other parts of the UK. The number of deaths was slightly down from the previous day, however, at just over 150.

Johnson in New Year's message: 'Get that jab!'

The United Arab Emirates (UAE) said unvaccinated citizens would be prohibited from traveling abroad due to the global spike in COVID-19 cases worldwide. Vaccinated citizens will require a booster shot if they wish to travel. The ban will take effect on January 10.

In the United States, the New Year's Day Rose Parade in Pasadena, California is back on after a year's hiatus due to the pandemic.

Singer LeeAnn Rimes kicked off the parade with a performance of "Throw My Arms Around the World," and actor LeVar Burton served as grand marshal of the traditional New Year's Day parade.

The parade preceded the Rose Bowl college football game, which this year was played between the Ohio State Buckeyes and the Utah Utes.