The United States is reporting more than 100,000 daily infections nationwide as the delta variant surges in states with lower vaccination rates. The Philippine capital is entering a hard lockdown. Follow DW for more. 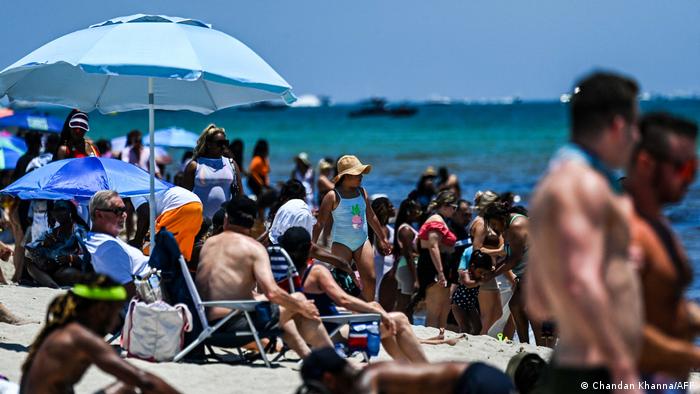 Despite becoming a hotspot for infections, the southern US state of Florida has imposed few restrictions

Daily new coronavirus infections in the United States have jumped to the highest number in six months.

More than 100,000 new cases have been reported across the country. The rise comes amid surges caused largely by the highly contagious delta variant, particularly in Florida and other states with lower vaccination rates than the rest of the US.

The country's top infectious disease expert Anthony Fauci announced that efforts were underway to give citizens with weakened immune systems booster shots of COVID-19 vaccines as soon as possible. This means the US will join Chile, Germany, France and Israel in offering booster shots, a move opposed by the WHO until more people across the world can receive at least a first dose.

Here are some more developments on the coronavirus front from around the world:

Germany's public health agency, the Robert Koch Institute, on Friday reported 3,448 coronavirus cases for the past day, bringing the total number of cases in Germany to 3,784,433 since the pandemic began. The death toll rose by 24 to 91,754.

The seven-day incidence rate per 100,000 people climbed above 20 for the first time since spring. 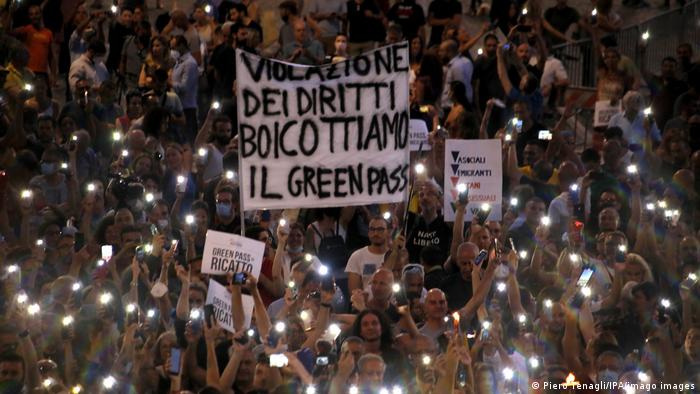 The 'green pass' has met with considerable resistance in Italy

Southern France has been designated a high-risk area, by Germany's RKI. As a result, people will need a negative test or proof of vaccination or recovery from COVID-19 to avoid quarantine when entering Germany from southern France.

The areas of France that are now under the high-risk designation are Occitanie, Provence-Alpes-Côte d'Azur, Corsica and the overseas territories of Guadeloupe, Martinique, Réunion, Saint Martin, Saint Barthélemy.

The European Medicines Agency (EMA) recommended that several adverse reactions be added to the warning labels of the Johnson and Johnson (J&J) single-shot COVID-19 vaccine. Among the conditions, EMA listed immune thrombocytopenia, or low blood platelets, dizziness, and tinnitus.

Still, the EU health agency stressed that the benefits of J&J's vaccine still outweighed any risks, adding that it had analyzed 1,183 cases of dizziness and more than 100 cases of tinnitus to reach its conclusion.

Despite the surge in infections in the United States, thousands of bikers are converging in the Black Hills in the Midwestern state of South Dakota for the Sturgis Motorcycle Rally, which starts Friday.

Some 700,000 people are expected to attend —  240,000 more than last year — raising fears that the event could unleash a further wave of infections.

The White House announced that 50% of the US population is now fully vaccinated against COVID-19. Inoculations in the US have been on the rise for the past four weeks in response to the surging Delta variant.

In Australia, the southeastern state of Victoria with its population of 7 million entered its sixth lockdown since the pandemic began, weeks after exiting its last one.

Approximately 2,000 turned out in the state capital of Melbourne to protest. Almost two-thirds of Australia's population of 25 million is currently in lockdown, with Sydney also reporting a record number of new infections — 291 — for a second straight day on Friday.

The Philippine capital region is entering a two-week "hard lockdown" after being hit by a surge in COVID-19 cases fueled largely by the highly contagious delta variant of the coronavirus.

The lockdown will be in effect in the capital region of metropolitan Manila until August 20, but could be extended if the situation does not improve, authorities said.

In China,  President Xi Jinping has pledged to supply the world with 2 billion doses of Chinese vaccines this year. The country is already the largest global exporter of COVID-19 vaccines.

The figure quoted by Xi likely includes the 770 million doses China has already donated or exported already since September last year, according to the Ministry of Foreign Affairs. But it is unclear whether it also includes the 550 million doses provided by China under the United Nations-backed COVAX scheme, which aims to distribute vaccines to low- and middle-income
countries.

In South Korea, a nursing assistant who suffered paralysis after receiving the AstraZeneca COVID-19 vaccine has been recognized as a victim of an industrial accident. She is now eligible for government benefits and financial compensation.

The woman, who suffered from double vision and paralysis following her shot, was diagnosed with acute encephalomyelitis, according to the state-run Korea Workers' Compensation & Welfare Service. It is the first time such a case has been recognized in the country.

In Japan, Olympics organizers have recorded 29 new coronavirus cases linked to the Games, according to Friday's daily report. This comes a day after 31 cases were reported, the highest number since the Games began. No athletes were reported to have tested positive on Friday.

The total number of infections related to the Games now stands at 382.  About a third of the people who have tested positive overall are non-Japanese. As of August 4, 42,100 accredited people had traveled to Japan for the Olympic Games, according to organizers.

A study in South Africa has shown that the Johnson & Johnson COVID-19 vaccine offers up to 90% protection against fatal courses of the disease.

"We can report that the single-jab J&J vaccine protected between 91% to 96.2% of health care workers against death," said Glenda Gray, the joint lead investigator for the country's J&J trial.