Following spike in cases, groups of more than six people will be banned from meeting. Meanwhile, Israel began a week-long campaign of evening curfews and school closures in 40 zones. DW rounds up the latest. 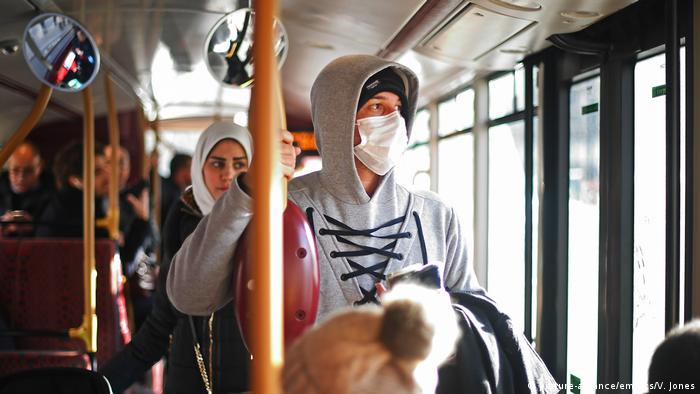 From September 14, groups of more than six people will be fined and banned from meeting in the United Kingdom. The new restrictions follow a sharp spike across the UK, that has been largely blamed on party-going youth.

Read on for a wrap of the other important developments around the world .

German vaccine maker BioNTech and eight biotech companies have vowed to "uphold the integrity of the scientific process" amid growing concerns they could succumb to political pressure. AstraZeneca also suspended one trial after "a potentially unexplained illness" in a participant.

Sex workers are back in businessin the northern German states of North Rhine-Westphalia, Hamburg, Bremen and Schleswig-Holstein after the coronavirus lockdown regulations imposed earlier this year were eased.

The Czech Republic recorded over 1,000 new infections in a day for the first time. Wednesday's count fo 1,164 new cases brings the country's total up to 29,877. The spike in Czech cases has been among the fastest in Europe, according to the European Center for Disease Prevention and Control.

Following this week's spike, the health ministry subsequently announced that mask-wearing would be made mandatory from Thursday.

Italian former-Prime Minister Silvio Berlusconi, who was hospitalized after contracting coronavirus, says he is battling against a "hellish disease."

"I am fighting to come out of this hellish disease, which is very ugly," he said, adding that he "hopes to make it and to make a comeback." Berlusconi, 83, has been hospitalized with the disease since Friday.

COVID-19 hospitalizations in France are on the rise, as the disease has spread at its fastest pace since it emerged in the country.

The number of people taken to the hospital with the virus was up by 43, increasing for the 11th day in a row to reach a one-month high of 5,003. The number of patients in intensive care units also rose by 25 to 599, a level not seen since the end of June.

US President Donald Trump was aware of the severity of the coronavirus threat in February when he was telling the nation that the virus was not worse than the seasonal flu, according to a new book by Washington Post journalist Bob Woodward.

''You just breathe the air and that's how it's passed,'' Trump said in a February 7 call with Woodward. The audio of the call was released to the media.

''And so that's a very tricky one. That's a very delicate one. It's also more deadly than even your strenuous flu,'' Trump is heard saying. ''This is deadly stuff,'' the president repeated.

Trump told Woodward on March 19 that he deliberately minimized the danger of coronavirus. ''I wanted to always play it down,'' the president said.

Woodward's book is based in part on 18 interviews that Woodward conducted with Trump between December and July.

Israel began a week-long campaign of night curfews and school closures in several towns and neighborhoods with high coronavirus counts. The curfews are in effect from 7 p.m. until 5 a.m.

Most of the 40 zones subject to the partial lockdowns are identified with Israeli Arabs or ultra-Orthodox Jews, minorities where crowding has helped spread the pandemic. Some government officials have called for a nationwide lockdown if the partial measures fail.

India announced the partial reopening of schools from Sept. 21 for students between 9th and 12th gade. The final decision will be left to parents, who will have to provide written permission for their children to go to school.

The decision comes despite India taking on the world's second-highest infection tally and a consistent rise in cases. The country has recorded over 4.3 million cases and a death toll of nearly 74,000.

Thailand said it had tested nearly 600 people potentially exposed to the country's first domestic case in over three months, but has so far found no new infections. The 37-year-old man had worked as a nightclub DJ at three different venues in Bangkok in the two weeks before he tested positive on arrival in prison, following a recent conviction.

Nigerian resident doctors began their second strike of the year over pay and working conditions. Nigeria, a country of 196 million people,  has recorded over 55,000 cases and over 1,000 deaths.

Zimbabwe's biggest nurses union said it was encouraging its members to end a three-month strike over pay. The strike, which started in June, forced major hospitals to turn away patients.

The Zimbabwe Nurses Association, which ahs more than 16,000 members, called for the strike to force the government to pay US dollar salaries in light of an 800% inflation rate, but authorities say they are unable to do so.

Brazil's acting health minister, Eduardo Pazuello, said that a vacccine would be rolled out for all Brazilians in January 2021. President Jair Bolsonaro earlier said that taking the vaccine would not be compulsory once it is available. Brazil has the third-highest infection tally, with over 4 million confirmed cases and over 127,000 deaths.

Venezuelan President Nicolas Maduro has proposed giving 14,400 election candidates a Russian vaccine "so that they can take to the streets and campaign from neighborhood to neighborhood safely," he said in a televised speech.

German car industry officials have met with the government to discuss more state aid. The coronavirus pandemic has added urgency to solving problems that are compounded by the industry's struggles with transformation.

In Germany, coronavirus skeptics are marching alongside right-wing extremists and conspiracy theorists in mass protests. Watch our exclusive report: