The Saudi government has lifted social distancing measures, allowing full-capacity attendance at the Grand Mosque in the holy city of Mecca for the first time since the start of the pandemic. Follow DW for the latest. 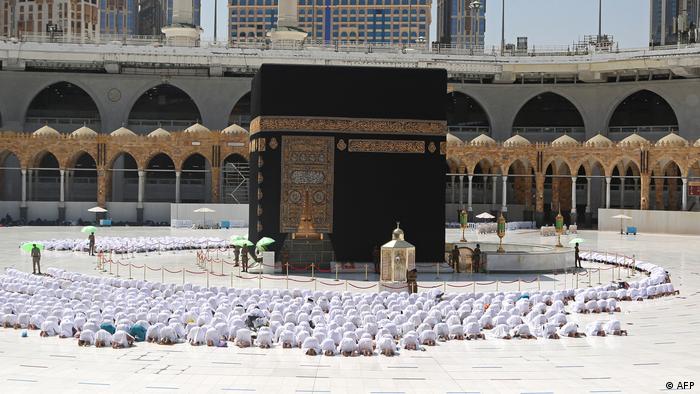 The Grand Mosque in the Muslim holy city of Mecca in Saudi Arabia operated at full capacity on Sunday for the first time since the coronavirus pandemic began.

"This is in line with the decision to ease precautionary measures and to allow pilgrims and visitors to the Grand Mosque at full capacity," reported the official Saudi Press Agency (SPA).

Saudi authorities said visitors must be fully vaccinated against coronavirus and must continue to wear masks on mosque grounds.

The Kaaba — the black cubic structure in the center toward which Muslims around the world pray — remained cordoned off.

The kindom also announced that from Sunday, fully-vaccinated people can attend sports events at all stadiums and other sports facilities, reported the SPA, adding that face masks are no longer mandatory in most open spaces.

Saudi Arabia has recorded over 547,000 coronavirus infections with 8,760 deaths.

The UK has reported 45,140 new cases of COVID-19, the highest daily number since the middle of July, and 57 new deaths within 28 days of a positive test, according to official data.

Russia is reporting its largest daily number of new COVID-19 cases, more than 70% up on the number a month ago, as it faces a sustained rise in infections.

The national coronavirus task force said 34,303 new infections were reported in the previous day, compared with the 20,174 recorded on September 19.

The death toll of 999 was slightly below the record of 1,002 deaths reported on Saturday.

Russian authorities have tried to speed up vaccinations with lotteries, bonuses and other incentives, but vaccine skepticism and conflicting messages from officials have hampered efforts.

COVID-19 in Russia: Highest daily deaths and infections yet

The Australian city of Melbourne is set to ease one of the world's longest COVID-19 lockdowns by lifting its stay-at-home orders this week, officials announced on Sunday.

By Friday, the city of 5 million people in the southeastern state of Victoria will have been under six lockdowns, totalling 262 days since March, 2020.

While COVID cases keep increasing in Victoria, the state's double-vaccination rate is on track to reach 70% this week, allowing for the ease in restrictions.

Public sector employees in Egypt will soon have to be vaccinated against COVID-19 or take a weekly coronavirus test to be allowed to work in government buildings, according to a Cabinet statement.

The rule is expected to apply from November 15.

US real estate tycoon and convicted murderer Robert Durst has been hospitalized after contracting COVID-19.

Durst,78, was sentenced to life in prison just days ago for killing his best friend in 2000. His lawyer told media outlets that Durst was on a ventilator. Additional details about his condition were not immediately available.