A booster dose of the Johnson & Johnson COVID jab increases its efficacy rate to 94%, the drugmaker said. The company is expected to state its case to US regulators. Follow DW for the latest. 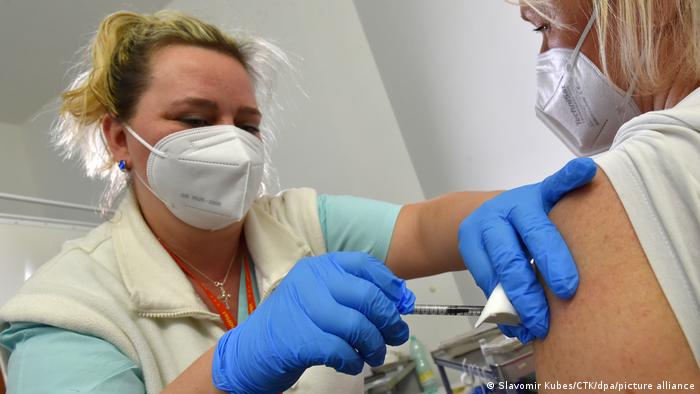 In the United States, pharmaceutical company Johnson & Johnson said a second shot of its COVID-19 vaccine given two months after the first dose increased efficacy to 94%. This was found to be the case against moderate to severe courses.

A single dose has been found to give 70% protection.

"A booster dose of the Johnson & Johnson COVID-19 vaccine further increases antibody responses among study participants who had previously received our vaccine,'' said Dr. Mathai Mammen, head of research and development at J&J.

US President Joe Biden has been pushing for widespread booster shots, but his vaccination campaign received a blow last week, when a panel of experts advising the US Food and Drug Administration, recommended against booster shots for younger population groups.

The demonstrators moved through the city center, throwing bottles, lighting flares and attacking police cars as they chanted slogans against COVID-19 vaccines and lockdown measures.

Melbourne has been under lockdown for seven weeks as the city struggles to control the spread of the highly infectious delta variant.

Vietnam relaxed some coronavirus restrictions in Hanoi on Tuesday, after two months of lockdown. Under the new order, government offices, markets and essential services such as banking and takeaway restaurants are allowed to open.

Germany has recorded 4,664 new COVID-19 infections, taking the country’s total tally to 4,150,516, according to data from the Robert Koch Institute for infectious diseases. With 81 deaths reported, the fatalities have risen to 93,052.

Canada's prime minister, Justin Trudeau, is set to remain in power with a minority government after a snap election. Trudeau said he won a clear mandate to govern Canada through the pandemic.

"You are sending us back to work with a clear mandate to get Canada through this pandemic and to the brighter days ahead," Trudeau said as his main rival conceded the election. "What we've seen tonight is that millions of Canadians have chosen a progressive plan."