Amid a surge of cases caused by the omicron variant of the coronavirus, 34 countries are reporting record numbers of weekly cases since the start of the pandemic. Follow DW for the latest. 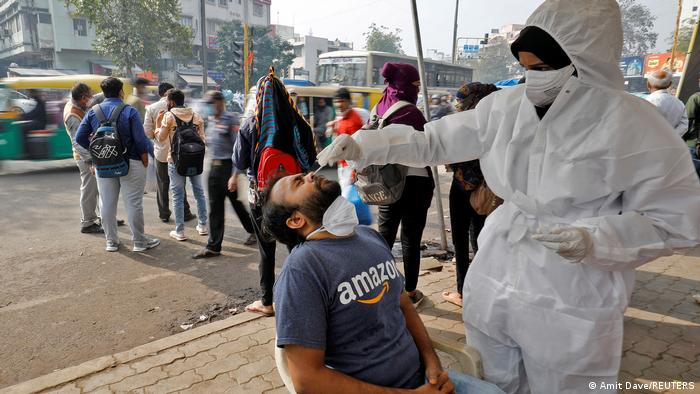 In the past seven days, 34 countries have recorded their highest number of weekly cases since the start of the pandemic. This includes 18 countries in Europe and seven in Africa, as reported by the AFP news agency.

The world recorded 13.5 million cases in the last week alone, which is 64% higher than the previous seven days. At the same time, the global average of deaths dropped 3% over the past week, in line with reports that omicron causes less severe illness than other variants.

France's public health authority said Friday that the risk of hospitalization from omicron was around 70% lower.

However, due to the sheer number of cases, experts expect the spread of omicron to overwhelm health systems worldwide.

He added that "the tsunami of cases is so huge and quick, that it is overwhelming health systems around the world."

British soldiers were deployed to hospitals in London to alleviate severe staff shortages caused by the COVID-19 omicron variant.

The United Kingdom's Ministry of Defense said on Friday military medics would assist with patient care while other troops help to fill gaps caused by other absences.

The deployment underscores the impact of the new omicron variant on Britain's health service. Nearly 180,000 people in the UK were infected on Thursday.

"We have never known this level of staff absence before," Chaand Nagpaul, council chairman of the British Medical Association, told Sky News.

Prime Minister Boris Johnson said this week that hospitals were on a "war footing" due to staff shortages, with many hospital groups declaring "critical incidents" because of the threat to essential services.

On Friday, the Royal College of Nursing's director for England, Patricia Marquis, said the deployment was "too little, too late."

"This is a clear admission that the NHS is not coping," she said. 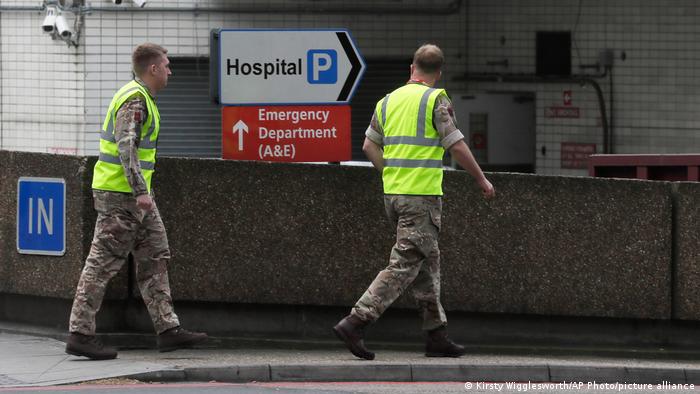 In Germany, Chancellor Olaf Scholz and the country's 16 state premiers have agreed to implement new restrictions in response to a surge in omicron cases.

Patrons will now need to provide a negative COVID test or proof of a booster shot to enter restaurants and bars.

Scholz and the state leaders have also shortened self-isolation periods over fears that critical services could grind to a halt as case numbers spike.

The chancellor said all 16 state leaders supported a general vaccine mandate and that the Bundestag would discuss drafts of such a mandate soon.

The proportion of adults in the European Union that are fully vaccinated against the coronavirus has reached 80%, the EU Commission said.

The EU Commission emphasized that it wanted to continue increasing the vaccination rate accross the EU and at the same time support vaccination campaigns in other countries.

Greece's government has issued an emergency order which will require some private doctors to support the state health service.

The order will take effect on Wednesday and is designed to help deal with staffing shortages in public hospitals. It applies to doctors specializing in pathology, pulmonology and anesthesiology in four regions in northern Greece.

Austrian Chancellor Karl Nehammer said on Friday that he had tested positive for coronavirus.

Nehammer is in isolation and is not currently exhibiting any symptoms.

As China reported a decline in new COVID infections on Friday, officials have warned hospitals and health care facilities against turning away patients.

Chinese Vice Premier Sun Chunlan said she was "pained and deeply ashamed" to hear about the difficulties people were facing in securing hospital services in Xian, a city of 13 million in northwest China.

"Medical institutions [...] must not simply turn away patients on any excuse during COVID control," Sun said.

How do you identify virus variants?

India has recorded 117,100 new daily infections on Friday, a five-fold increase in a week. This number, the highest reported in the country in over seven months, has been spurred by the fast-spreading omicron variant.

Despite a rapid increase in cases, a Calcutta court permitted on Friday the celebration of one of Hinduism's largest festivals.

A ban was requested by a Calcutta doctor who was worried that the festival could turn into a "superspreader event," but the court declined to forbid the festival.

It instead asked the government in India's eastern state of West Bengal, of which Calcutta is the capital, to post notices warning pilgrims of the risks of attending.

Hundreds of thousands of pilgrims are expected to come to the annual Gangasagar Mela festival, which begins on Saturday and may stretch on for days.

Thailand has announced an extension to the suspension of its quarantine waiver program, adding new restrictions after a spike in new coronavirus cases.

However, existing applicants of the country’s "Test & Go" waiver scheme can enter Thailand without quarantine until January 15, the COVID-19 taskforce announced.

Authorities in Sri Lanka have begun vaccinating children aged 12 to 15, as experts warned of a new wave of infections in the coming weeks. Children will be given a single dose of the BioNTech-Pfizer vaccine, the Health Ministry said.

The authorization comes as schools get ready to fully reopen from Monday.

Japan has declared quasi-emergency measures in three regions to curb a surge in infections that may be linked to United States military bases in the country.

These are the first such measures since September, when the country lifted emergency controls that had been in place for most of last year.

Under the new order, non-urgent elective surgeries will be paused until mid-February.

"Today we are making some sensible and proportionate changes as we move through this next period as the peak of omicron comes through," New South Wales Premier Dominic Perrottet said at a briefing on Friday.

Close to 100,000 children in Peru have lost at least one parent or primary caregiver to COVID-19, the government has reported.

"Unfortunately our country has almost 98,000 children who lost their father, mother or guardian during the pandemic," said Peruvian Minister of Women Anahi Durand, citing figures from The Lancet medical journal.

Costa Rican President Carlos Alvarado has announced that health authorities will begin vaccinating children between the ages of 5 and 11 against COVID-19 on January 11.

Brazil's president, Jair Bolsonaro, has criticized the country's health regulator Anvisa for authorizing the vaccination of children between the ages of 5 to 11. This comes a day after his health minister unveiled plans to begin inoculating that age group.

How could Europe stop omicron?

COVID-19 hospitalizations in the United States are set to hit a new high as early as Friday, according to Reuters.

This would surpass the record set in January of last year.

The United States reported 662,000 new COVID-19 cases on Thursday, the fourth highest daily total in the United States. Three days earlier, there was a record number of nearly 1 million cases.

Hospitalizations have increased steadily since late December as omicron overtook delta as the dominant variant in the United States.

The Biden administration measure would require that workers at companies with more than 100 employees either be vaccinated or get tested weekly. This would apply to more than 80 million workers in the US.

The Egyptians delayed their departure to the tournament in Cameroon following infections in the team.

Coach Carlos Queiroz wrote on Twitter: "Better we stand together and focus on what we need to do to meet the challenges."